It’s almost time to start seeds for this year’s garden. I’ve got about two weeks to get some pots ready — we’ll get the peppers, asparagus, celery, and verbana started. There are a few herbs that we can start too — oregano, rosemary, and thyme. I’m not growing any eggplant this year.

It’s important to remember the difference between capitalization through offering shares and market value. Say I have a company that I’m going to take public. Forget all the real-world stuff that goes into an IPO — I put one million shares of my company out there with a target price of 10$ a share, and initial investors purchase all of the shares at my target price. I now have ten million bucks in exchange for the investor’s interest in my company. Now you want to buy a share of my company. I had a million shares and sold them all. You aren’t buying a share from *me*. You go to someone who owns shares in my company and offer to buy one. Well, they paid 10$ yesterday, so they’re not going to sell that share for ten bucks. You offer them 11$, though, and they say ‘sure’.

My company is doing well (“the fundamentals” are good), people anticipate I’m going to start offering dividends or I’m going to start using a new manufacturing technique and reduce cost by 10%. A lot of people want shares, so they start offering to pay 20$ for a share. And plenty of people who paid 10$ a share want to bank their profits, so there are shares available to buy. Even though my company shares are selling at 20$, which makes my market capitalization twenty million dollars, I only have ten million of that. The other ten million went as profit to investors who sold shares. Same when the stock price goes down — I’m not hitting sales targets, my planned IP filing doesn’t go through, etc and shares are down to 5$ … I still got that ten mil from my IPO; investors just own their share of my company with a value of 5 mil.

A company that isn’t doing well can still be worth millions on paper. This is where short selling comes in. Think about buggy manufacturers when automobiles became “a thing” — if they were publicly traded companies, you could have anticipated that the value of the stock would go down. You borrow a share of Lisa’s Buggy Company from someone — it’s worth 10$ today. You sell it and pocket the ten bucks. A month from now, you buy a share of Lisa’s Buggy Company for 3$ and give the repurchased share back. You’ve score 7$. Now, realistically you don’t just find someone who owns a share and borrow it from them. You ‘borrow’ the share from a brokerage. You pocked 9.50$ initially because you give the brokerage 0.50$ for letting you ‘borrow’ that share for a month (like interest when you borrow money).

If you borrow a 10$ share and are going to return it in a month, no one knows how much that’s going to cost you in a month. You’re hoping it’s less than 10$. But, in a case like GameStop, that 10$ share you borrowed is worth 320$. Brokerages hold what amounts to cash collateral to cover your short — because they don’t want to be out that 320$ share when you cannot afford to repurchase it. And, as the share value goes up, they may need more collateral to cover your short. At some point, you just don’t have any more cash to throw into collateral. You’re screwed (and have to repurchase those borrowed shares at whatever the price happens to be now). Or the broker doesn’t want to keep risking it — they call in their loaned share so they can sell it and keep the 320$.

Thing is? Having shares trading at a couple hundred bucks instead of a couple bucks doesn’t change the real trajectory of in-person retail sales of physical game media and equipment (i.e. the underlying logic that led investors to short GameStop in the first place). It doesn’t give GameStop half a billion dollars they can use to move into a new, more profitable, market space. AMC are an interesting, somewhat similar, case. AMC have, to a lesser extent, gone through the same thing as GameStop. Except they also happened to have planned to issue an additional fifty million (or so) shares of stock to raise money. Had the offering gone through when the stock was trading at 2$, they’d have only raised another 100 mill. Had they hit the 20$ a share price the stock peaked at, they’d have raised a billion. IIRC, they brought in a little over 300 million — enough to wipe out a bunch of debt and probably secure operations through the pandemic (if that means summer/autumn). And, I expect, there are a LOT of people who (once vaccinated) are really eager to go do *things* like overpay for popcorn while watching movie on a big screen. This FU investing to screw over massive shorts may have saved the company.

We’ve been using zap2xml.pl to pull TV listings into our MythTV installation for years. Yesterday, we noticed there wasn’t much scheduled to record. When I went to investigate it today, I found that there weren’t listings past Thursday. Running the zap2xml script manually, I see a bunch of 503 Backend unavailable errors. Checked the URL and, yeah, that’s a legit error.

So I had to quickly switch to a different source for listings. I found a Github project that generates the XML file we need. The same mythfilldatabase command (/usr/bin/mythfilldatabase –file –sourceid 2 –xmlfile /tmp/listings.xml) pulled in the data without error. And, now that there are programs listed, MythTV plans to record things again.

We ordered a DigiBoil (well, we really ordered a DigiMash, but it turns out that’s a DigiBoil with the mashing kit) in November. We’ve still not managed to brew beer. Our first unit looked like it got mangled in manufacture. I rather question KegLand’s quality control process — the two fermenters we purchased had the butterfly valve handles installed backwards. Easy enough to take a wrench and turn them around, but it’s an odd oversight. And upside down doesn’t work since the handle would turn up into the fermenter plastic and stop before being fully turned.

We got a replacement DigiBoil, We washed the unit, then dumped in a few gallons of water to test it out. No leaks – great. Turn on elements — all three work, also great. Water boiling … awesome, except the temp readout was 203 degrees F. I know the temp at which water boils, so the temp  reading was obviously wrong. We measured the resistance on both thermistors and found the original one read lower than the one on the replacement. And the resistance went down as the temperature warmed up … so possibly the original one was better. We swapped the thermistor from the dented up unit — and water boiled at 206 degrees. Scott tried contacting KegLand to see if there’s some calibration on the controller (sealed behind the big sticker with a logo … not something we’d want to pull apart on a whim), but it seemed like they blew him off. We got a third DigiBoil and it, too, either has a bad thermistor or a miscalibrated controller. This is getting silly. They cannot/will not send us a thermistor or provide details about calibrating the controller. That would be a lot less effort for everyone involved. Three out of three thermistors report different, significantly wrong, temperatures at boil.

I thought I saw a robin yesterday, but I wasn’t able to get a picture of it. Today, though, we were outside working on the nesting boxes and I saw half a dozen robins in one of the trees. We need to make some suet and get the feeders out! 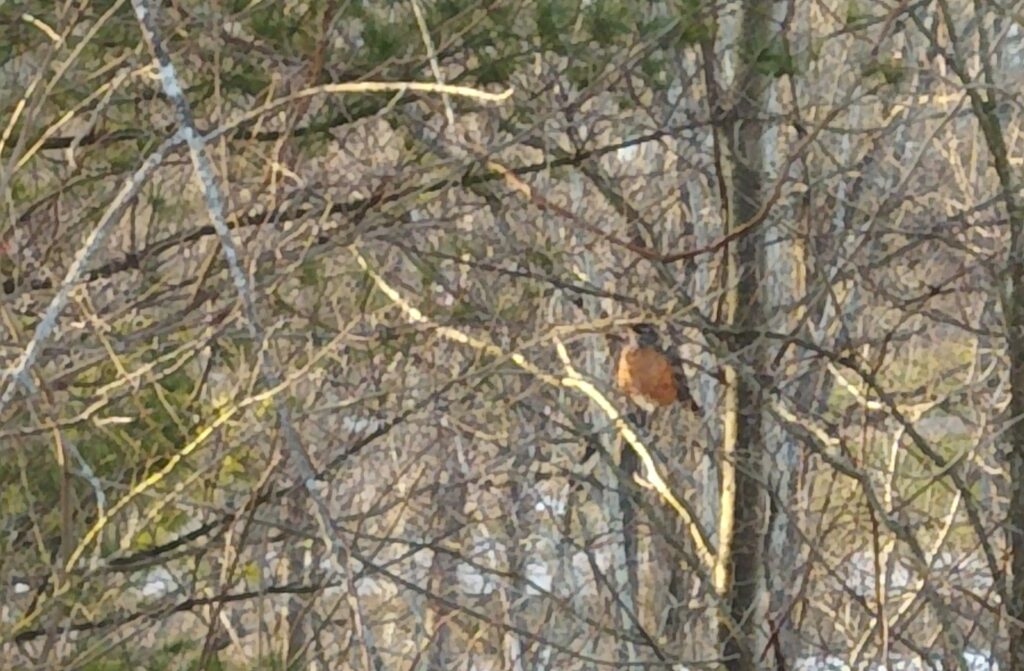 Evolution has the most microscopic text. Scott literally picks his computer up sometimes just so he can read the message. You get a lot of text on the screen … I guess. But it’s not really useful if you cannot read it.

(1) There’s a system-wide default font in KDE. Under the Fonts, there are setting for “small”, “toolbar”, “menu”, “window title” … they seem to default to 10 points (8 for small). That’s rather small on a high-resolution monitor.

(2) In Evolution, select Edit > Preferences
Select Mail Preferences from the left sidebar. Untick the box “Use the same fonts as other applications” and then pick a bigger font. This only changes the message text — the from/subject/date and folder structure are still using the system font.

Found a cool method for testing the efficiency of different approaches to a python expression — dis disassembles the call and prints the component steps. Here, we see that there’s not much functional difference between “not a=b” and “a != b”. 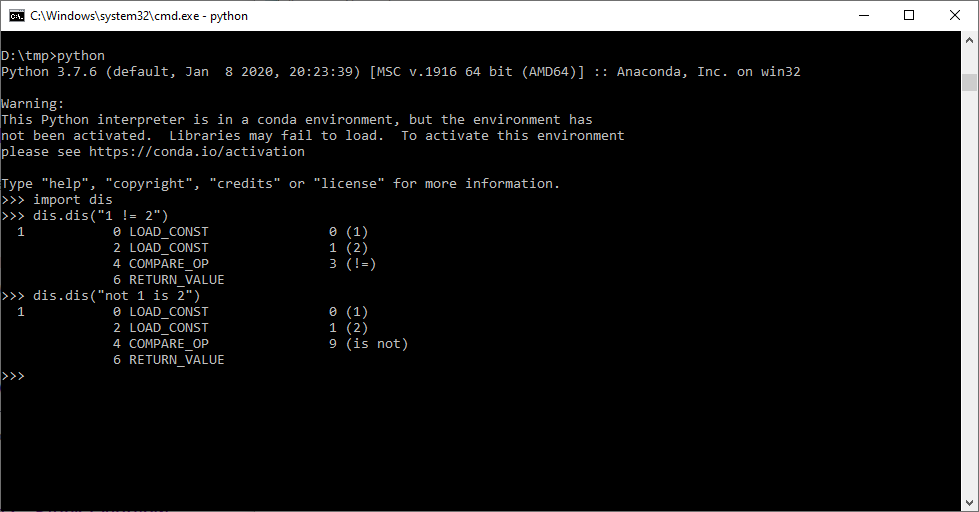 Can’t say I’ve needed to get an Outlook attachment into Teams myself – I try to store my files in OneDrive and e-mail links instead of e-mailing a copy of the file. When I need to update something, there’s no need to send an updated copy; and no one needs to figure out if they’re looking at the “right” version. Click the link now, and you have the right version. But there are certainly scenarios where you’d have attachments to share in Teams – especially if you interact with people outside of the organization. And you used to have to save the attachment and then share it into Teams. Not anymore – you can now drag attachments directly from Outlook into Teams (this works with the Teams web client too – but you cannot use the Outlook web client for this method. The message with an attachment needs to be opened in Outlook).

If you’ve got multiple monitors, this is easier … but, if not, shrink the Outlook window so you can see both the message and Teams. Then drag the attachment icon into the message composition box in Teams. You’ll see text that says “Drop your files here” appear in Teams. 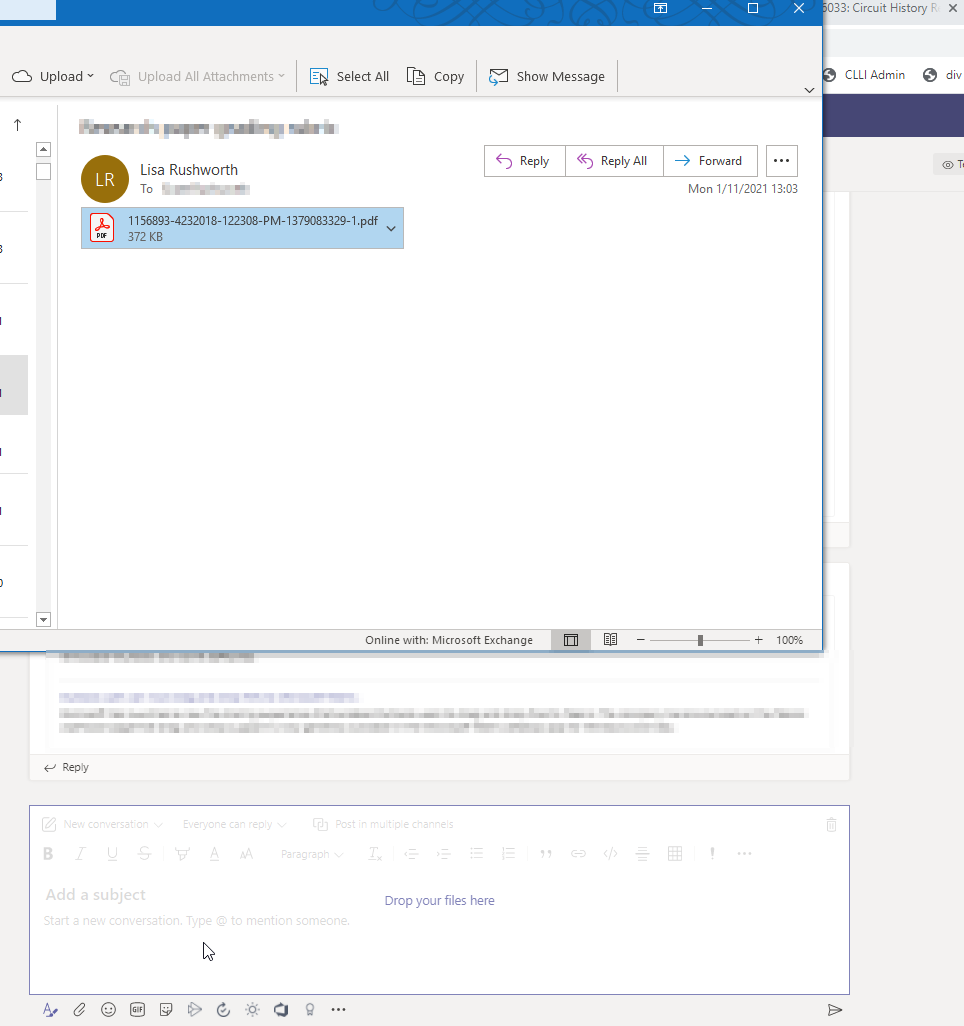 Release the mouse, and the file will be uploaded to Teams.

I didn’t realize you could show the underlying field codes in MS Word. I had a problem with my table of contents showing too many levels. Looking up how to more granularity customize the levels, I found the suggestion of using “ALT + F9” and manually editing the field code.