Because I made two not-permitted posts since Anya started the challenge, she’s extended it by ten days! October 7th is the last day of Anya’s rule about what I can post on my own website … the one I set up for myself, on my server, so I would have somewhere to store my stuff. Yeah.

Anya has made us a scavenger hunt complete with clues — clues that are encrypted! While working out a ROT-1 or ROT-2 decryption isn’t terribly difficult, it was getting a little time consuming [especially when what was advertised as ROT-1 was actually ROT-(25) and I had to do it all over again!], so I made a quick spreadsheet to decrypt strings. The letter pairs are in the first two columns, then VLOOKUP is used to convert the printed character to the actual one. I found a trick card! 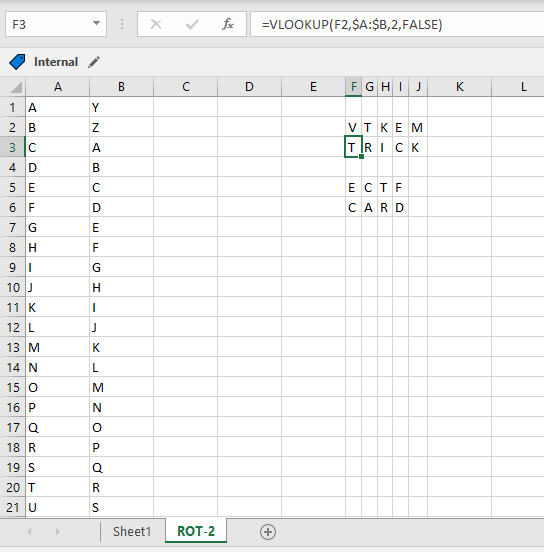 Anya made me a coconut custard for my birthday, and it was her first time successfully cracking eggs. I showed her how to do the first one, and she got the others cracked all by herself!

This year, Anya wanted a cranberry black forest cake. Which I didn’t really realize was a thing, but I found a recipe online. I used maple whipped cream between layers with maple glazed whole cranberries. It was tasty, but a little dry. If I were making it again, I would either soak it in some cranberry juice or some other liquid. 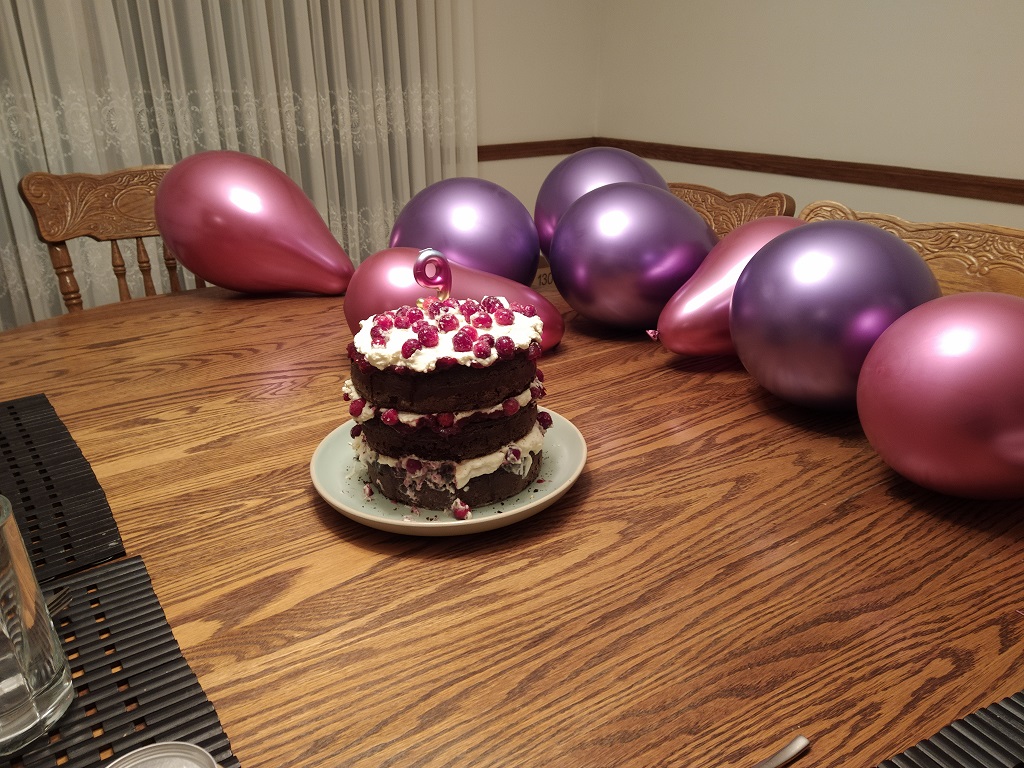 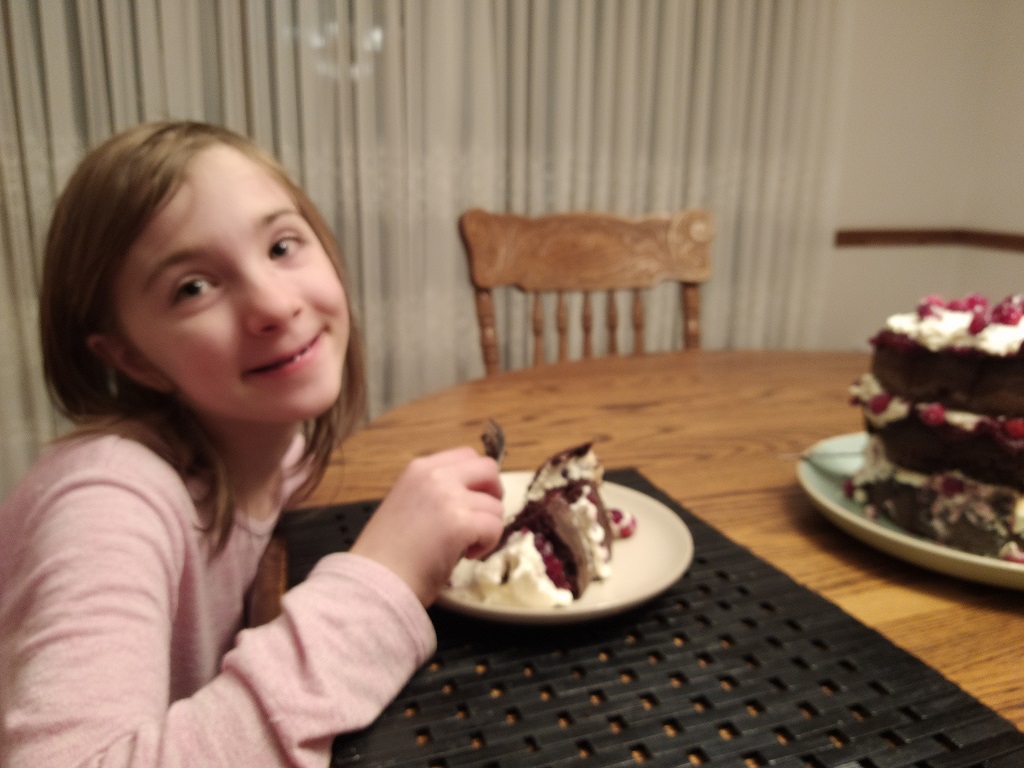 This year, Anya wanted a chocolate brownie for her cake … 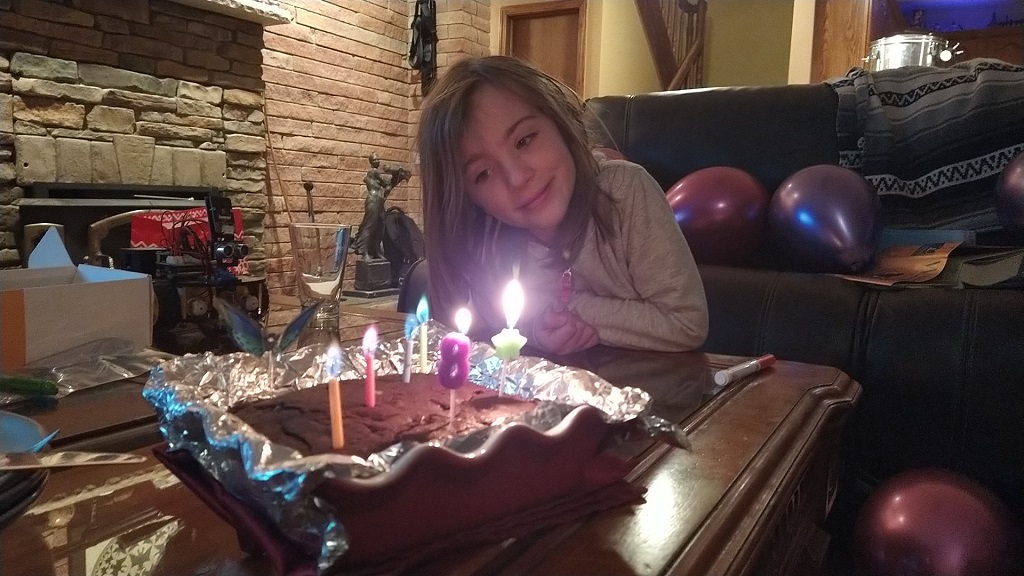 Scott had a business idea for Anya — mobile concession stand at the park next door. To me, it seems an easy sell in their off-season — have thermoses of hot cocoa and mulled cider. But he was thinking in the summer, selling their ice cream and bottled water.

For her birthday, I got Anya two kid cookbooks. She got to make her own cake this year! 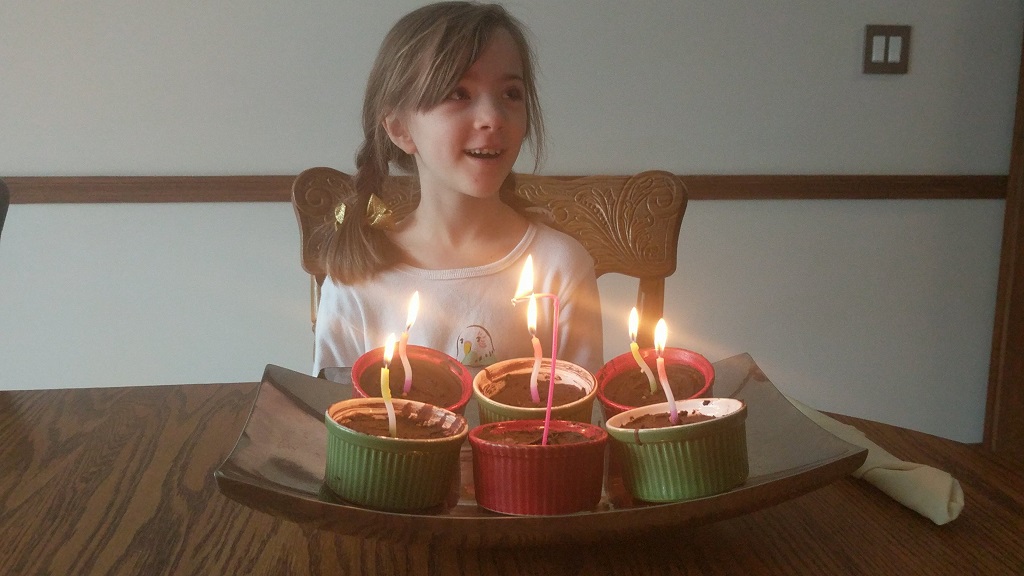 This year, I made a really cool apple cake for Anya’s birthday. It’s about 80% apple — very thinly sliced. 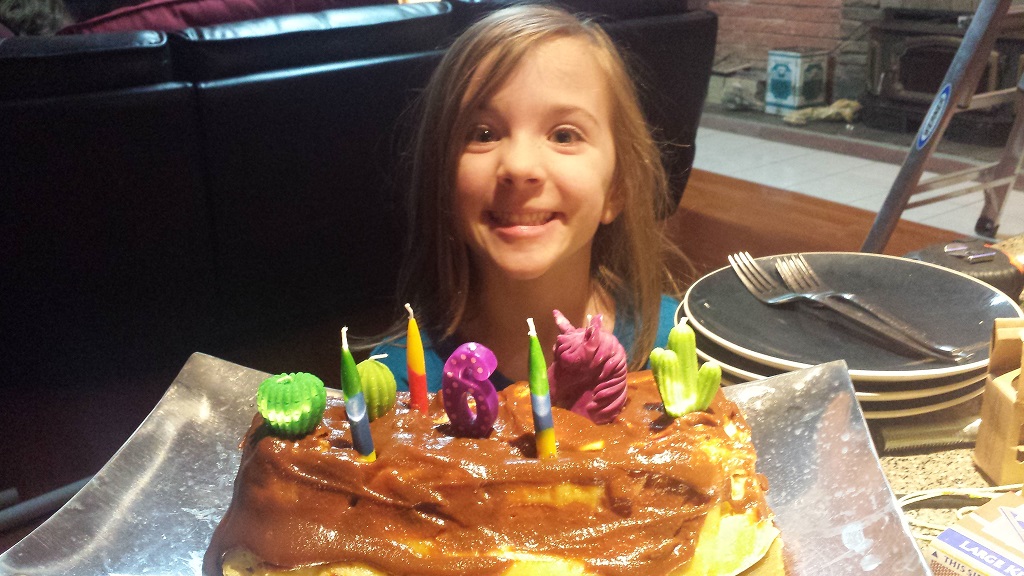 I made a cake with red beets for Anya’s birthday cake. I roasted the beets instead of boiling them. Then replaced the espresso with beet juice (mostly because I had it in the pan after roasting the beets). Finally I used 7 oz of carob chips along with three tablespoons of a triple cocoa powder blend. To make it a little fancier, I made a small layer cake with the mascarpone between the layers.

I covered the cake with a stabilized whipped cream flavoured with raspberry and added fresh raspberries to to the top. The cake what what I imagined a red velvet cake was before it became white cake with red dye – a deep reddish brown colour. Very moist and dense in spite of the whipped egg whites folded into it. 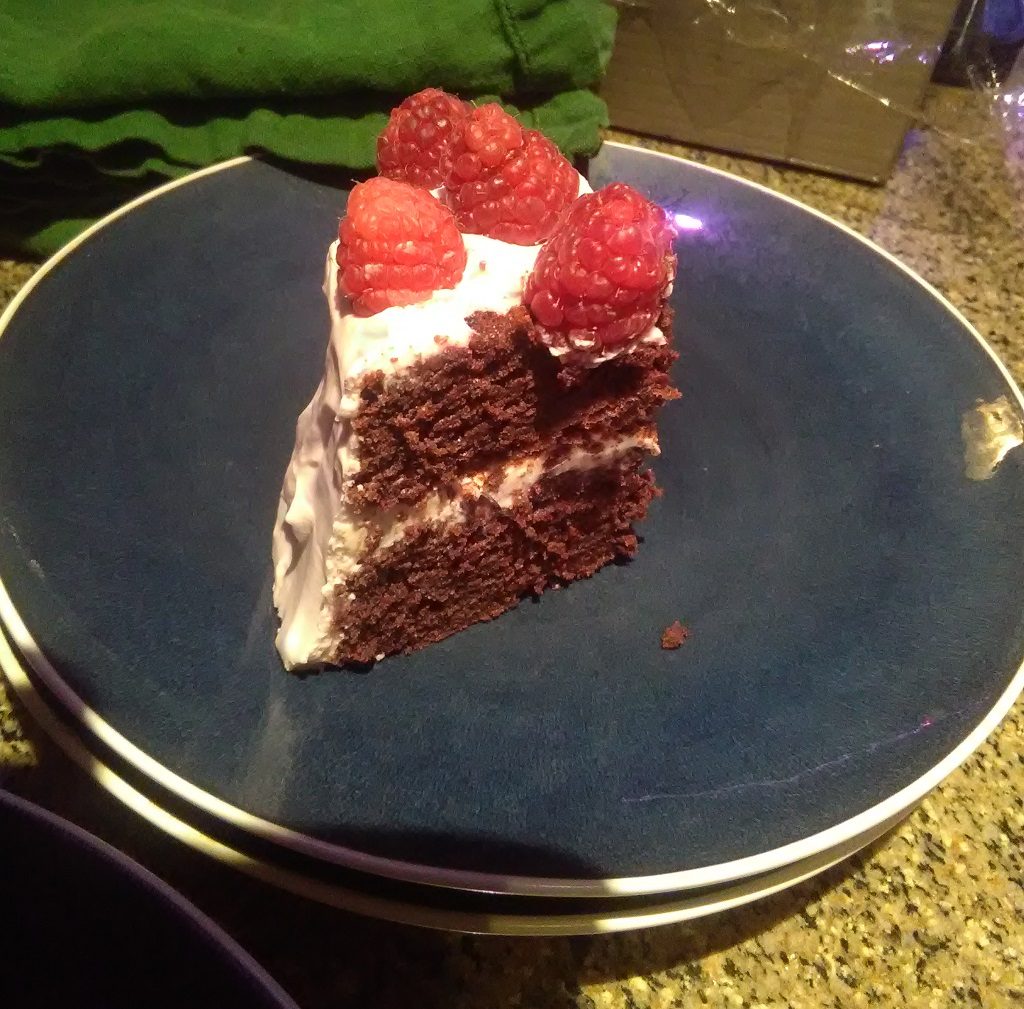 Dissolve gelatin in the raspberry purée.

Begin whipping the cream in a stand mixer. Slowly add in the sugar. Leave the mixer run and heat up the gelatin per instructions. Allow to cool a bit but don’t let it set. Drizzle raspberry mixture into cream and continue whipping to the soft peak state.

Since I was using this as a cake ‘frosting’, I immediately applied it to the cake and allowed it to set on the cake. Before the gelatin set: 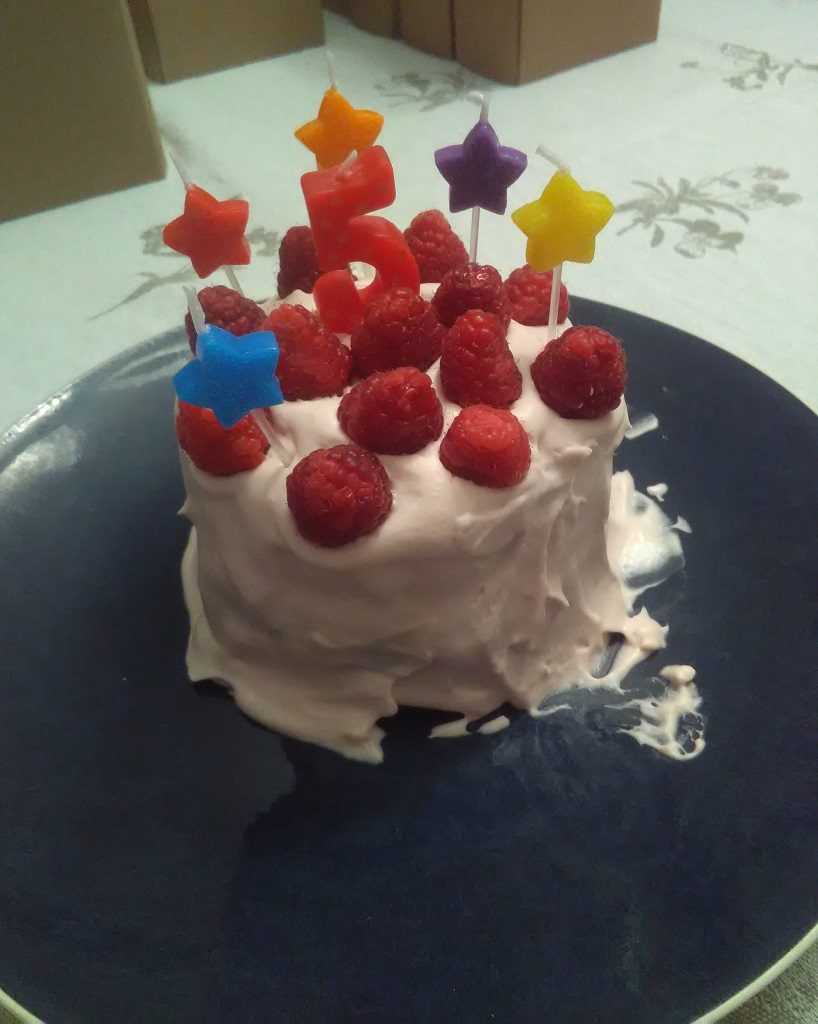 After gelatin has set:

Anya got to wear her new birthday party skirt too! 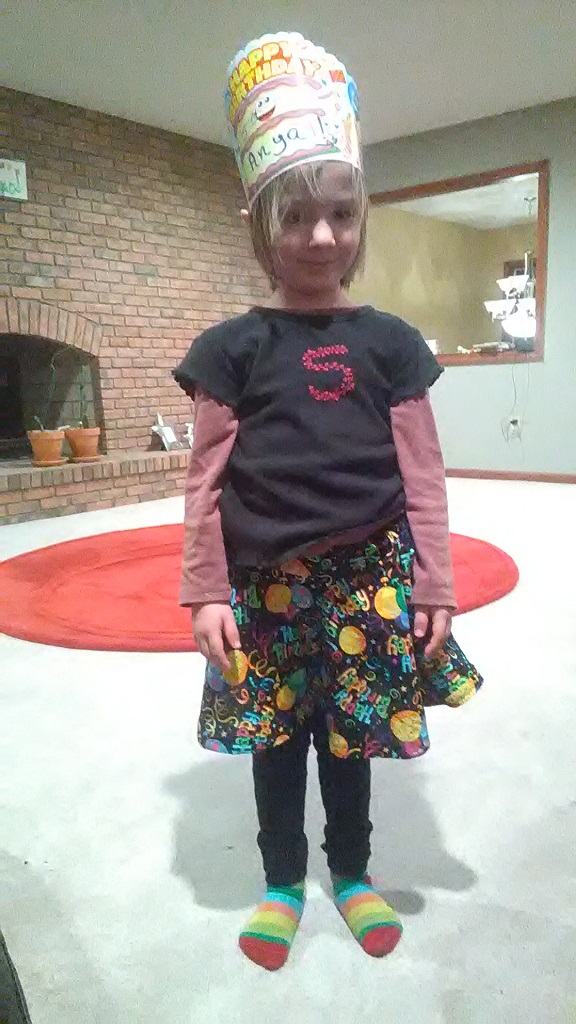 I purchased a pattern for Anya’s Easter dress almost a year ago. I wanted the bodice and outer skirt to be blue with a sparkly white fabric as the inner skirt. I am going to make a booster cushion for Anya, and I needed to add about ten dollars to my order to get free shipping. Fabric keeps 🙂

We have a bright-ish dark blue for the main fabric, and one of the Michael Miller Fairy Frost glittery fabrics for the inner circle skirt (which will also be used for the sash and bow). 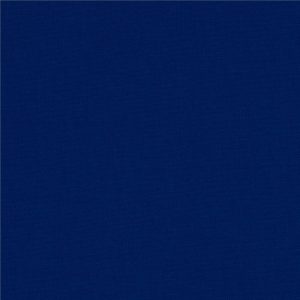 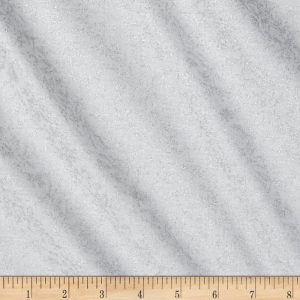