‘The report did warn that individuals from a far-right social media group had “called for far-right provocateurs to attack federal agents, use automatic weapons against protesters.” (The Nation is withholding the name of the group in order to not disrupt any potential law enforcement investigations.) ‘
The report basically says they’ve not found any evidence that Antifa is involved in the rioting. I guess we have the monolithic communism theory applied to extremist organizations. Monolithic extremism? Other non-entities are equally not involved — alt-right is a loosely defined association of a bunch of different groups to … it itself probably doesn’t have coordinated involvement in anything.
While they cannot link Antifa to the riots, the FBI did find a far-right group promoting violence. That is a logical extension of ‘Bernie Bros” — it’s not like a protest verifies the identity and online history of every participant to ensure they’re legitimately concerned about racial equality and/or police practices. But someone within a couple blocks of your protest loots Macy’s & you’ve become Antifa rioters to the MAGA crowd.

Using riot police to clear away peaceful protesters so Trump can get a photo of himself standing in front of a church holding up a bible doesn’t exactly scream “marketing genius” … https://www.npr.org/2020/06/01/867532070/trumps-unannounced-church-visit-angers-church-officials

Trump’s idea of “bringing safety and security and prosperity to America” is more frightening than the pandemic or riots.

Sometimes I wonder if Trump thinks this whole presidency gig is a spy movie and he scored the lead role because of his amazing work on the apprentice. How can someone in vague contact with reality think themselves beset with treasonous adversaries at every turn? (Also, who does *not* get Schiff’s ‘essence of the conversation’ from reading the released not-a-transcript.)

When Trump first trotted out his hypothesis that logging would have somehow saved the large swaths of construction from forest fires, I rolled my eyes and thought back to his campaign touted secret plan to defeat ISIL … which turned out to be consulting Generals. Which, as far as a military tactic goes is, worked about as well as all of the previous approaches (which, I suppose in his head, did not include this brilliant consulting step). Logging — which generally takes the big solid part of the tree (a.k.a. the trunk) and leaves behind all of the little bits (twigs, branches, leaves, underbrush) seems more apt to promote conflagrations — all of those little twigs, branches, leaves, and whatnot lay around, dry up … insta-kindling.

But yesterday’s proclamation that we’d be fine if we were only cleaning up the forest floor like Finland really bothers me. Not because of the obvious climate differences between a country averaging 27″ of rain (and I believe had an above average precipitation total last year) and an area that got, what, not quite 5″ in the last July-June season? Or the twenty or thirty degree temperature difference. But because of the absolute ignorance of international news. This is the sort of thing people at the White House get paid to keep track of. Finland had an unusual number of fires this last year.  Sweden too.

How a company, political organization, or non-profit spends their money doesn’t bother me that much — it’s a factor I consider when donating to “the cause” or purchasing from a company. I can appreciate that one feels betrayed when, say, some of your University tuition is used to pay off women and pizza delivery people who have been attacked by the school’s hockey team, thus suppressing reporting and criminal charges (then bragging to prospective students about the ZERO on-campus crime rate). Or the quasi-celebrity fronted charity uses donations to settle legal disputes involving the quasi-celebrity. Or your political party offers a decent salary to someone they simultaneously claim is a terrible employee who needed to be fired. *But* those were all choices you made. And you’re free to make new choices next time around based on new information. I can even see how it would really suck to believe the Republican party has the right way of things, and you *want* to provide financial support, but you also have to accept that some percent of your contributions are going to salary for unqualified individuals who they want to keep quiet.

What bothers *me* is that Trump has essentially admitted he handed a 179,700$ per year job to an utterly unqualified individual because of their personal relationship. 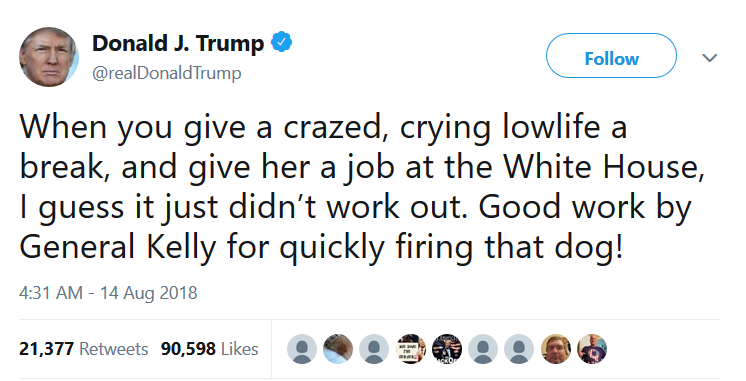 *I* didn’t chose the grifter-in-chief, but it’s still my tax money going to his friends (at that, to his “racist dude’s obligatory non-white, I cannot be a racist because Bob’s my friend” friend … although there are *whole binders full* of unqualified old white dudes grifting in Trump’s administration too.)

Our tax money going to political supporters who are unqualified for the job? That’s why we’ve got the Pendleton Act and the subsequent civil service system — every politician could find somewhere for their friends and supporters to suck up taxpayer money for a few years. And the inverse: a politician could garner key supporters by offering them cushy government positions. And an unlucky politician could garner a supporter who considered himself key, anger the chap by not giving him one of those cushy jobs, and get shot. Maybe it’s time to eliminate the remaining “at the pleasure of the president” job appointments.

I’ve thought of Trump’s EO on child separation like a fireman torching buildings and “saving” people from the inferno. But his actions are more like throwing the person a dodgy life preserver he knows was recalled a few years back and calling himself a hero as soon as the person touches the thing. Anyone bother dragging the dude to safety? Anyone care that the preserver takes on water and sinks ten seconds later? Nope – I threw the thing, so I saved the guy.

The Obama admin took the “family detention center” approach to the issue. Flores v Lynch 212 F.Supp.3d 907 (2015) found that this violated the 1997 Flores Agreement *and* ordered the release of (I’m too lazy to look up how many) both detained children and their parents. Flores v. Lynch, 828 F.3d 898 (2016) determined that the *parents* did not have an affirmative right of release under the agreement … and what do you do if you are legally barred from holding the kids but *could* hold the parents. You either separate families or release both parents and children.

So Trump signs an EO saying to take measures consistent with the law to avoid separating families. What’s that fix? Either they do what they are doing today (and cite Flores v. Lynch as REQUIRING they separate families because the kids are not actually being detained but rather waiting for accommodations whilst their parents are detained during their transit of the legal system) or they go the family detention center route & pretend like they’re trying to convince some judge how this is materially different than when Obama did it.

Because no one could foresee tragedy when dumping thousands of young kids in tents across a part of the country that gets more than a little warm. The forecast for Fort Bliss (oh, the irony!) on Saturday is 105 degrees Farenheit.

I wondered if this was the logic when he first started in about how it was the Democrat’s that were forcing the separation. Not that the Dem’s passed some laws forcing kids to be separated from parents but that the Dem’s refusal to just go along with asinine policies that don’t even do much to reduce illegal entries mean the trump administration “has” to do all of this terrible stuff. Good to see the master negotiator at work here. 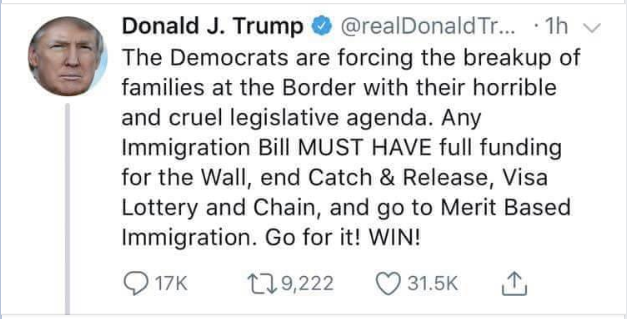 Curious, too, that *immigration* laws are going to deter ‘criminals’ whereas gun laws won’t. I’d almost give on immigration policies for the analogous gun control policy: a wall (longer waiting periods), merit based immigration (more background checks and reasons for denying ownership), ending lottery/chain (no gun or ownership is grandfathered)

Looks like reporters have been allowed in to the detention facilities for kids separated from their families for immigration violations —  and some Twitter commentary from one of the NBC correspondents.
Like the Russian sanctions that were enacted exceptionally slowly (allowing targets ample time to transfer assets around to minimize impact), it’s been over a week since Senator Merkley attempted to visit. That’s a lot of time to make the place look nice. And beyond the crazy murals (pretty sure the one on Twitter says “sometimes, in losing a battle, you find a new way to win the war” which … just doesn’t seem like a sentiment you want to convey to *kids ripped from their families and dumped into prison-like detainment facilities*), reporters think ‘prison’ when they tour the place. A step up from “dog kennel”, I guess, but remember these are the photos *approved* for release by HHS!
This report makes the recent initiative to house the kids in tent camps (on military bases & possibly other federal properties) more frightening. The current centers are licensed and operated by people who at least theoretically have some experience dealing with kids. Those tent camps – one of the things that makes them a quick solution is Trump & co don’t want to require licensed operators. What reporters see is the cleaned up version of what licensed professionals managed to do with an influx of kids. What do you think some random grifter looking to make a few bucks off the feds will manage? The whole thing reminds me of the ‘assembly centers’ for Japanese internment back in the 1940’s (WW2).
And if you’re not familiar with Japanese interment — started with Executive Order 9066 and more or less ended with a Supreme Court ruling, Endo v. United States (1944) (a ruling terrifying in and of itself — like the recent bigot baker case where the Court skips over the Constitutionality of the actual law to focus on comments made during the adjudicating process, the Endo case did not address the propriety of the underlying action — that is, they didn’t say the government was wrong to exclude people of a specific ancestry from parts of the country {an act which Korematsu v. United States (1944) upheld} but rather that the country could not continue to detain individuals who had been conceded to be loyal to the US). Which is all a very long way of saying we’ve been down this path before. It was repugnant to take American citizens and throw them into temporary encampments to “help” them relocate after they were excluded from the area where their home happened to be. The implementation ensured suffering — food shortages, overcrowded conditions, isolation from family.
A few years ago, EO 9066 was displayed next to Reagan’s act which officially acknowledged just how shitty the EO was and officially apologized for the evacuation, relocation, and internment undertaken in the EO. The juxtaposition of the two documents was a powerful reminder, in post-9/11 America, that actions which seem justified by ensuring the nation’s security are egregious violations of human rights and civil liberties.
Follow via RSS
Follow via Atom