Place frozen strawberries in a large pot, sprinkle with salt and drizzle with lemon juice.

Over medium heat, heat until strawberries begin to break down (stirring frequently).

Lower heat to simmer and cook until volume is reduced by about half.

Cool and refrigerate to store overnight.

I wanted to use the left-over turkey from Thanksgiving to make some quick(ish) pre-cooked freezer meals. Turkey pot pies sounded like a neat idea — make a couple batches of pie dough, saute a bunch of veggies, add diced turkey, and turn stock make with the bones into fresh gravy.

The first step was to dice up all of the left-over turkey — then put the bones along with some salt, onion, and garlic cloves in a pressure cooker to make a stock. I used a combination of roux and corn starch to thicken the stock into a gravy.

I diced carrots, broccoli, onion, garlic, and green beans and sauteed it all. Then mixed in corn kernels and the diced turkey.

After stirring in the gravy, I’ve got turkey pot pie filling.

I assembled a large pie for dinner.

Since the filling is wet, I blind baked the bottom crust for twenty minutes then filled the pie and added a top crust. The large one for dinner went into the oven. The six small pies were topped and put into the freezer to firm up.

Once everything was frozen, I used the vacuum sealer to package up my pies. Since I have ceramic mini pie plates, I need to take these out of the freezer and sit the package in a water bath to warm up the ceramic. Then bake at 350 F for about an hour for a simple (but not really quick) meal.

They turned out well — the extra baking of the mini pies made a nicely caramelized and crunch bottom crust. For next time, gravy absorbs into everything, so I need more gravy. And I think it would be a lot easier to have one larger pie instead of the three individual ones. Just need to pick up a few stainless steel deep-dish pie plates so I have something that can actually go from the freezer to oven directly.

I made chicken and dumplings (well, spaetzle) this evening. Pressure cooked chicken bones with some garlic, onion, and salt for an hour to make broth. Added sauteed onions, carrots, corn, green beans, and diced chicken. I thickened the broth with a little corn starch. And we each mixed in some hot pepper sauce to make it spicy 🙂 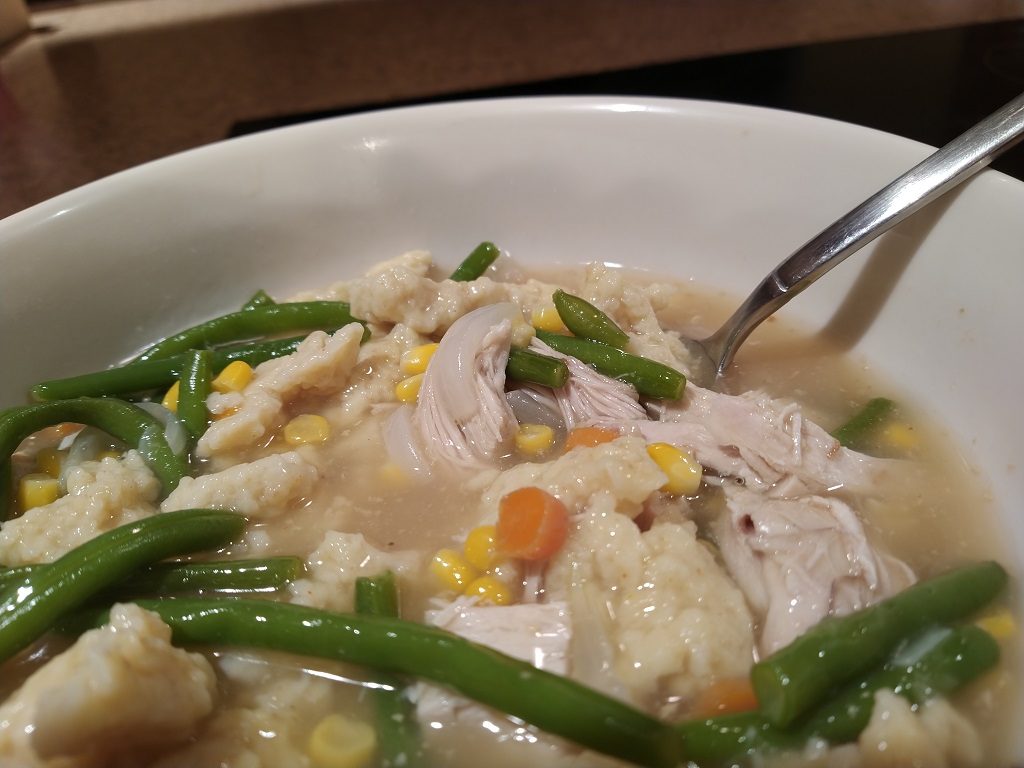 Mix all of the dry ingredients together. Mix the buttermilk and eggs together and add to dry ingredients. Blend well, then drizzle in melted butter and mix to combine. Cook in a waffle iron.

Mix the flour and baking powder together.

Mix the butter with sugar, salt and spices. Add the eggs one by one and mix well.

Cover the dough with plastic wrap and refrigerate for 12 hours.

Cut the dough into 4 equal pieces.

Thoroughly dust the work surface with flour and the rolling pin. Roll the first piece dough to a thickness of ¼ inch

Cut the dough with a knife or a cookie cutter and use the wooden or silicone mold to make some prints on the speculoos.

Place the speculoos on a baking sheet lined with parchment paper and bake for about 10 minutes.

Allow to cool for a few minutes, then place on a cookie rack to cool.