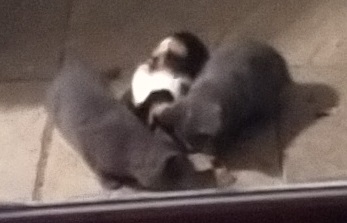 Ash had his first bath today — he was pretty calm. He wasn’t super thrilled to be walking around in a tub full of water, but he loved her rubbing soap into his pelt. Getting rinsed off wasn’t awesome, but he was happy to be snuggled in a fluffy towel and dried off. 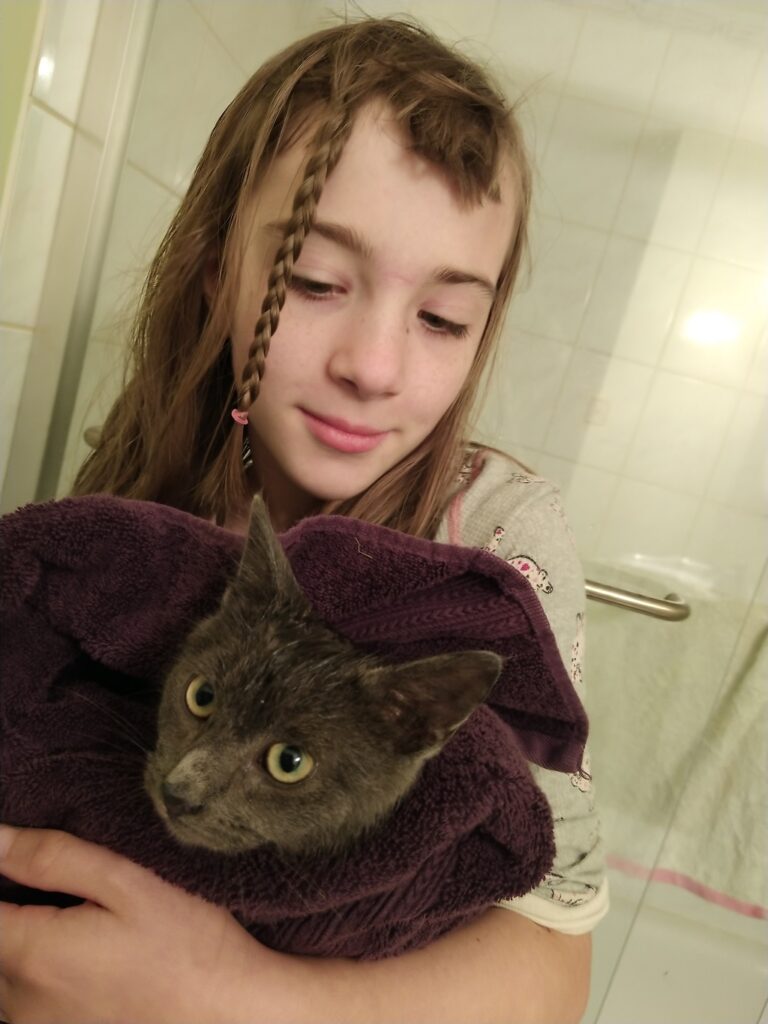 Anya got Ash back in the house! She fed him a big dish of tuna, and he let her pet him as he ate. She was petting his face and moved back down to pet his shoulders … and she picked him up and brought him back inside. I know she’ll be a lot more careful in the future so he doesn’t get outside until he really trusts us!

Ash got out today — and he’s really afraid of us outside. Hopefully he’ll come in again when it starts to get cold in a few days (20’s and 30’s overnight!) 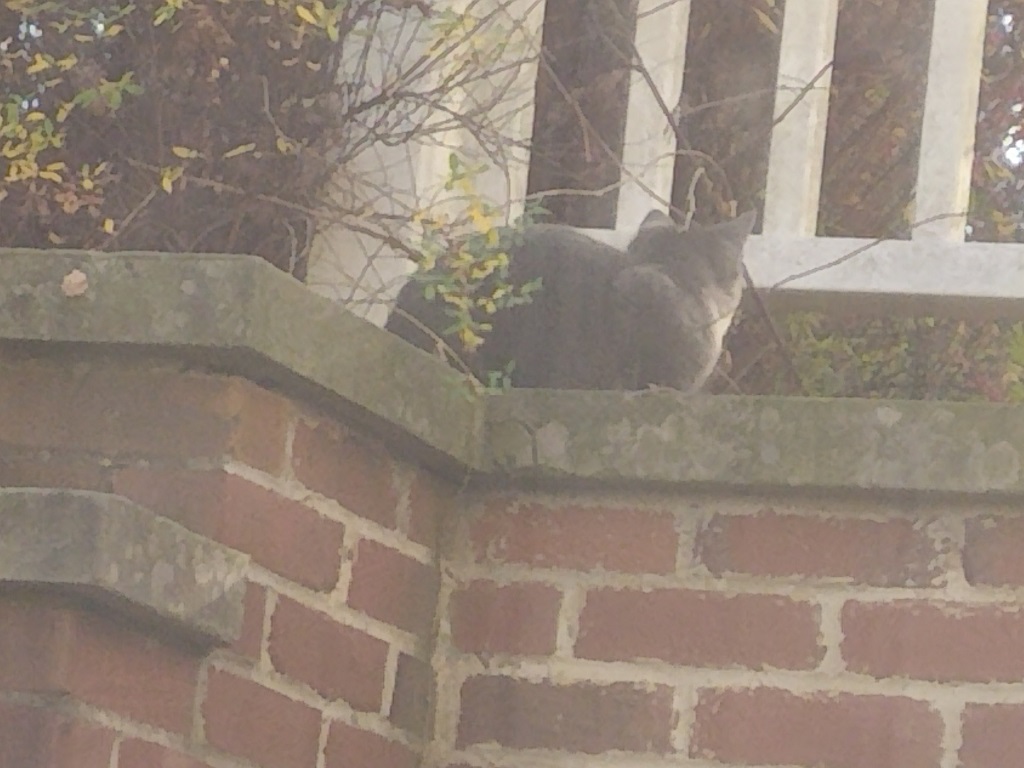 Ash is still a very snuggly kitten. Anya spends a lot of time holding him — she will read a book while he sleeps (and sometimes she naps too … I always tell her you know you are getting old when a nap sounds like a good idea, so now she tells me she’s getting old!) 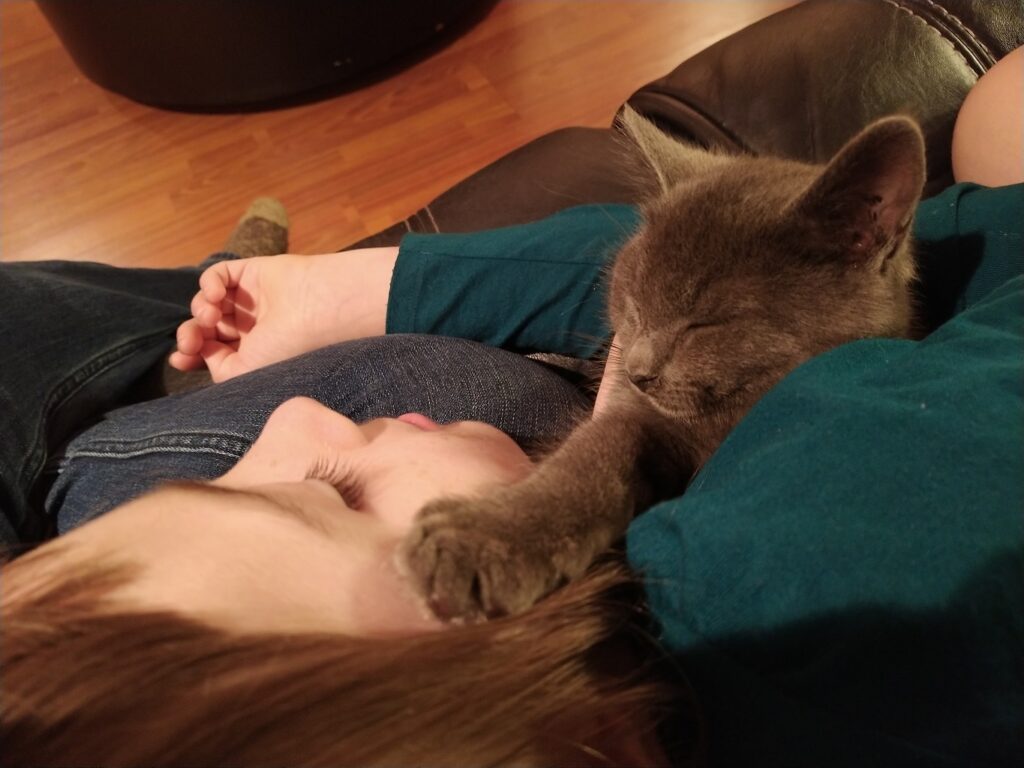 This is Ash — our rescue kitten. The Cali-Kitty had four kittens. They were all around on the 27th playing and napping. The morning of the 28th, I woke up really early — just after sunrise. One of the gray kittens was sitting under our garden cart. When he saw me move, he came over to the door and started crying.

This was odd because, just the day before, Anya had observed that we’ve never heard any of these cats talk. I put his food outside (we take it in at night to avoid feeding the raccoons), and he ate while I let the ducks, chickens, and turkeys out. Throughout the day, he was staying near our house, all alone, and crying. But he was afraid of us so dart away any time we opened the door. Finally, we put the small trap out with his food in it. And, in the evening, we had a little gray kitten in the trap.

Scott spent some time getting the kitten to trust him while Anya and I got the birds into their coops. We brought him inside in a larger cage, gave him food and water, and a cat box. Anya sat next to the cage petting him (something that seemed to soothe him). By the next day, we could pick him up and hold him. He purrs when you cuddle and pet him. Anya has been taking him into the bathroom so he has a chance to explore without getting lost somewhere in the house.

Neko’s favorite toy was two feathers mounted to a string so they made a V shape and spun like a maple seed as the string was pulled through the air. With a bunch of birds around the farm, though, I didn’t think it would be a good idea to train the kittens to chase after fluttering feathers. Anya has played with the kittens with string, she’s wiggled her fingers along the glass and they bat at them, she’s made a ball for them from her old socks. But today we encountered the ultimate cat toy — the seed pods from a sycamore tree — Scott picked a few up whilst he was mowing the lawn. Wow do the kittens enjoy batting these things all over the place. But you have to be careful walking around the back patio — never know where a ball might be lurking!

We’ve been feeding a calico kitty or two — still not quite sure on that one! She wasn’t around for a few days, and voila … now there are kittens. An orange and white one, two gray ones, and a mini-calico kitty. We need to find someone who does low-cost spay/neuter so we don’t get overrun with cute fluffballs!

There’s a calico cat that’s been hanging around our property, so we started putting food out for her. Turns out there are two calico kitties. Hopefully at least one gets friendly enough to hang around and be a barn cat! 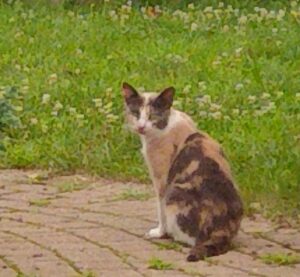 We’ve occasionally talked about going down to the SPCA and picking up one of their “barn cats“. I assume this is something that’s available at a lot of rural animal shelters — less socialized animals that you aren’t required to keep indoors. Thought a young cat that grew up around chickens would probably leave them alone (they’re fairly large and happy to defend themselves), and Anya has been really into cats since she discovered the Warrior Cat series. We see a few neighbor’s cat wandering around — a big white one, a chocolate point one — and the highlight of her day is just seeing a cat. For the last few weeks, we’ve also seen a black cat. I mentioned to Anya how some people consider them bad luck, and how the shelter I used to volunteer at had more trouble adopting them out.

Today, we were working out in the yard. The chickens were roaming around (well, the big ones anyway — the little guys tend to stay really close to the tractor when they are allowed out). Scott, Anya, and I were getting the hop arbor set up. The black cat came up out of the valley, walked toward us, and meowed. The big chickens, who had been digging around the compost, froze. The baby guys obliviously chirped and ran around the tractor. Tilly, our Columbian Wyandotte, flew/ran over toward the tractor and put herself right between the cat and the chicks. That was really cool to see — the bigger guys will actually protect the chicks. The rest of the chickens made their way toward their coop. I moved toward the chicken tractor too, and Anya went toward the cat to get him moving in a different direction. And it wanted a snuggle.

So she got to spend an hour or so petting a cat (and dragging a rope around for a cat to play with). After a big chicken got close enough to the cat for it to really appreciate the size of a chicken (and that chicken was Sunshine, our very large Buff Orpington), the cat didn’t bother the chicks. It’s an in tact male — strange combo since “in tact” usually means feral, but it’s super friendly. More friendly than any cat I’ve ever owned — my cats loved their family, but they’d hide from strangers. I left my number with the police and SPCA in case someone’s missing this guy, but the police said they get a lot of calls about cats dumped in the park (which is odd — we’ve lived here six years now, and I’ve never encountered a dumped pet … but it’s a big park). I’ve posted a pic to the usual social media places — community FB group, etc; but Anya’s hoping we’ve scored our barn cat 🙂 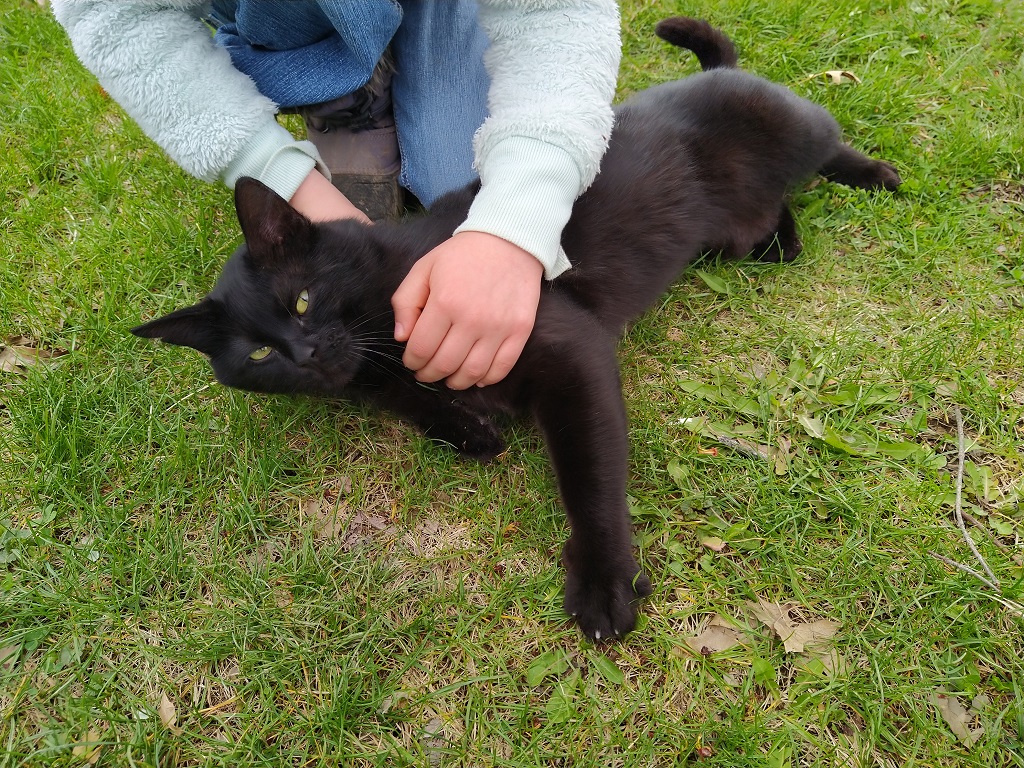