I’ve seen custard tarts topped with apple “roses” and wanted to make something similar for our Christmas dessert. Since we made our own maple syrup this year, I wanted to use a maple custard. We had a big bag of walnuts, so I used those for the crust.

Combine all ingredients in a double boiler (or a metal bowl on top of a pot). Select a medium heat (‘4’ on my cooktop). Whisking constantly, heat custard until it thickens. Remove from heat, cover with cling film, and refrigerate.

Preheat oven to 350 degrees F.
Put walnuts into a food processor and pulverize – not just powdered, some 1/8″ pieces should remain.
Measure 1.5 cups of pulverized walnuts. Combine with flour, salt, and sugar.
Melt butter. Using a fork, cut the melted butter into the dry ingredients. Add egg whites and cut together until evenly moist.
Press dough to the bottom of a pie or tart plate (can be lined with parchment – makes removing the pie a LOT easier). Cook for 15 minutes. Crust should be crunchy and brown.

The instructions used a mandolin to slice the apples, I used a spiral food slicer. Worked well. Combine orange juice, butter, and sugar in a bowl and mix. Gently stir in apple pieces so they are covered. Let sit for 10 minutes.

To assemble – spread custard into cooled pie crust. Curl apple slices around themselves to make rose shapes and gently press into custard.

We’re getting to the end of maple sap season – collecting a last batch of sap and boiling this week. We should get another gallon or so of syrup, but the red maples are well into leafing out. I’ve heard a lot of descriptions of the sap flavour after bud-break … to me, it is tannin heavy. That would put us around four gallons of syrup for the year — and re-enforce my belief that the algorithm determined tapping date is when we should tap – even if that’s the second week of January!

I was surprised to find out people think maple sap is yellow. I never really thought about it, but I happened to see “maple water” for sale at a market. Clear liquid in a clear glass bottle. The ingredients were 100% maple sap … so I knew it was clear before I’d even thought to wonder. I’ve seen sap with a slightly yellow tint. We pull the taps as the tree leaves begin to bud, so it is possible the sap yellows more throughout the year. But maple sap is clear. 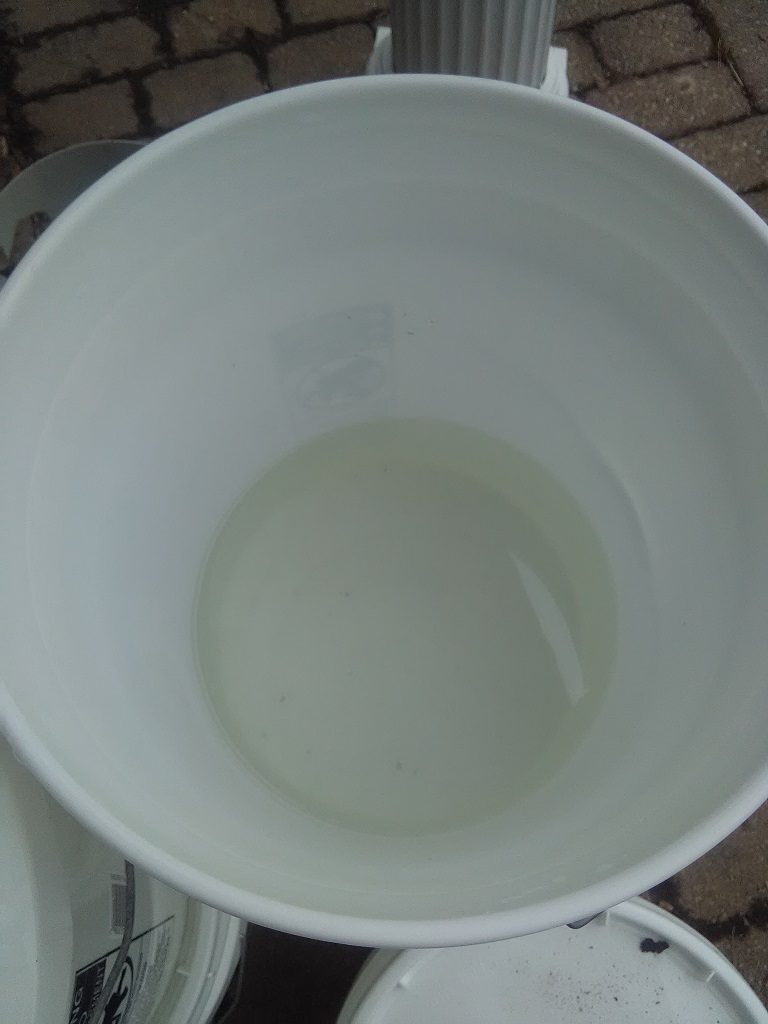 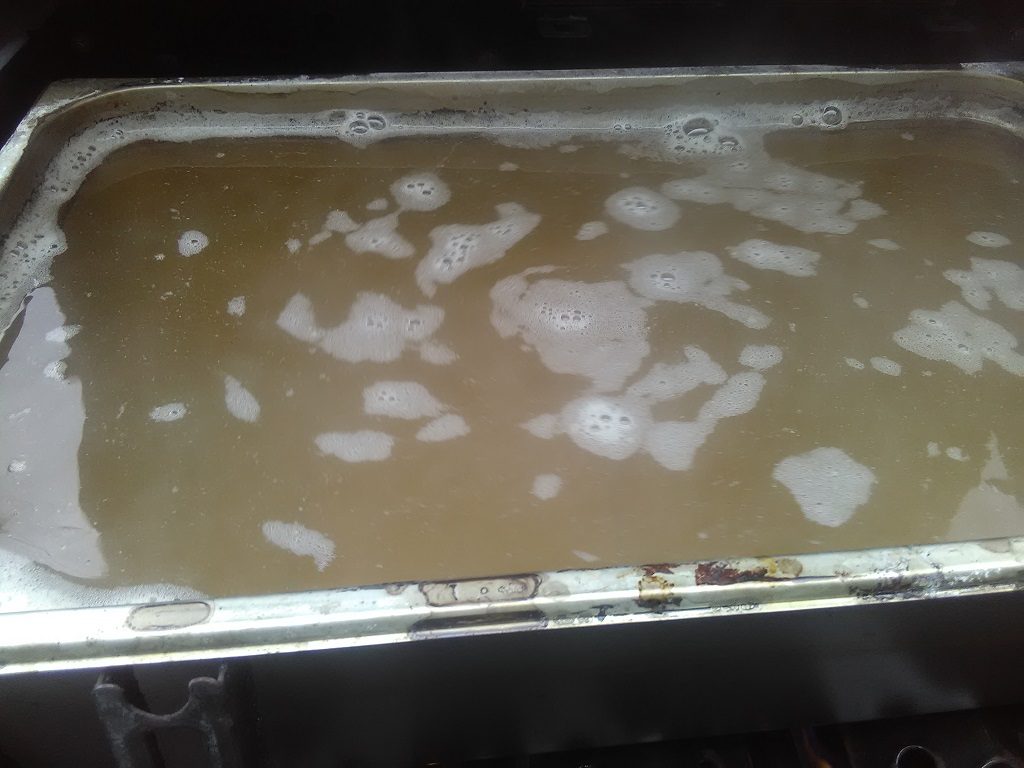 As the sap boils down, the color will get darker and the flavor will get sweeter and, well, maple-ier. 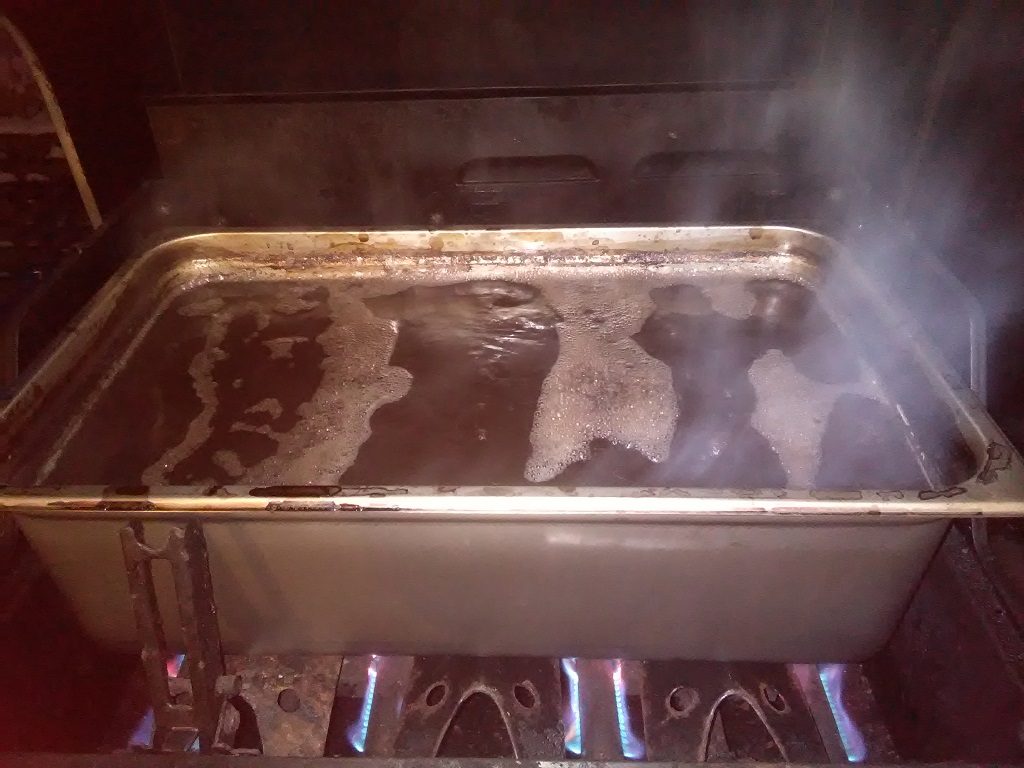 We got thirty five gallons of sap from the back woods – combined with the forty two gallons from the front and side property … we have 77 gallons of sap to boil. And more coming!

Strange day. The high here was 68 degrees, and we spent an hour playing in the sand at a beach. Not your normal February activity in these parts.

We got a LOT of sap today – and we only managed to collect the front half of the property. Thirteen trees with fifteen taps yielded thirty eight gallons of sap. Tomorrow, we’ll check the sycamore (hasn’t produced much sap to date, but here’s hoping), two hickories (same story), and ten more maple trees. Lots of boiling ahead, and it looks like it might freeze Sunday night to extend the sap run during the first part of next week.

We are about done boiling off sap from the first run — good timing, too, since it looks like we’re going to have a week or so of really warm weather (should be a good sap flow) followed by a freeze at the end of the month – extending the sugaring season into March.

We pulled the hallow ice cap from most of our buckets, so the sap started slightly concentrated. We’ve condensed about 39 gallons of sap to 2.5 gallons of not-quite-syrup. It will sit in the pan overnight to cool; tomorrow, we’ll filter it and transfer it into a pot. We will finish the syrup indoors.

We’ve finished tapping our maple trees today. We got more than half done this past weekend (fifteen trees, eighteen taps), so managed to hit the awesome tap flow at the beginning of this week. 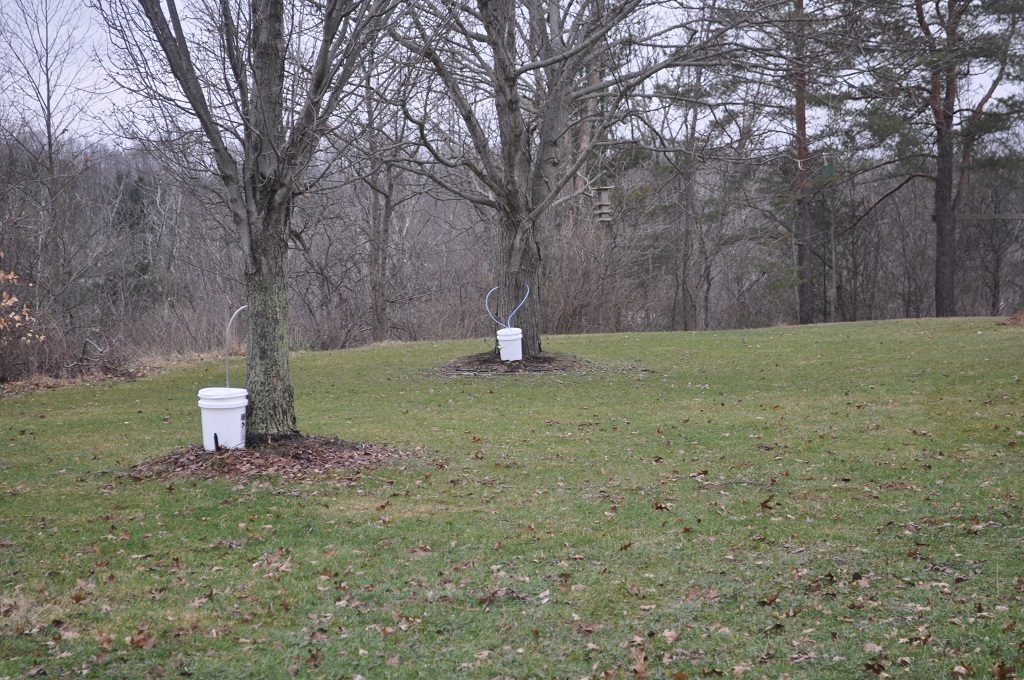 This year we are going to try tapping one sycamore tree (supposedly a butterscotch flavored syrup) and a hickory tree (no idea what that will taste like). We have twenty four maple trees tapped – a few of our biggest trees have two taps. 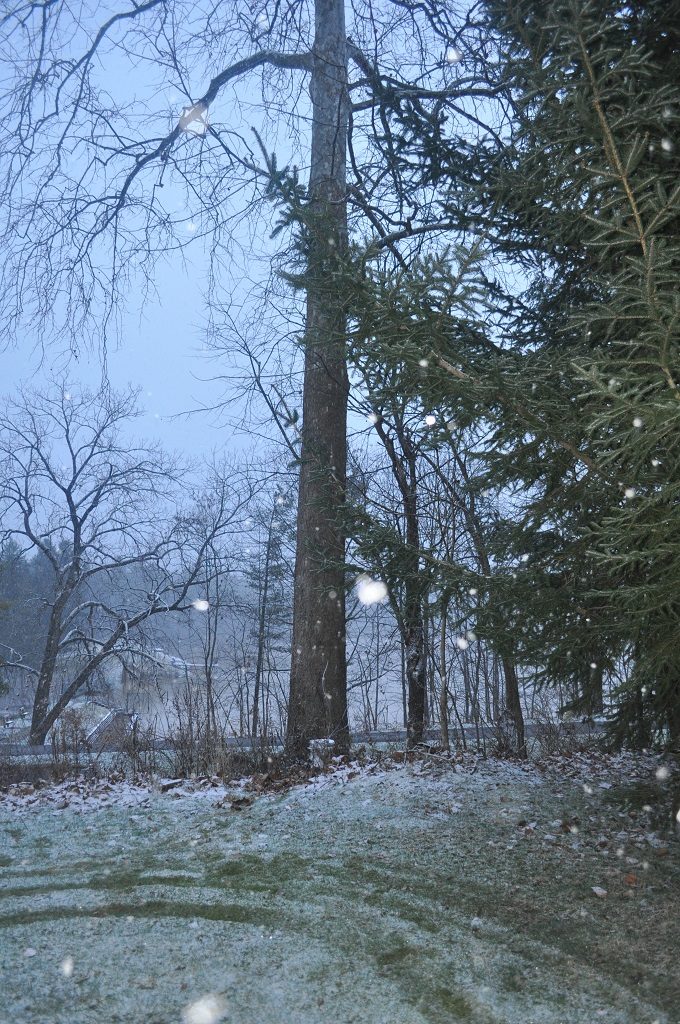 Last year was the first year that we tapped maple trees. We hadn’t identified the trees ahead of time, so we didn’t know if we had sugar maples, red maples, not.a.maple trees. We got about forty gallons of sap and used it to brew a dark maple beer.

Early autumn 2016, we took a couple cans of spray-paint, hiked the property looking for trees, and marked the trees with a small spot of paint at the base on the West side of the tree. White paint indicates a sugar maple, red paint indicates a red maple. The hickory trees are shag barks, so fairly easy to identify without leaves. The sycamore is in a unique location along the lake side of our property.

I don’t know if the “tree saver” 5/16″ taps are actually better for the trees, but that’s what we decided to use. As a non-commercial venture, potential reduction in production quantity isn’t detrimental … and I cannot see how they would be worse for the trees than the larger 7/16″ taps.

All of the equipment is stashed in a dump cart. When the ground was frozen, we took our Raven out into the woods. Now that the ground is thawed, we pull the cart by hand. We bought food grade five gallon buckets and lids from Lowes. There are a lot of types of spiles – I wanted stainless steel that we could re-use each year, and I wanted to use tubes instead of buying super expensive hang-on-the-tree buckets. There were still two different types – a straight tap and one that makes a 90 degree angle. It is a lot easier to put the tube on the 90 degree angle ones before inserting into the tree, and they look like they are going to be easier to remove.

In addition to these items, we use a battery powered drill with a 5/16″ bit, a small hammer for tapping spiles into trees, a rubber mallet for getting the lids onto the buckets, a little plastic tape measure to check tree size, and a little tool for pulling the lids off of buckets – I could NEVER get lids off plastic buckets, and this tool has turned it into a couple of second task.

With our cart full of tapping gear, we head out into the woods. Grab one bucket and lid, some tube, a spile, and the hammers. You are supposed to drill about three feet up on the tree, but stay at least six inches away from old tap holes. Conventional wisdom is to tap the south side of the tree as that side has sun exposure and will be warmer. I want to log our production per tree from the south side and north side to determine if there is any validity to the practice, but it would be a long-term study of overall production across multiple years to control for weather variations.

Once a hole is drilled, the tap is inserted and the tube pushed onto the tap. The other end of the tube is inserted into the bucket. On level ground, we just leave the bucket sitting next to the tree. In other cases, we use ratcheting straps around the tree and hang the bucket from one of the strap hooks.

We should begin boiling our sap tomorrow – yesterday was an awesome day for sap flow, and we had a lot of 1/2 to 2/3 filled buckets. It’s going to be below freezing for about 36 hours, so figured we could leave the buckets out overnight and begin collecting them tomorrow.

Lessons learned so far: (1) Buy your equipment in the off season. I bought stainless steel taps for under 1$ each, but we needed more taps that I’d purchased. They’re 2.50$ each! (2) Get more storage vessels than you think you need — we have twenty six 5 gallon buckets out in the woods and are scrounging around to find storage containers for collected sap. (3) Collect sap often. Twenty six full five gallon buckets is 130 gallons of sap! If each bucket was emptied when it had two gallons, that’s 52 gallons of sap that gets boiled down to just over a gallon of maple syrup … two or three times, but still it is easier to find a place to store 50 gallons of sap and a couple gallons of maple syrup than it is to find holding containers for 130 gallons of sap.