I’ve seen a lot of info on the incredible (bad) environmental impact of meat production — the amount of land and water it takes to grow a cow is staggering. Something like 77% of the world’s land that is used for agriculture is used to graze livestock. Lamb/mutton, beef, and cheese (mostly cows still) top the list of inefficient ways to produce a gram of protein. I see plant-based fake meat (Beyond, Impossible, etc) marketing toward this — a lower impact way to enjoy a burger. I’d like to see more focus on using existing food sources to reduce the amount of meat contained in meals — rewriting recipes to reduce meat consumption.

I make a lot of meals where meat is a small component of the dish — additions instead of subtractions from the normal recipe. Enhancements instead of restrictions. Turkey burgers with lots of spinach, some feta, and garlic. Stroganoff with three different types of mushrooms, plenty of onions, and a bit of beef. Tacos and wraps loaded with rice, beans, tomatoes, onions, avocado, cheese, grilled corn, and a little grilled chicken. Sloppy joe sandwiches where half of the ground beef is replaced with red lentils. Pasta salad that’s more salad than pasta with a little bit of diced pepperoni. We have completely vegetarian meals, and I use the Beyond/Impossible substitutes to make meatball subs or sausage pizza. That all balances out the grilled steak or rack of ribs some other day.

I have a bunch of recipes from https://foragerchef.com that I wanted to make this year … but we seem to have missed the harvest this year. Reminder for next year — snip a bunch of the citrus-y spruce tips and make spruce tip syrup and spruce tip ice cream.

I’ve been experimenting with whole wheat flour — white wheat, not red — and have happened across a technique for making light, fluffy dough. ~4 cups of flour, ~1 Tbsp yeast, ~1/2 cup of wheat gluten, ~1 tsp salt, ~1/4 c oil, ~1/4 c honey, and 2 Tbsp of lemon juice. Supposedly the healthy stuff in the whole wheat makes it difficult for gluten to form the long, stretchy chains that make bread light and bubbly. Lemon juice helps the gluten, and the resulting bread is less dense than a traditional whole wheat bread. I add enough water to make a soft dough, then leave the dough rise in a warm location (the house this time of year, or the oven with the light on). Gently deflate, form (either form a loaf or spread out a pizza crust), let rise again. Then bake however long that sort of loaf needs to bake. Using my pullman loaf pan, that’s 30-35 minutes. 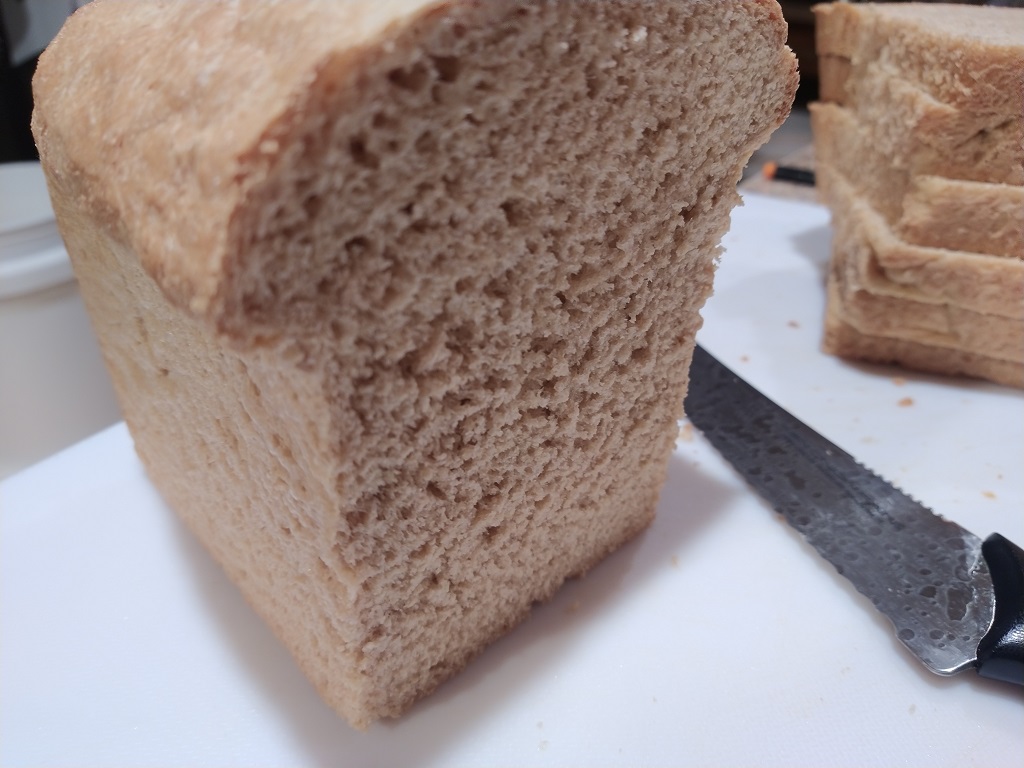 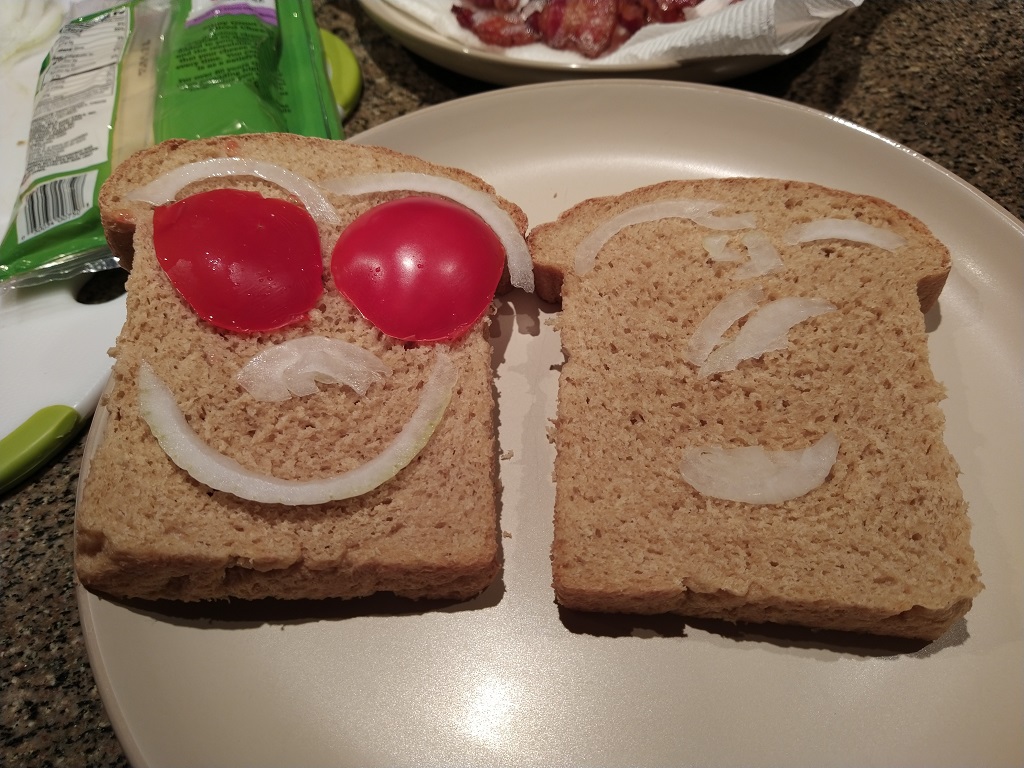 We’d made ribs a few weeks ago using my usual pressure cooking-followed by high temp cooking to caramelize the sauce approach. While that works well in an oven — where the falling-apart-tender ribs sit safely in a baking dish — it’s not great for grilling. Scott wondered how cooking some ribs just on the grill would work out. I spent some time researching how people make bbq ribs on gas or electric grills and came up with a cooking approach that sounded reasonable — low temp, long cook, and wrapped in aluminum so they don’t dry out.

After washing the ribs and removing the silver skin, I rubbed them with a blend of salt, paprika, chipotle pepper, black pepper, cayenne pepper, thyme, and garlic. I put the grill’s temperature sensor into a thick, meaty section and wrapped them in aluminum foil. The grill was heated to 300° F. The ribs cooked for about 90 minutes — the internal temperature was 180° F, which was in the range the cooking technique indicated. I took them inside and carefully unwrapped the foil. 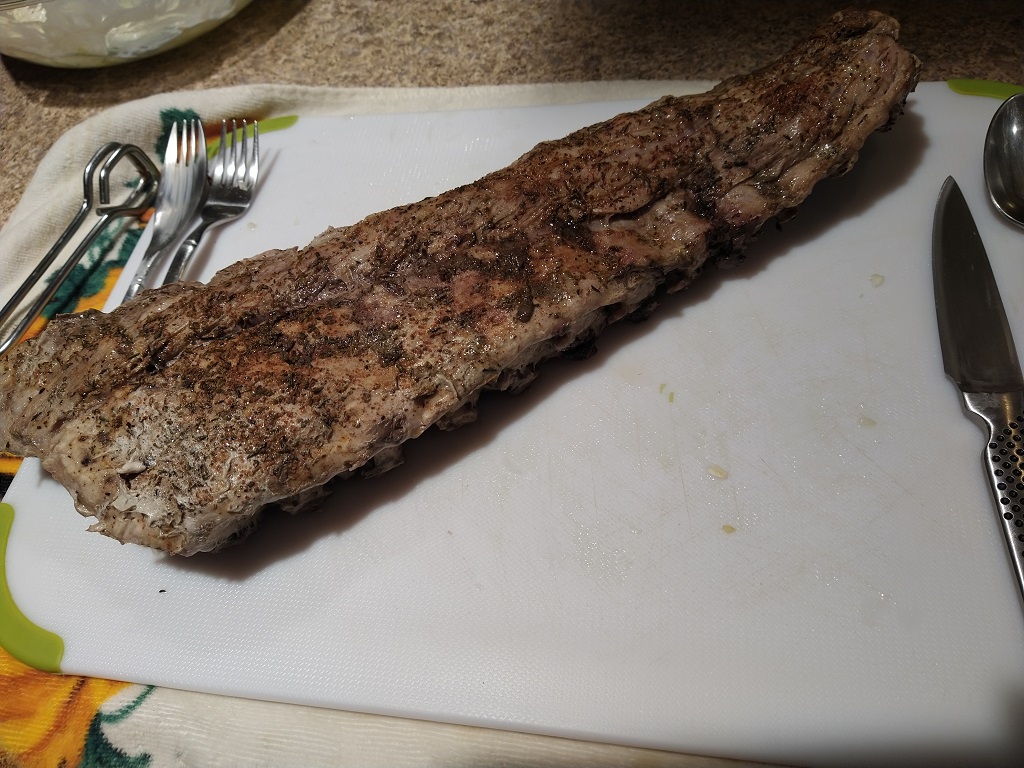 I cut the rack in half because we had two different sauces we wanted to try. The larger half was liberally brushed with Guy Fieri Apple BBQ sauce, and the smaller half was brushed with the Brown Sugar version from the same company. The apple one smelled like some hand soap that had come with the house — not like actual apple, but like apple fragrance oil. I read and re-read the ingredients trying to figure out what the smell was, but didn’t find any artificial flavors listed. 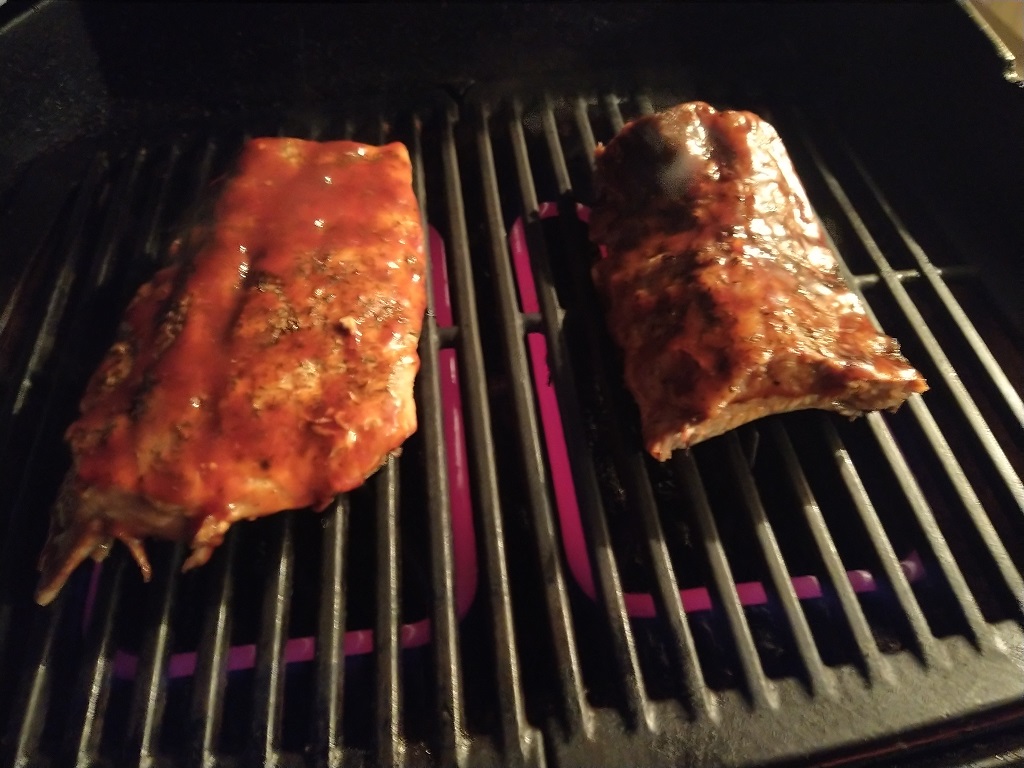 I then brushed more sauce over the ribs, flipped them, and cooked them for five more minutes. 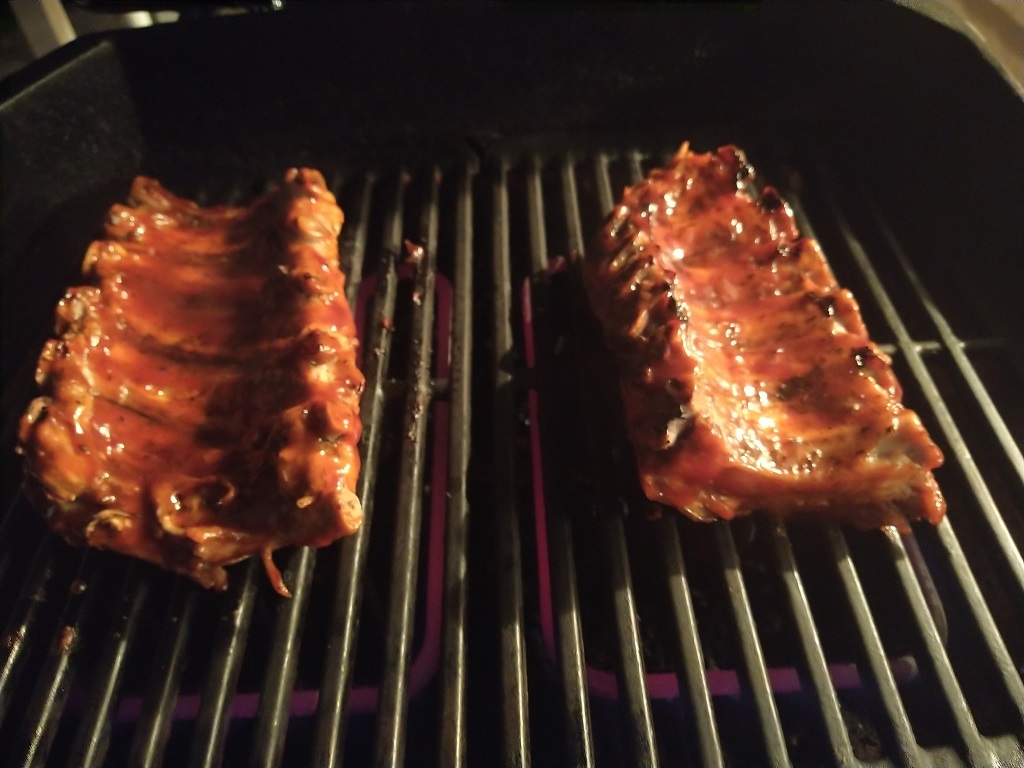 I flipped them and allowed them to cook for another minute because the sauce on the side facing up hadn’t caramelized. 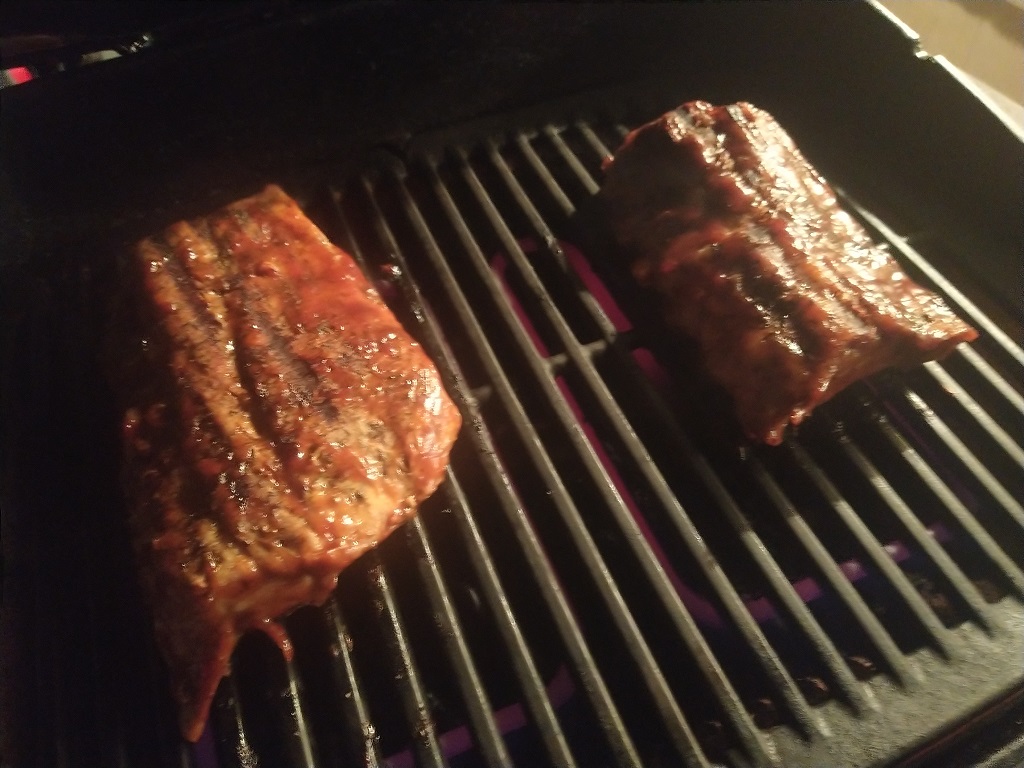 I brought the ribs inside and let them rest for a bit while everyone got ready for dinner. 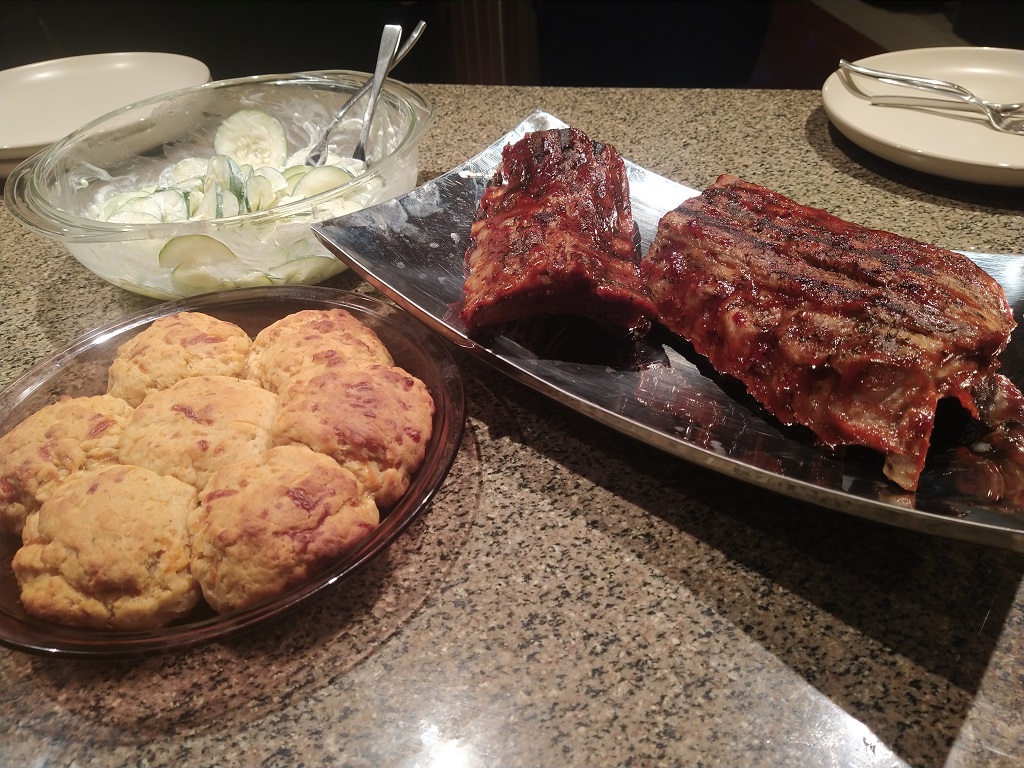 Scott sliced the ribs, and dinner was ready. The BBQ sauce wasn’t great — the sauces were quite vinegar-y too. The ribs weren’t falling apart like the double-cooked ones we made a few weeks ago, but it could have used a little more time on the grill to get more tender and fully render the fat. But it was a nice meal (and an interesting experiment). 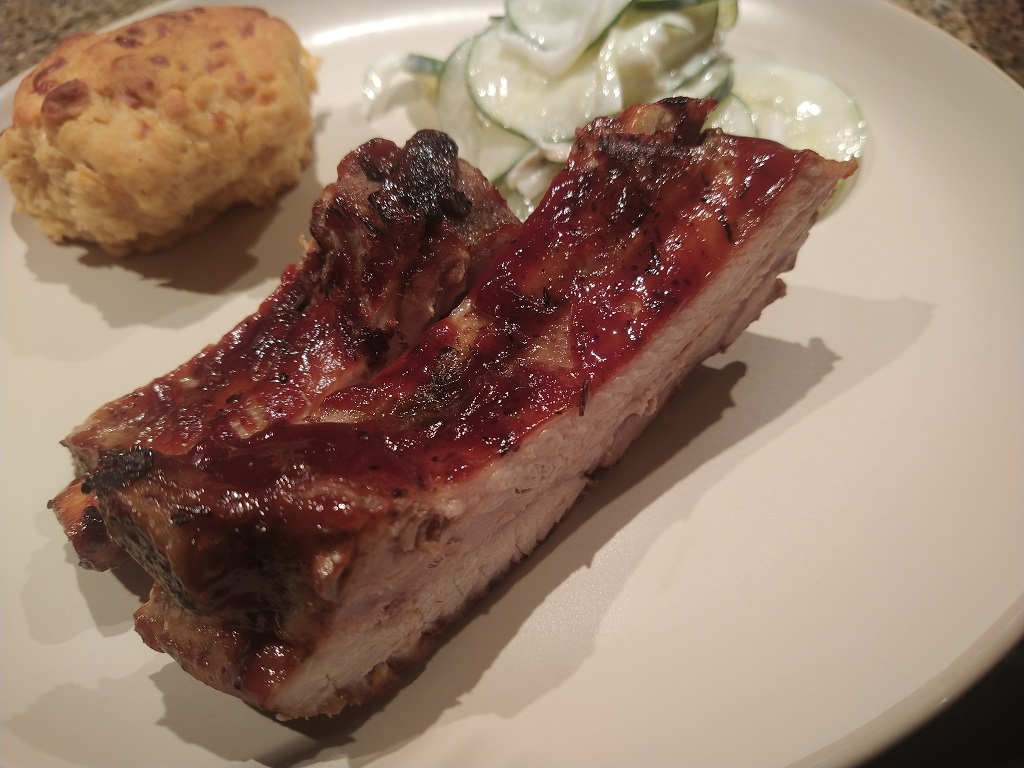 All mixed together with an additional tablespoon of an Italian herb blend. Allow to rest for at least an hour. Split into eight balls, then roll into flatbreads about 1/4″ thick. Cook at a medium high temp for a minute or two on each side.

Grilled pears with cream cheese — a maple syrup drizzle sounded really good, but it didn’t go well with the pears and cream cheese. 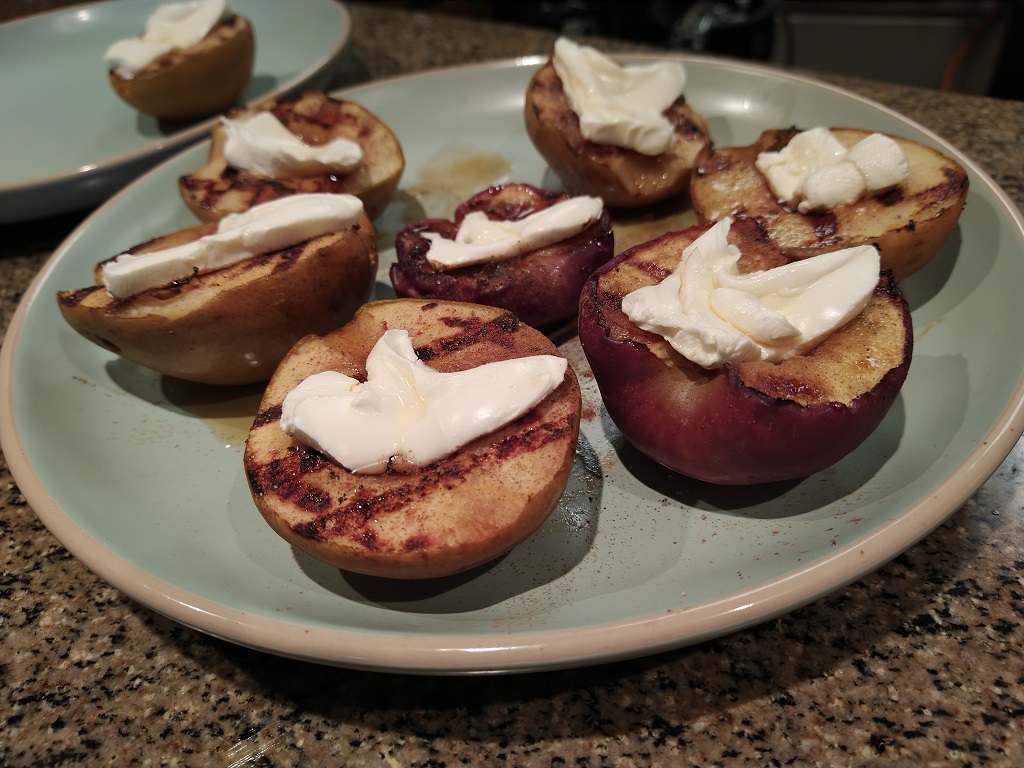 Mix into the egg yolks:

Sprinkle with a little salt and smoked paprika to serve.

17 April 2021: I made these again without the maple syrup — Anya was bummed not to get sugared up at lunch, and they were really salty this time. I used a different mustard! Next time, I’ll make them un-salted and add the salt “to taste” at the end (or, more likely add the salt to Scott’s taste since I am quickly overwhelmed by salt). 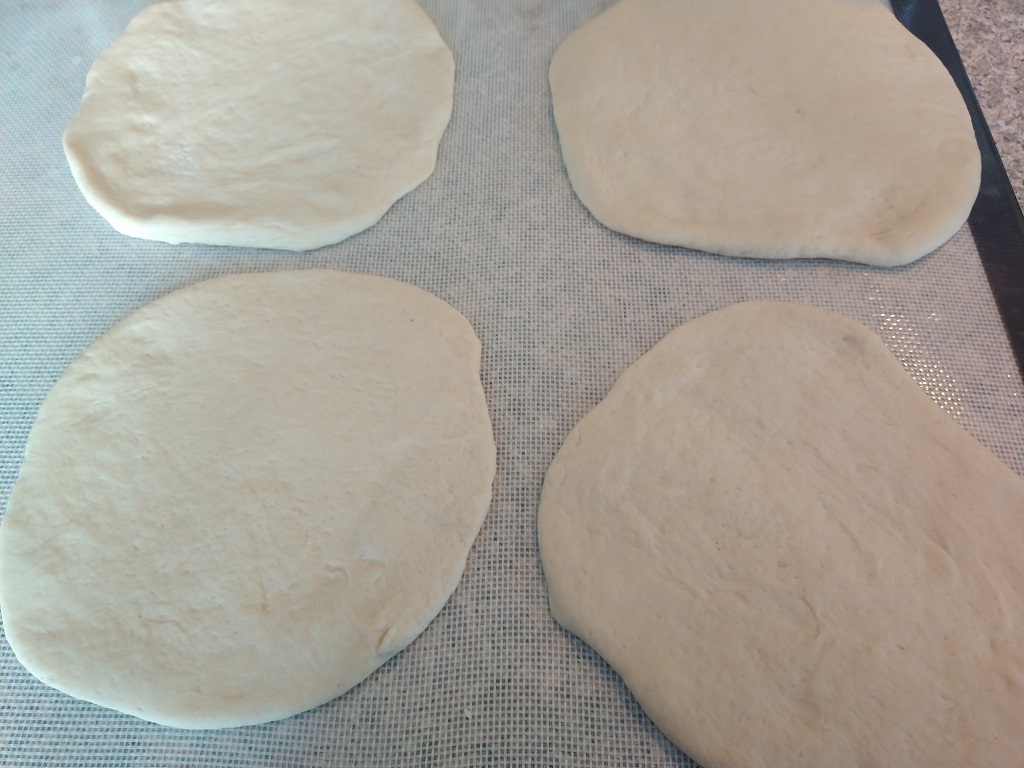 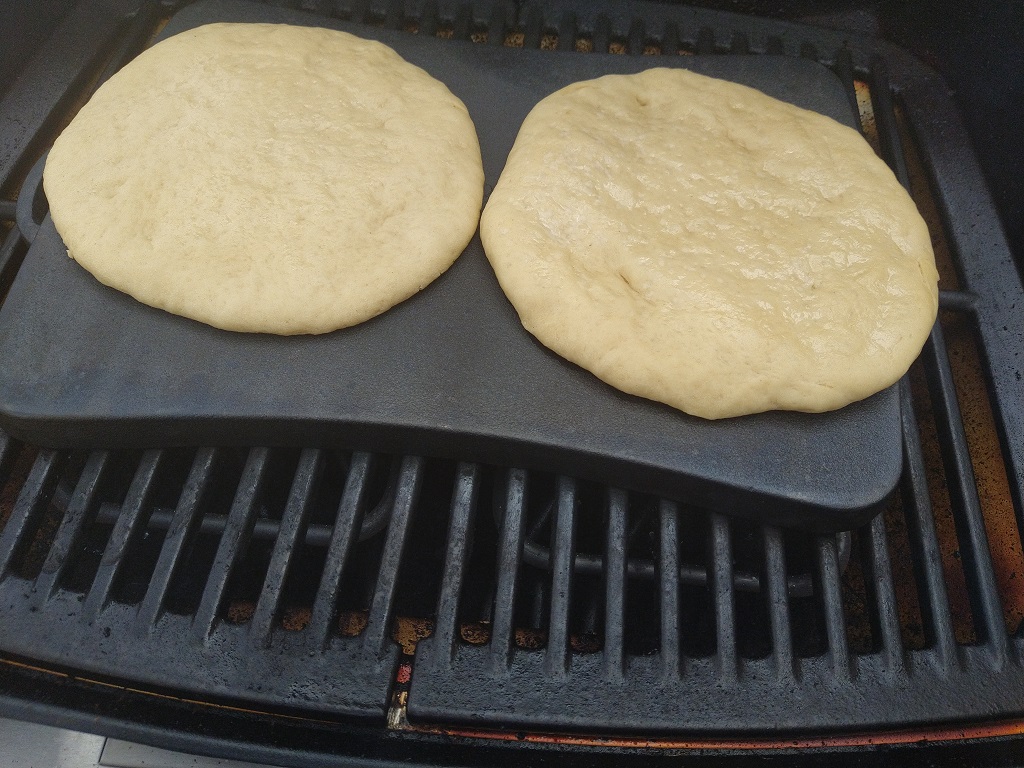 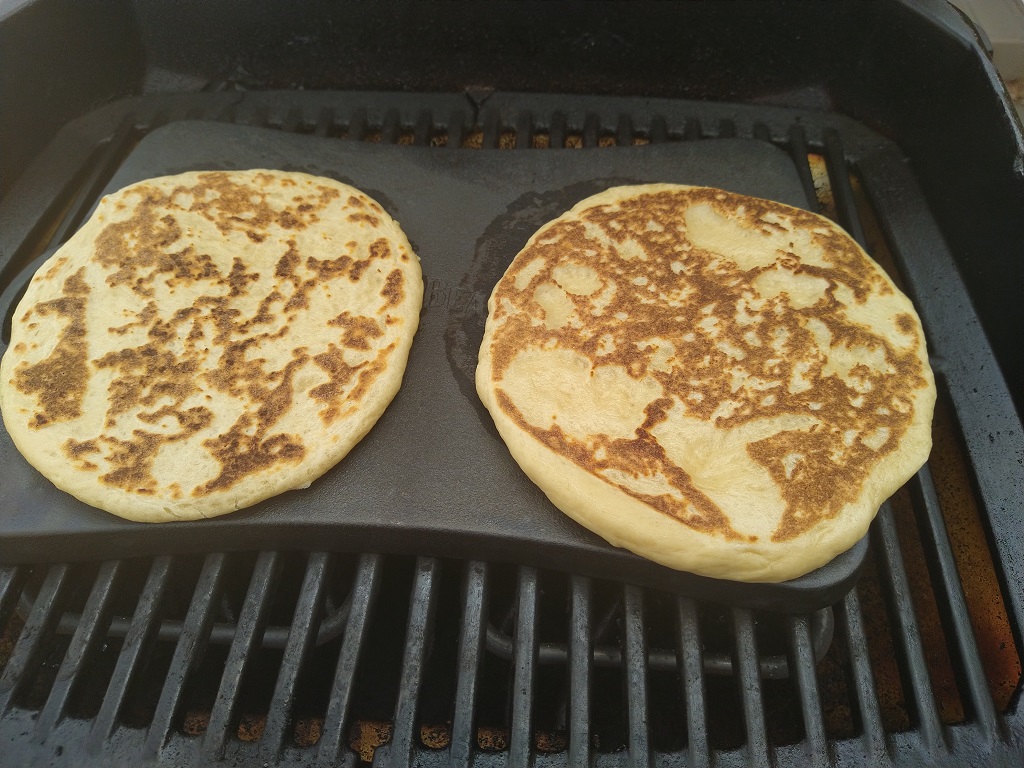 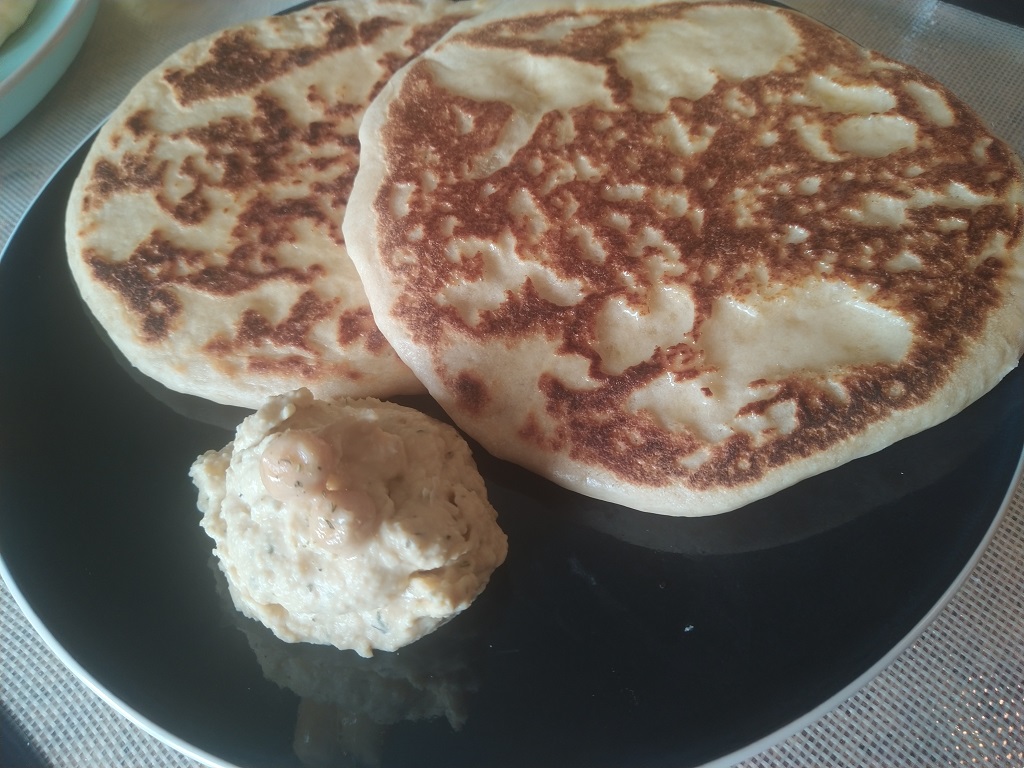 I tried making another stuffed crust pizza. I rolled the crust out into a rectangle a few inches larger than the pan. We had picked up a block of mozzarella that’s not the soft, watery fresh mozzarella. We cut it into rectangular prism and lined the inside of the pan rim with cheese. This worked a lot better than shredded cheese. I then folded the excess crust over the cheese and pressed the edge together to seal it up. 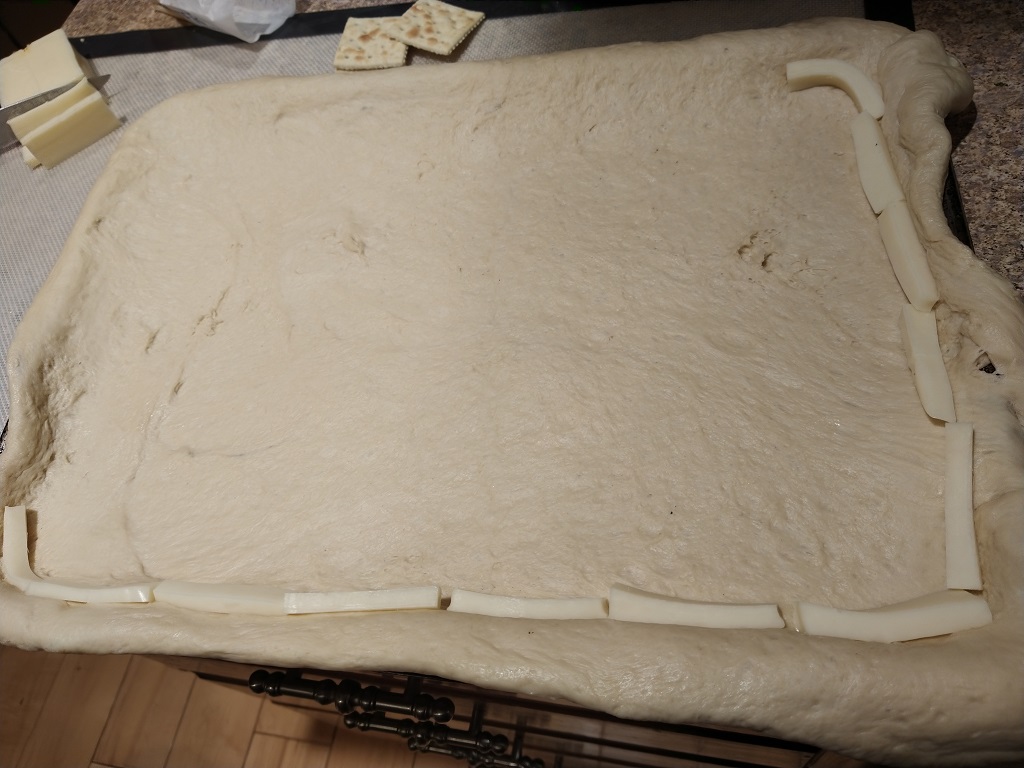 Topped with tomato sauce, cheese, and way too much pepperoni. Baked at 550F for about 14 minutes 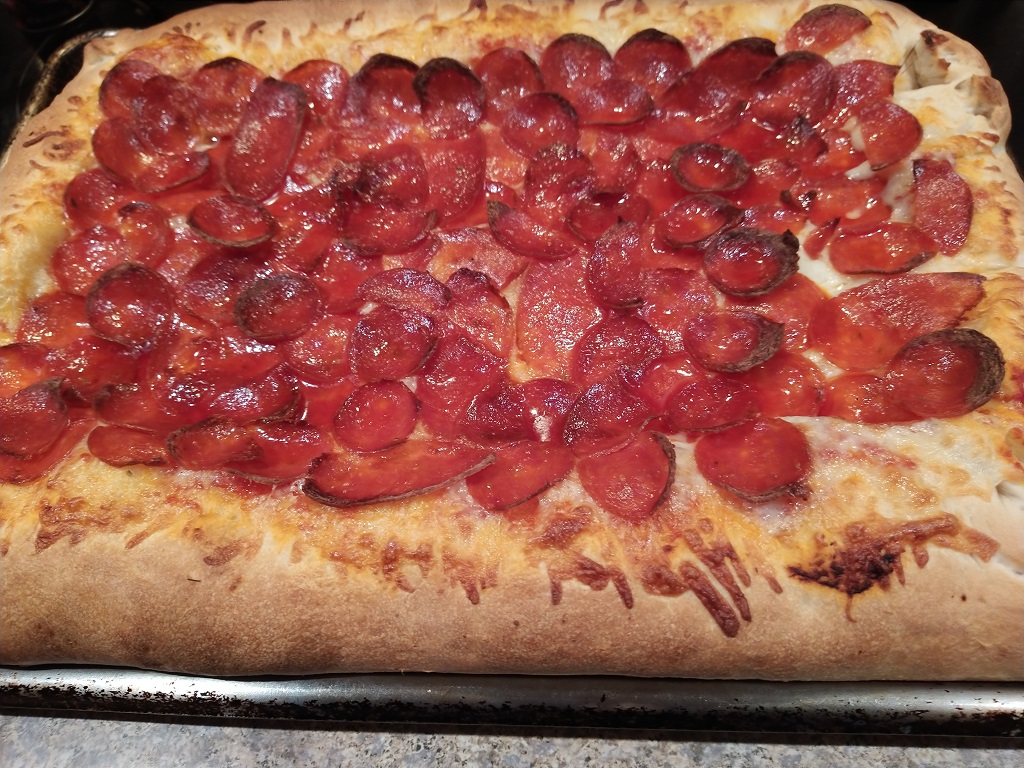 The crust was cheesy, but it was still too much bread. I’m thinking the crust would be rolled out to the pan size and then cut laterally with a bread lame. Then the crust wouldn’t be doubly thick. 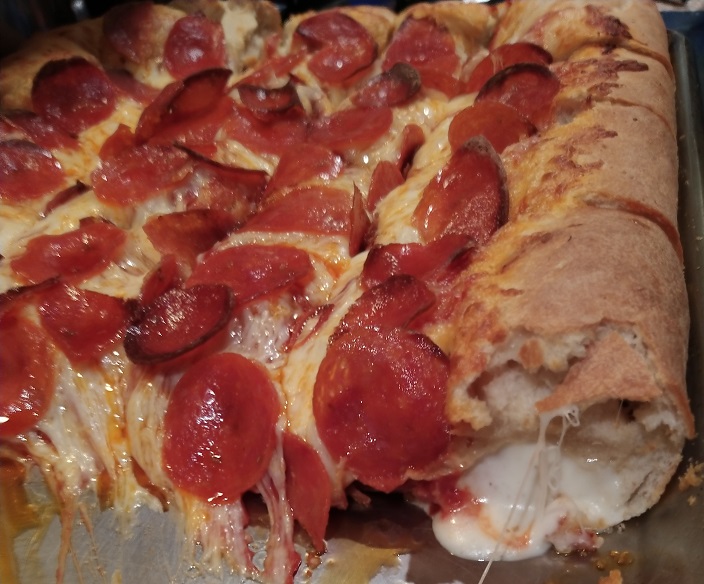 But I’ve also thought it would make sense to add sauce to the cheese inside the crust. But … that’s kind of silly. It’s a pizza roll surrounding a pizza. A lot of effort without any real benefit. Pizza is cheesy and doughy already. I think that’s the end of the stuffed crust experiment. But, if we do it one more time, I’m trying the lame.