We stopped by CAM International Market on Saturday to see if they’ve got bat nuts, find fruit I don’t find at the local supermarket, and pick up a few expensive-elsewhere items (sesame oil!). Scott spotted a large, pokey looking fruit and asked if we should get one of those. Durian, the sign said … and I had to stop for a second because I don’t think I’ve had those before. And then I remembered where I’d heard the name … 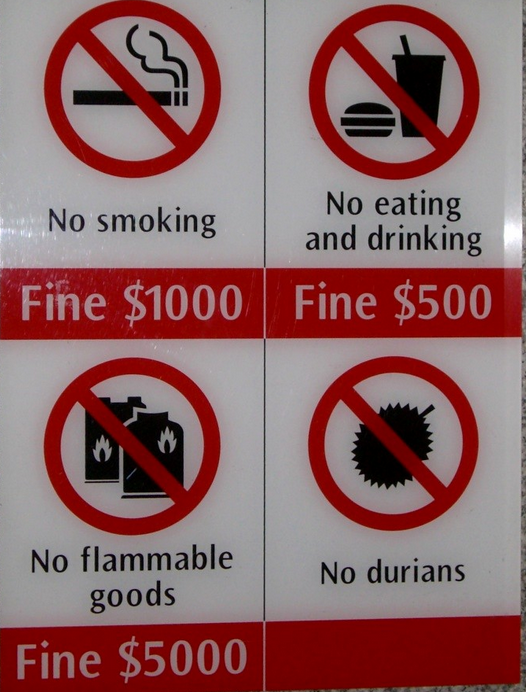 The Singapore subway banned them because the odor was so offensive. And some people loved the things. We did not get the big durian fruit. Or the smaller vacuum sealed pack of durian flesh. He spotted durian-stuff a few more times and kept asking if we should try that. Finally, we happened across some mochi balls with durian ice cream. If you’re going to eat something with a stench awful enough that a subway system would bother banning it … a bit of it in ice cream is probably the way to go, so yeah … we’ll try it. There were four balls, just enough for each of us to have one.

I diced up a few persimmons — something that I knew was sweet and tasty — as a chaser. One ball out of the package in a bowl, and it smelled floral with a hint of not-so-good onions to me. But my nose doesn’t pick up a lot of chemicals and I figured, honestly, I’d be among those who don’t notice the smell. Scott tried a bite. He gave Anya a bite (and why didn’t we think to record this? She make an incredible YUCK face before and after trying it). I tried a bite. It was not good. The flavor was very onion-y with a sweetness like caramelized onions. But onion and ice cream isn’t really something that goes together in my mind. Maybe durian with roasted pork, but dessert? Nope. And then the half-a-ball sat in its dish. It got stinkier as it warmed up. Until it was voted off the island and into the city sewers (sorry gators!).

None of this prepared me for the horror of durian burps. A terrible combination of sewage and onions coming back to haunt me. Or sitting next to someone with a durian burp and thinking the stench has somehow lodged itself in my nasal passages. It was a good twelve hours before I wasn’t experiencing durian again.

Which makes me wonder … What in the world does a durian plantation smell like? I have fond memories of driving along the Nile at sunset and smelling sugar cane on the air. Even if the smell is significantly reduced in the whole fruit, a whole plantation of the things baking in the sun?!? And what does this stuff smell like if it’s gone bad? Does it rot and smell better? Or is it sewage and gym socks without the floral undertone?

But it was an entertaining experience. We’ve all had our lifetime supply of durian. And there are still three of these things in the freezer 🙂

Add a tablespoon of salt for each cup of water. Stir and let sit for a few hours (or overnight).

Preheat oven to 400 degrees F.  Boil seeds in the saltwater for ten minutes, then spread across a baking tray.

Bake for 15 minutes, stir to flip seeds over, and make for 5-10 more minutes.

Bring to high pressure and cook for 20 minutes. Remove from heat and allow to release pressure naturally.

To serve – shred an apple, mix into hot groats. Add a teaspoon or two of brown sugar and sprinkle with cinnamon. Add 1/2 cup of almond milk.

This recipe is a version of the Dijon carrot salad I ate during trips to Lyon and Geneva. It’s got a lot of Dijon, so you might want to start with half the amount and taste as you add more.

Anya wants to eat pepperoni pizza, but without the meat. I’ve seen a few vegan pepperoni products for sale, but they all look quite unappetizing, they include all sorts of crazy ingredients, and they’re super expensive. So I set out to find a veggie pepperoni recipe online. Took a lot of searching, but I found a recipe that looked promising. I made it with half the lowest amount of red pepper flakes. It was so hot, the stuff was inedible. Great taste, but a total waste. Also, the recipe didn’t indicate what type of extra-firm tofu to use. I happened to have some of the not silken sort, so I used that. So we had an oddly textured burning hot pepperoni (and I had to add a good bit of liquid to form anything even approaching a paste). I’ve been wanting to make it again without the pepper flakes and try silk tofu instead.

I tried it again tonight, modifying the recipe

Preheat the oven to 400 degrees F.

In a stone mortar, crush the garlic cloves. Add the sea salt, peppercorns, mustard seeds, one half teaspoon of fennel seeds, and anise seeds. Grind to form a powder. Add sugar and smoked paprika, and blend together.

In a food processor, blend the tofu until it is creamy. Add the spice mixture, one tablespoon at a time, and blend until combined. Once it has enough flavour for you, store the remaining spice mixture (I used about half of the spice blend).

Spread the tofu on a lined baking sheet. You can spread separate little sections, cut it like the linked recipe, or just make one big chunk that you break up before using. Either way, bake for 10-15 minutes. Mmmmm! This tastes good, the texture is great … we made vegetarian pepperoni!!!

Preheat the oven to 450 degrees F.

Melt butter and combine with buttermilk. Mash garlic cloves and mix into milk/butter.

Add buttermilk and stir until moistened. 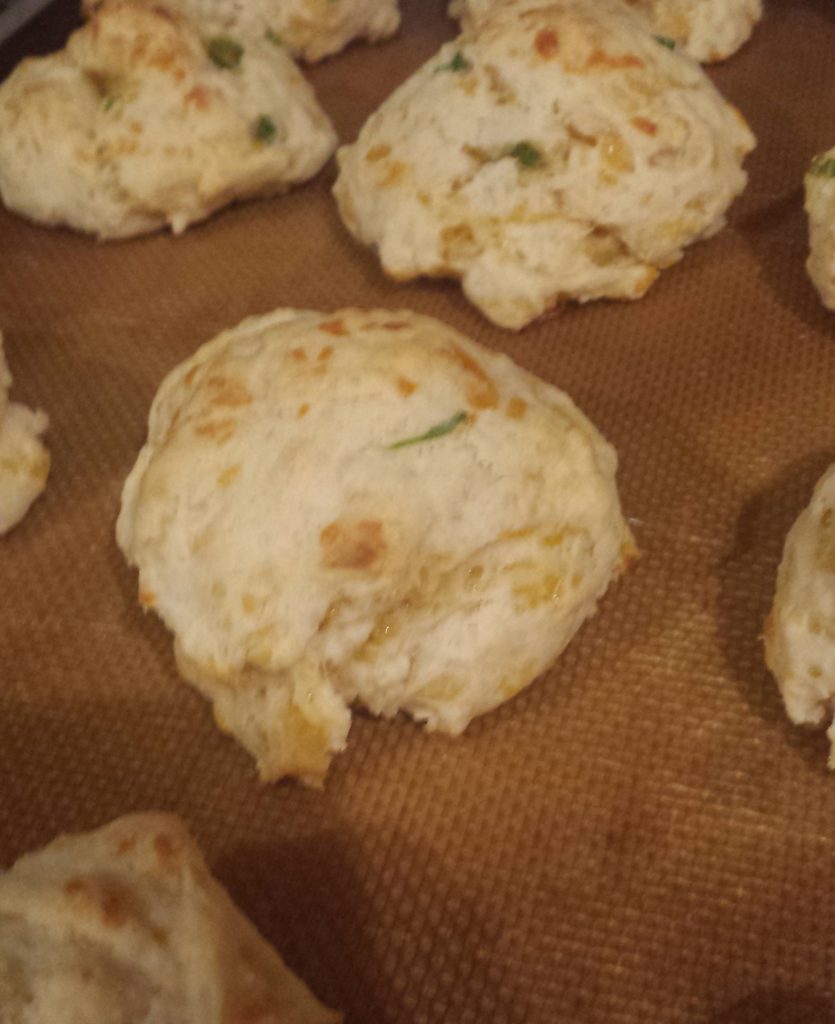