Watching the recordings of Barr’s testimony to the January 6th Select Committee I couldn’t help but think “Barr is an attorney” — I’d encountered him as the General Counsel of the company when I worked at GTE. I knew him as our attorney that led an effort to deregulate the telephone industry — but a bit of research let me to understand he was also an attorney who has been involved in a major political deal-e-o before (the Iran-Contras affair).

So when I hear Barr saying Trump was ‘detached from reality’ and that his election conspiracy theory was “silly” and “nonsense” … I hear someone setting up a defense strategy for Trump: the Tucker Carlson defense — no reasonable person would have believed these statements to be true. “I didn’t know  wasn’t true” is not considered a valid defense when you’ve been told by dozens of well-informed people — willful ignorance doesn’t remove culpability. Now, I don’t know that Trump will open the door Barr constructed. Detached from reality isn’t a good slogan for campaigning. And going the Carlson route would mean admitting not only that he lost in a completely fair election but also that he continued to bilk his supporters for millions of dollars by promoting his claim to the contrary.

We have reached a point where Dick Cheney is making an appearance on the House floor to support his daughter in her belief that attempting a coup is, well, not the pinnacle of American democracy?!?

For a long time, I absolutely believed both parties in the United States thought they were trying to do the right thing for the country. I remember going to a rally against privatizing social security — one of Bush 2’s early initiatives. The local NPR station had a reporter meandering around looking for younger people to interview — looking, specifically, for people who were worried that their retirement wouldn’t include social security. I, on the other hand, knew the history of the social security system. It was started after people lost huge sums of money — some more money than they had (thanks, leveraged buying) in a stock market downturn. The basis of social security is, essentially, that you can realize greater returns in riskier investments. But you can also lose everything in riskier investments, and this program is the backstop against “losing everything”. In that context, how is it reasonable to consider allowing individuals to direct social security funds into riskier investments because they might be able to outperform government bonds?!? But … I got it. We were decades away from the great depression, and years before the crash of 2008/2009. Most people had only experienced upward movement in the market. And the question at hand was really “is this form of insurance against stock market crashes still worth it?”. I could look at pretty much any political debate and understand how both sides had a coherent argument and viewed their position as The Right Thing To Do.

Maybe that’s still true today — but it seems like conservatives have become more adamant about forcing their will on the nation to retain power. To make money. We watched a dude on MSNBC basically admit to participating in a coup attempt not because he was ashamed of his actions. Not because he wanted to make sure everyone understood what exactly happened. But because he wanted to sell his new book. Well, mission accomplished (I guess). He’s managed to get his name out there & we all know he’s got a book. Liberals can buy it to prove there was a coup and conservatives can buy it to see “the receipts” on stealing an election. (Receipts which have been promised on multiple occasions but which have never been produced).

I’m still hopeful that the end result of this mess is a viable third (fourth, or even fifth) party. Maybe some actual fiscal conservatives (not deficit spending dumped into the military industrial complex v/s tax for domestic spending). Some democratic socialist party that makes Bernie seem pretty middle-of-the-road.

They’re selling MAGA civil war shirts … I’ve got a bad feeling this is going to be ugly. 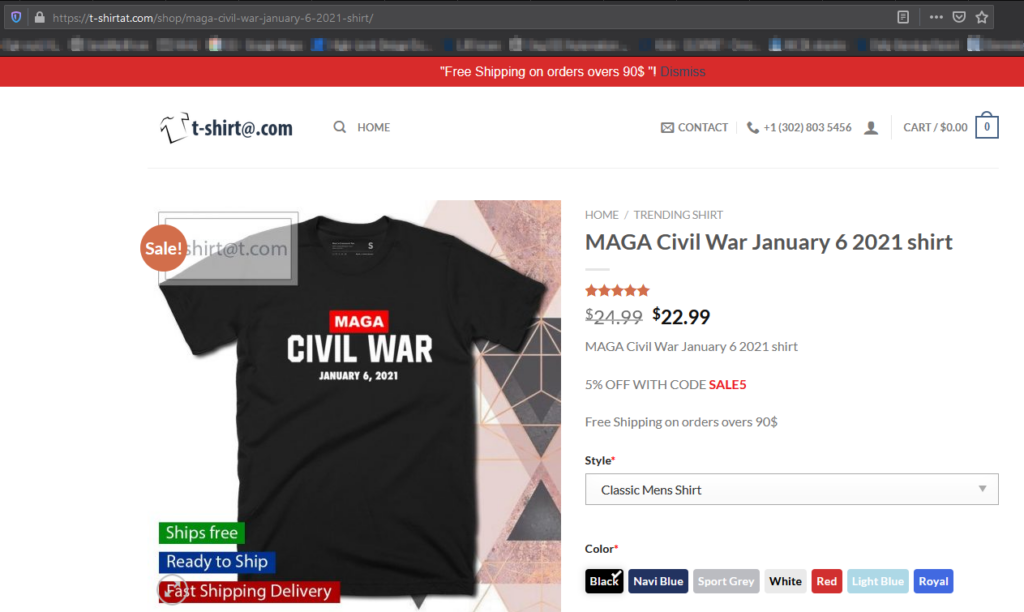 Friends have been discussing a Cosmo article that views secession talk from the perspective of a liberal Southerner. I, for about a decade, was a liberal Southern. A vegetarian in a barbecue capital. I can’t say the article changed my mind. It seems to presume there’s a *good* solution. The existence of a good solution is often over-simplification or an idealization of the situation. I laud the people in Texas protecting others who simply want to use their rights. I feel awful for the people who live in a state that doesn’t care about the environment, loathes redistribution of wealth, think we’re wasting our money educating citizens. If the options were “everybody stop doing that” or “keep doing it but some states secede”, I would be on board with ending the secession talk. But that’s not reality. As it stands, the whole country suffers because of a minority’s opinion about what’s right and wrong. The choices are “stick together and keep doing it” and “split up; some of us, based on where we live, can stop doing it”.

It’s easy enough to say “step one is to reorganize yourselves based on political beliefs”. Doesn’t work well in practice. There aren’t a lot of people who can just move. They need to find a job, a place to live, pay to have their stuff moved (or buy new stuff). They may need to find childcare. Or a medical specialist. There are minors who don’t gt a choice in where they live regardless of their personal beliefs.
The only reason I see to stop talking about secession is that I don’t see it as logistically possible. I remember being intrigued by Lesotho — it’s a country completely surrounded by South Africa. How exactly does a country end up in the middle of a whole other country?! I knew the history behind the Vatican City State … kind of accepted that as normal because (1) I’d encountered it at an early enough age that I didn’t really question it (2) you could literally walk from Italy into Vatican City — no customs, no passports — so it didn’t seem like a different country, and (3) it’s so small {and this is before “online” was a place to see maps, thus ‘zoom’ didn’t exist} that you only saw it if you were looking at a street map of Rome. Lesotho? It’s large enough to see on a map of Africa. Secession seems like it would produce a *lot* of Lesotho’s — Memphis, Austin, Asheville, New Orleans. I want to focus on a viable solution to eliminate the oversized influence low population-density states have in the Federal government. Undo the gerrymandering that exacerbates this over-representation.
I’ve seen talk of secession since SCOTUS reused to hear Texas v Pennsylvania et al. I’ve also heard liberals wish them a fond fairwell. Unlike the Civil War era were the nascent industrialized North had financial need for the agricultural production of the South … it’s a different financial picture today. Unfortunately, the net balance of payments to/from the federal government gets cited as a depiction of this economic reality. Deficit spending means *most* states get back more than they pay in — there were less than a dozen states with a negative balance of payment, and the federal outlay in Virginia alone exceeded the total excess intake from those states. But, yeah, I expect many liberal states would be economically viable. As would many conservative states. Liberal states that aren’t economically viable should be OK too — accepting redistribution of wealth is a tenant of liberalism. It’s the poorer conservative states that have a problem.

Of course the secessionists haven’t thought it through; they are throwing a tantrum. As a thought experiment, though, I tried to think through the creation of Trumptopia. I cannot conceptualize a fully functioning, unified nation. A common enemy is a great way to unite people. Get rid of that common enemy (so-called socialists), and I expect they’ll discover a lot of disagreement. More prosperous states won’t want to subsidize poorer states (a resentment I remember from German unification — glad to have the country reunited, but the economic hit for former West Germans really sucked). And, generalization aside, there are urban, liberal outposts like Memphis, Austin, etc. that won’t be keen on getting dragged along with the rest of the state. Unless secessionists are looking to go the route of Greek city-states, which brings its own set of challenges.
Even if Trumptopia managed to form somewhere, I expect Republicans have a libertarian/bear problem … letting industry self-regulate sounds good while we have a lot of federal regulation because we’re free to imagine industries as honest, pretend there’s enough competition for consumer choice to force acceptable behavior, and assume consumers are sufficiently well informed in their choices. Same with individual freedom — we’re making an a priori assumption that everyone else’s decision will line up with our rationalizations (see: above bears).

My prediction for Trump’s next heap of crazy (or an episode of The Trump Show that runs in my head): Trump gets some foreign state – I’m thinking Erdoğan from Turkey – to admit to perpetrating massive vote fraud. Mailing millions of ballots to some states. Hacking electronic voting platforms. All of the above. Tries to invalidate the entire election on the basis of this “totally reliable” evidence.

The problem with concrete evidence (say, a list of voters whose ballots you claim are illegal) is that someone can check it:
“When Georgia state Rep. Bee Nguyen (D) reviewed a list of voters who President Trump’s campaign claimed cast illegal ballots in the state, three names caught her eye: two friends and a constituent. “
https://www.washingtonpost.com/politics/heres-what-happened-when-a-georgia-lawmaker-scrutinized-the-trump-campaigns-list-of-allegedly-illegal-votes/2020/12/10/1400d628-3b06-11eb-bc68-96af0daae728_story.html

Democracy isn’t letting people vote then invalidating the ones you don’t like, but here we are — Texas v. Pennsylvania and its accompanying amicus briefs. Republicans are the party of states rights — unless the state does something they don’t like. But, I suppose, disqualifying the votes of people who don’t vote the way you want is the logical extension of the “real American” mantra touted by Palin. And the tea party’s “no taxation without representation” … uhh, we all voted. You have representation. “Well, they don’t represent me” logic. Having lived through many years of minority rule, I get their point. Philosophically George W Bush didn’t represent me. Trump sure as hell doesn’t represent me. But — however much we may philosophically differ, they did represent me. Because that’s how American government works.

Could we use modern technology to have direct representation? Sure. Direct representation would eliminate gerrymandering and the oversized influence of low-population-density states. It would be rather inequitable — who has the time to read through every piece of proposed legislation, get online and vote their opinion, etc. But it could happen. Even then, though … 60% of the people vote for X, that’s what we get. And the 40% who voted not-X suck it up.

Movie/story idea — All of the crazy conspiracy theories Trump parrots are actually true. The deep state looking to undermine him. The conspiracy to steal the election, twice. The QAnon idea that Democrats are secret pedophiles or cannibals or whatever looking to take over the country and Trump has been ordained by God himself to save us. Except, unlike mainstream stories where good triumphs over evil … the bad guys win and the savior lives out his life in exile.

I wonder if the lesson from Mike Bloomberg’s 2020 election investments might be “dumping money into advertisements has limited benefit”. A hundred million dollars to fund groups driving people to polls. Or free public transport rides on election day. Or groups helping people navigate voter registration (possibly including fees and transportation to where-ever non-driver photo IDs are issued). Maybe those would have been more productive ways to blow a hundred mil.