Tea and Cake: Angel food cake with lemon curd and blueberries at home around 4 PM

Dinner: Pizza at home around 6 PM

How the Internet has changed business constantly amazes me. I made a cape for Anya over the summer, and we didn’t want something tied around her neck … so I wanted to use a magnet to hold the cape closed. It gets caught in something and the cape breaks free. A single pair of magnets, at the site where I was purchasing the fabric, was 7$. I’m sure they are *REALLY* nice magnets (or, rather, at 7$ for two maybe 1″ diameter magnets they better be really nice magnets), but that price seemed somewhat outlandish.

Enter the Google search for magnet closures (most of which seem to be for purses and have a snap in the centre of them). I happened across Alibaba — where the exact same thing could be had for 2¢ per piece. With a minimum order of 1,000 units. And, yeah, 20$ is a lot more than 7$ … and I wasn’t actually sure if it was 1,000 pairs of magnets or not. But even if I only got 500 pair for 20$ … that’s 4¢ a pair for something retailing for 7$. I could sell half of them on eBay or something, have a lifetime supply of magnetic button closures, and probably have paid less than 7$. Except — I don’t really have any idea how to ship something out of China. A lot of listings on Alibaba (probably because it is more geared toward B2B transactions) require you to sort out the shipping from whatever foreign port.

I wasn’t willing to put the effort into figuring it out — although it looks like being an importer with an online store could be a fairly lucrative endeavor. In poking around the Alibaba site, though, I found AliExpress … same companies offering the same products at a slightly higher price, but in smaller quantities and with someone else sorting the shipping. Ten pairs of magnet buttons for 3.55$ Buying something posted from China means you cannot be in a hurry — estimated delivery is 4-6 weeks out … but jewelry findings (especially clasps) are a quarter the cost, sewing bits, housewares (I got some of the plastic cutters to make ‘animal crackers’ for a tenth the price @ Williams Sonoma).

Maybe I’m not getting the exact same thing — since the 7$ magnet says it is made in China anyway … that’s debatable — but buying something you don’t need for a few months sure saves a lot of money. I can see why Alibaba — basically a broker that connects manufacturers with retailers and end customers — makes so much money Yahoo wants to divest their money losing search engine / e-mail business and just ‘live’ off of their investment in Alibaba. 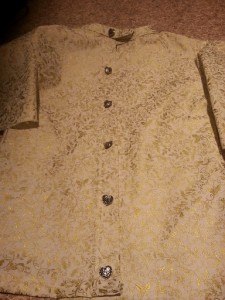 And the bottom hem has been finished off: 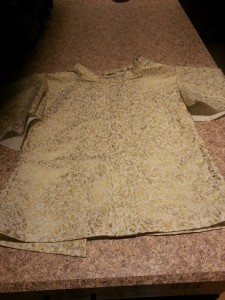 Just need to get the sleeves sorted (and finish off the bias strip along the collar) and we have a shirt.

I’m getting close! The circle skirt is finished. I still need to finish the sleeves and bottom hem. I didn’t realize buttonholes were such a thing! I am going to try stitching them by hand. I did some research on it the past few days, and I have located a really great site at Williams Clothiers that provides incredibly detailed instructions … so I’m feeling pretty confident in my ability to do it. Need to pick up some beeswax, buttonhole thread, and buttons (I’m going to let Anya pick her buttons at the store … hopefully that works out for me!)

And a close-up of the collar – a 2″ bias-cut of fabric folded to create a 1/2″ collar. It is just basted in along the inside … but it looks really nice. 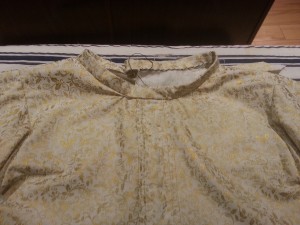