I need to programmatically parse an Excel file where items are grouped with arbitrary group sizes. We don’t want the person filling out the spreadsheet to need to fill in a group # column … so I’m exploring ways to read cell formatting so something like color can be used to show the groups. Reading the formatting isn’t a straight-forward process, so I wondered if Excel could populate a group number cell based on the cell’s attributes.

While it is possible, it’s not a viable solution. The mechanism to access data about a cell cannot be accessed directly and, unfortunately, requires a macro-enabled workbook. The mechanism also requires the user to remember to update the spreadsheet calculations when they have finished colorizing the rows. While I won’t be using this approach in my current project … I thought I’d record what I did for future reference.

We need to define a ‘name’ for the function. On the “Formulas” tab, select “Name Manager”.

Provide a name – I am using getBackgroundColor – and put the following in the “refers to” section: =GET.CELL(63,INDIRECT(“rc”,FALSE)) 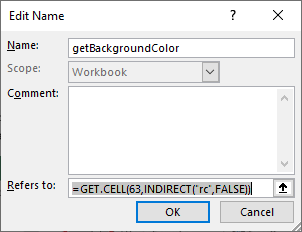 Now we can use this name within the cell formula: 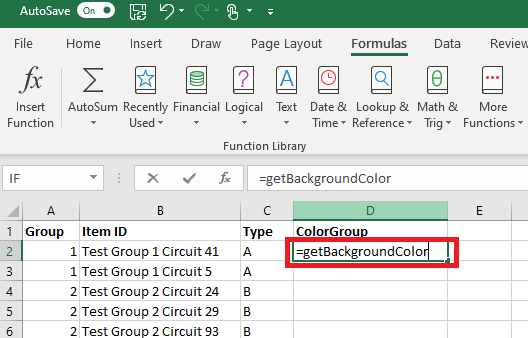 Select the rows for your first group and change the “fill color” of the row. 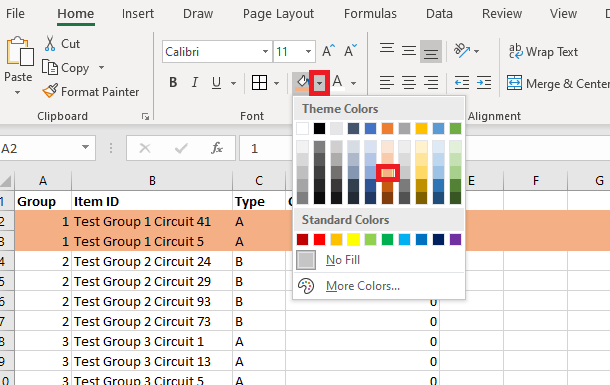 Repeat this process to colorize all of your groups – you can re-use a color as long as adjacent groups have different colors. Notice that the “ColorGroup” values do not change when you colorize your groups.

Now the colorized cells will have a non-zero value. 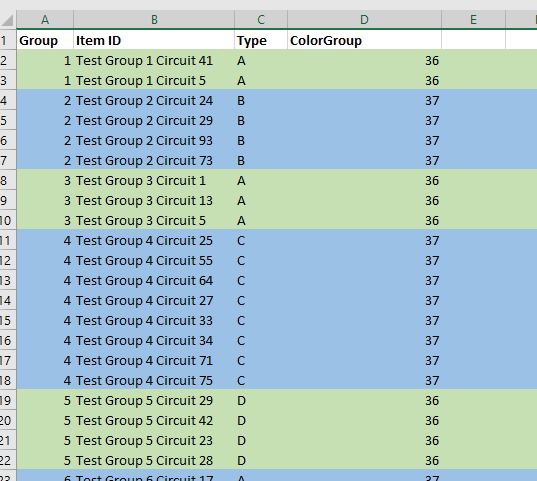 You will need to save your spreadsheet as a macro-enabled workbook (.xlsm). To add a function to Excel, hit Alt and F11. Select “Insert” => “Module” and paste in the following content and save.

In Excel, use the ReportColumnWidth function to print the width of a column into a cell. This is my row #3.

In row #2, I have a counter that provides the row number for use in Box Spout. Row #4 creates the line needed to set the column width in my code using the concat function.

Replacing the tab characters with newlines, I now have column widths set based on my data. 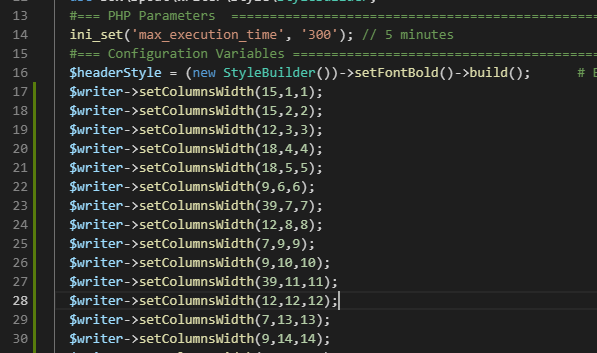 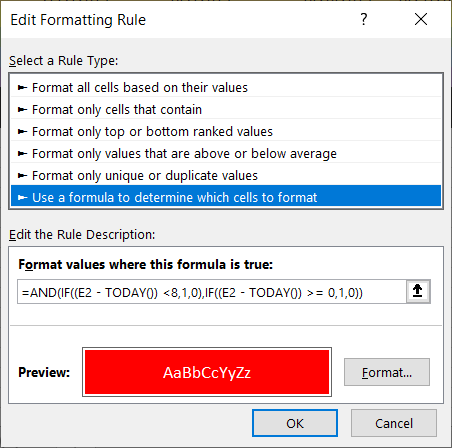 The result – every activity we need to plan for in the upcoming week is highlighted.

To use Power Query, first highlight the column containing the information for which you want a list of unique values.

On the “Data” ribbon bar, select “From Table/Range”

You’ll be asked to confirm where the source data is located – the highlighted selection should appear. Click “OK” to continue. 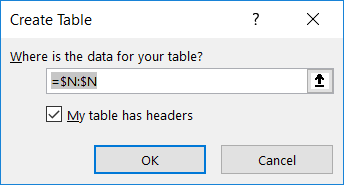 A new window will open – the Power Query Editor. On the “Home” ribbon bar, click on “Remove Rows” and select “Remove Duplicates” 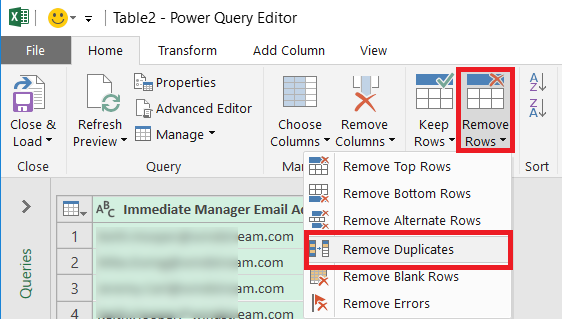 A unique list of values has been extracted in the Power Query editor – but you want to insert that data into your spreadsheet. Click the drop-down by “Close & Load” then select “Close & Load To …” 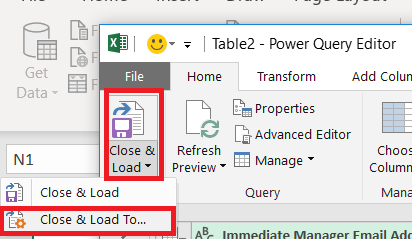 Now you can select where you want your list of unique values to appear – I am creating a table in an existing worksheet. Click “OK” to insert the unique list. 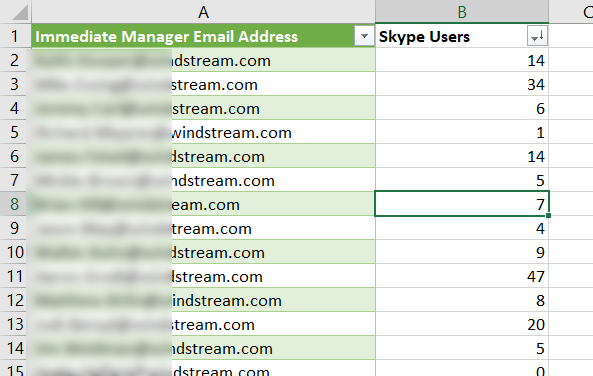 What happens when new records are added to my source data? The Power Query table does not automatically update as values are added to the source data. On the “Data” ribbon bar, click “Refresh All” to update the unique value list.

Determining if values from one list appear in another list is easy in Microsoft Access – it’s an unmatched query. I’d rather not have to switch between the two programs, and I was certain an Excel formula could do the same thing. It can!

And it does flag any manager from column H that does not appear in my list of upper level managers.

I am also able to filter my spreadsheet to display only records where the upper level manager does not appear in my summary table. 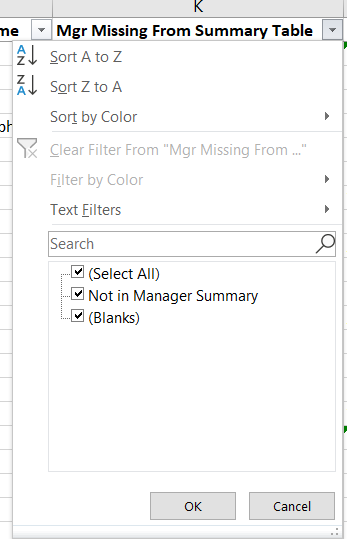 What is my formula doing? It is a combination of three functions

It starts with the IF function – a logical comparison – which is used as if(Test,ResultIfTestIsTrue, ResultIfTestIsFalse).

In conjunction with the VLOOKUP, I am using the ISNA function. This function is a logic test – it returns TRUE when the value is N/A and FALSE otherwise.

So my formula says “Look for the value of cell H2 in column A of the SOA6MgrSummary tab. If the result is N/A, put ‘Not in Manager Summary’ in this cell, otherwise leave this cell empty”.

For a project, we need to divide the entire company into groups. I chose organizational structure because it’s easy – I can determine the reporting structure for any employee or contractor, and I can roll people into groups under which ever level of manager I want. 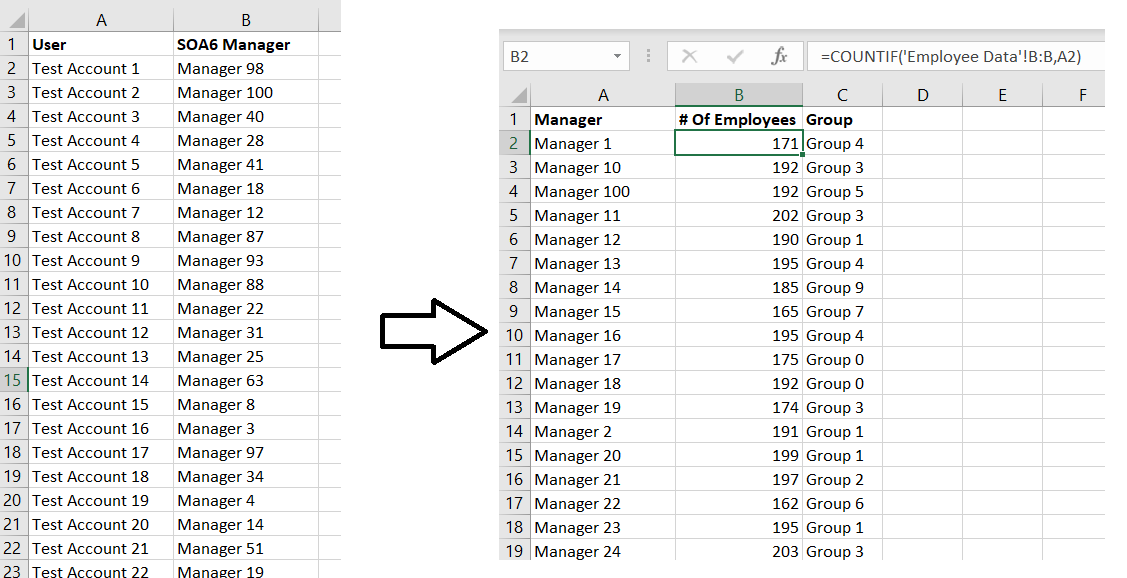 I only have one condition, so with a quick listing of the groups, I can add a column that tells me how many individuals are included in each group. 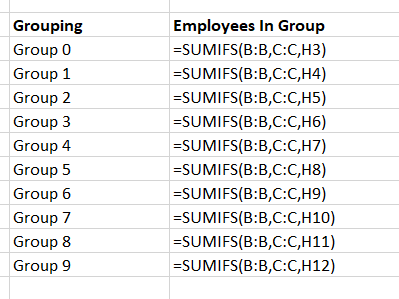 Bonus did you know – instead of specifying a start and end cell for a range, you can use the entire column. Instead of saying my “Range of data to sum” is B2:B101, I just used B:B to select the entire “B” column.

Viewing the values, I can see that my group size is not consistent. 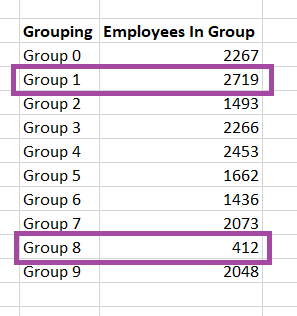 As I adjust the group to which the manager is assigned, these sums are updated in real-time. 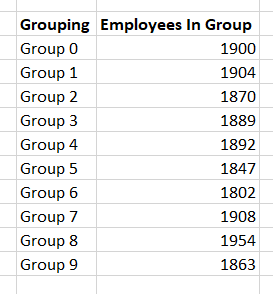 Being able to save documents directly to Teams, to sync documents and work on them locally, and to just store documents locally provides a lot of options when you’re saving a document. For me, though, a lot of options also means I’m not always sure which option I chose 😊 In which Teams space is this document saved? Did I stash it locally because I’m not ready for other people to peruse it?

Luckily where the document is saved can quickly be displayed in the Office 365 applications. Click “File” on the ribbon bar.

A document on a local or network drive will have a path starting with the drive letter. Clicking “Open file location” will open a File Explorer window to the folder containing the document.

And a document that hasn’t been saved won’t have any file information listed. 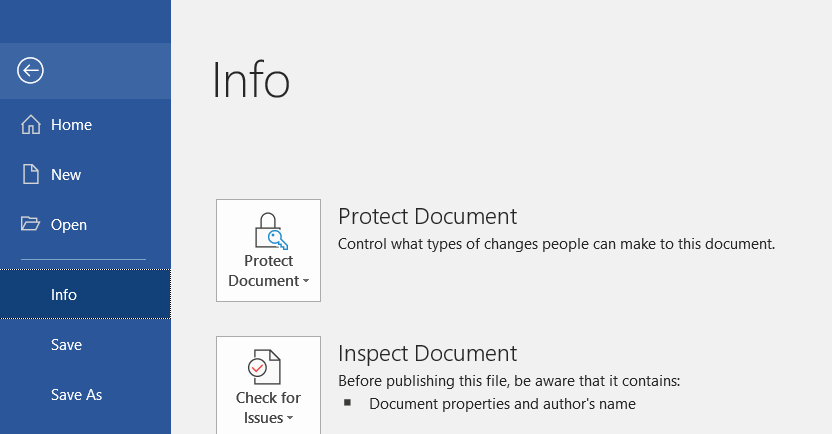 I frequently need to correlate two sets of data – generally information about accounts, where the logon ID will be found in both data sets. I’ve imported my information into Access, defined a relationship between the two tables, and used a query to correlate my data. I’ve written quick scripts to pull the data into an associative array for correlation. These are not quick approaches.

Today, I have a list of individuals with their reporting structure and need to identify which accounts have Skype for Business provisioned.

The Skype user list is, unfortunately, comes from a different program. 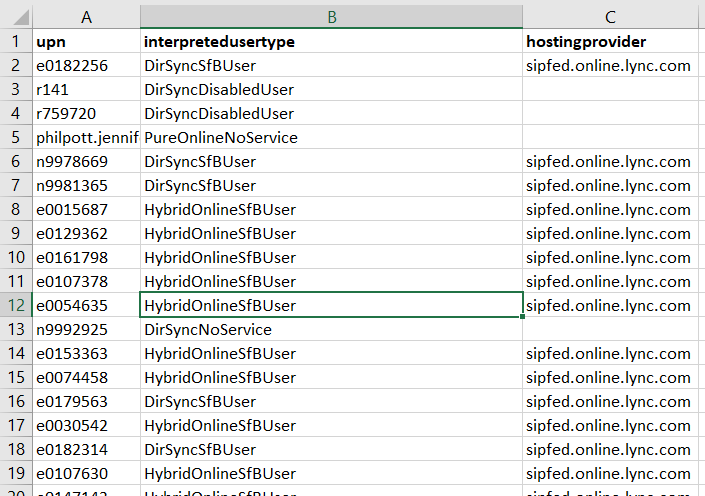 To lookup user IDs from the first table against the Skype info in the second table, I use =VLOOKUP(B2,S4BInfo!A:B,2,FALSE)

Note that the third parameter column number may not match the column number in the sheet – if I used the range C:D from the table below, I would still want to return the data in column 2 because my target data is still the second column in the search range. 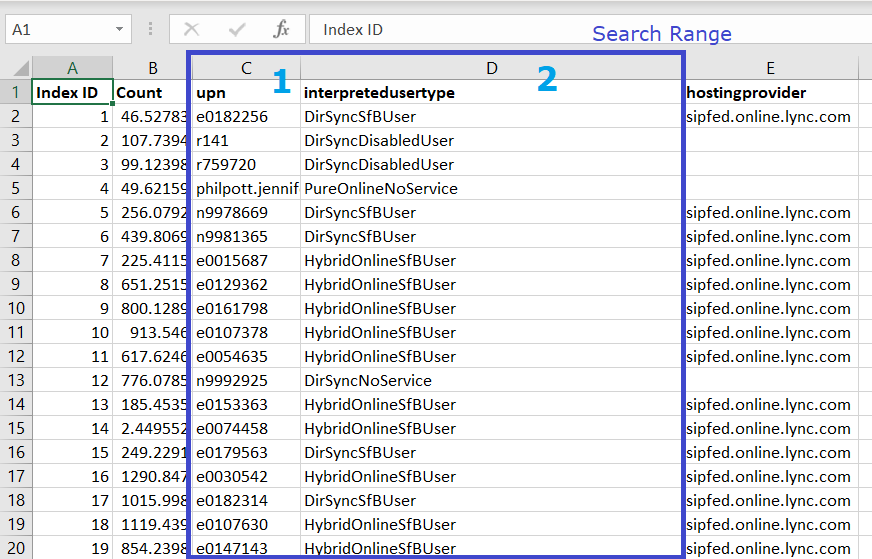 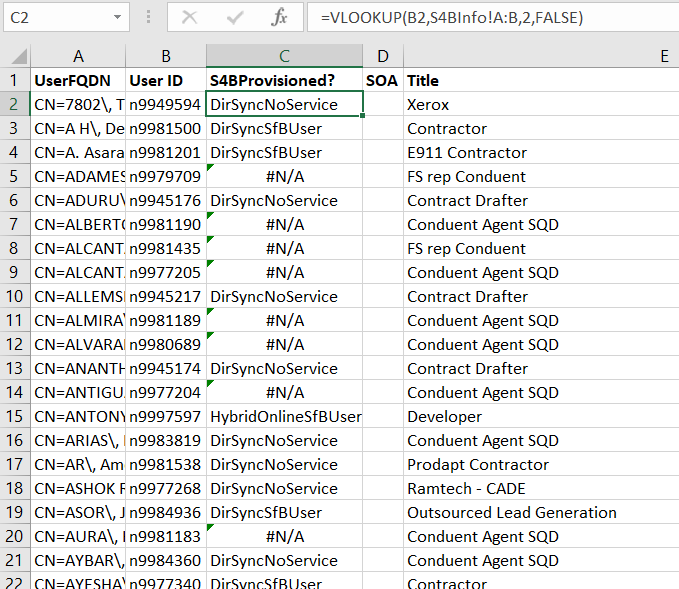 I use Excel’s COUNTIF function a LOT for reporting. When I want to count the number of transactions that occurred per day (or during a date range), it’s easy enough to get the list of IF’s to count. But when I need to find the occurrence of different text strings, I need a unique list of the strings first. “Remove duplicates” quickly exactly what I need.

In this example, I have a list of all employees and contractor’s departments and titles – I want to know how many people are in each department and how many people have each title. Removing duplicates modifies the data, so the first step is to make a copy of the spreadsheet. Highlight the data. Select “Data” on the ribbon bar, then select “Remove Duplicates”

Select the column(s) where you want to remove duplicate data. This could be exact duplicates across multiple columns (e.g. the unique “City, State” combinations), or (in this case) I just want a unique list of departments. Click OK. 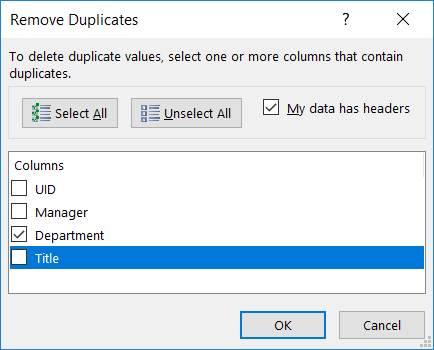 A summary will be displayed showing you how many records were removed and how many unique values remain.

Now that I have a complete listing of departments, I can use my COUNTIF function to show how many employees and contractors are in each department.

Now I have a unique list of titles as well.