My arrow keys were moving my mouse pointer. And, unlike all of the search results which said I had turned on some ease-of-use feature … 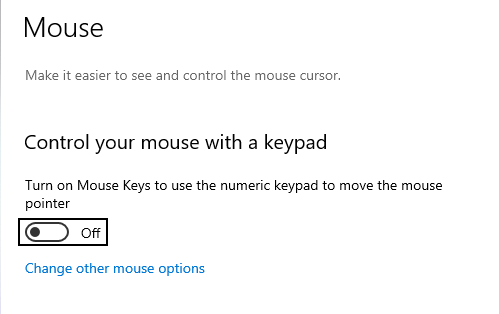 It seems like there is an odd bug between Windows 10 build 1903 and MS Paint. I had a pbrush window open and had selected some of the image (something I was pasting into a usage document). Somehow the “arrow keys move this selection around in pbrush” translated into the arrow keys moving my mouse pointer around everywhere else. Simply closing pbrush sorted the problem.

For times when automatic recovery is the problem (recovery loop), you can disable it:

A year or three ago, we had set up a group policy to display logon information in the Windows welcome screen — last logon time, information about any bad passwords since your last successful logon. It’s nice, but you are unable to log in if the information is unavailable. So we disabled the setting (just clearing a GPO setting doesn’t always remove the config from anywhere it’s already set … you’ve got to change to the desired setting). Aaaaand … one server still shows the logon info. Or, more accurately, fails to display it and prevents the domain account from logging on. Luckily it’s a member computer and we can just log in with local accounts.

It seems that the local computer policy got corrupted. After deleting registry.pol from c:\Windows\System32\GroupPolicy\Machine … I am able to modify the local computer security policy. GPO settings from the domain are also applied as expected. WooHoo! I can sign in using domain IDs again!

Since I’ve got a larger hard drive installed, I have both Fedora and Windows in a dual boot configuration. I have a shared NTFS partition for data, but it’s mounted as read-only under Fedora. Turns out that Fedora sees the file system as not cleanly shut down when Windows Fast Boot is enabled. I disabled fast boot in power management, and the shared data volume is mounted rw as expected.

LAPS is Microsoft’s solution to a long-existing problem within a corporation using Windows computers: when you image computers, all of the local administrator passwords are the same. Now some organizations implemented a process to routinely change that password, but someone who is able to compromise the local administrator password on one box basically owns all of the other imaged workstations until the next password change.

Because your computer’s local administrator password is the same as everyone else’s, IT support cannot just give you a local password to access your box when it is malfunctioning. This means remote employees with incorrect system settings end up driving into an office just to allow an IT person to log into the box.

With LAPS, there is no longer one ring to rule them all – LAPS allows us to maintain unique local administrator passwords on domain member computers. A user can be provided their local administrator password without allowing access to all of the other domain-member PCs (or a compromised password one one box lets the attacker own only that box). A compromised box is still a problem, but access to other boxes within the domain would only be possible by retrieving other credentials stored on the device.

Security: The end user is prevented from accessing the password or interacting with the process. The computer account manages the password, not the user (per section 4 LAPS_TechnicalSpecification.docx from https://www.microsoft.com/en-us/download/details.aspx?id=46899).

Within the directory, read access is insufficient (per https://blogs.msdn.microsoft.com/laps/2015/06/01/laps-and-password-storage-in-clear-text-in-ad/) to view the attribute values. In my proposed deployment, users (even those who will be retrieving the password legitimately) will use a web interface, so a single service acct will have read access to the confidential ms-Mcs-AdmPwd attribute and write access to ms-Mcs-AdminPwdExpirationTime. There are already powershell scripts published to search an improperly secured directory and dump a list of computer names & local administrator passwords. You should run Find-AdmPwdExtendedrights -identity :<OU FQDN> to determine who has the ability to read the password values to avoid this really embarrassing oversight.

Should anyone have access to read the ms-Mcs-AdmPwd value beyond the service account? If the web interface goes down for some reason, is obtaining the local administrator password sufficiently important that, for example, help desk management should be able to see the password through the MS provided client? Depends on the use cases, but I’m guessing yes (if for no other reason than the top level AD admins will have access and will probably get rung up to find the password if the site goes down).

In the AD permissions, watch who has write permission to ms-Mcs-AdminPwdExpirationTime as write access allows someone to bump out the expiry date for the local admin password. Are we paranoid enough to run a filter for expiry > GPO interval? Or does setting “not not allow password expiration time longer than required by policy” to Enabled sufficently mitigate the issue? To me, it does … but the answer really depends on how confidential the data on these computers happens to be.

With read access to ms-Mcs-AdmPwdExpirationTime, you can ascertain which computers are using LAPS to manage the local administrator password (a future value is set in the attribute) and which are not (a null or past value). Is that a significant enough security risk to worry about mitigating? An attacker may try to limit their attacks to computers that do not use LAPS to manage the local admin password. They can also ascertain how long the current password will be valid.

How do you gain access to the box if the local admin password stored in AD does not work (for whatever reason)? I don’t think you’re worse off than you would be today – someone might give you the local desktop password, someone might make you drive into the office … but bears considering if we’ve created a scenario where someone might have a bigger problem than under the current setup.

Schema extension needs to be loaded. Remove extended rights from attribute for everyone who has it. Add computer self rights. Add control access for web service acct – some individuals too as backup in case web server is down??

Does a report on almost expired passwords and notify someone have value?

Someone else figures this out, not my deal-e-o. Set GPO for test machines, make sure value populates, test logon to machine with password from AD. Provide mechanism to force update of local admin password on specific machine (i.e. if I ring in and get the local admin password today, it should get changed to a new password in some short delta time).

Additionally we need a function to clear the password expiry (force the machine to set a new password) to be used after local password is given to an end user.

Can we map user to computer name and give the user a process to recover password without calling HD? Or have the manager log in & be able to pull local administrator for their directs? Or some other way to go about actually reducing call volume.

Excluding ms-Mcs-AdmPwd  from repl to RODC – really no point to it being there.

Do we get this hooked up for acquired company domains too, or do they wait until they get in the WIN domain?

Does this facilitate new machine deployment to remote users? If you get a newly imaged machine & know its name, get the local admin password, log in, VPN in … can you do a run-as to get your creds cached? Or do a change user and still have the VPN session running so you can change to a domain user account?

LAPS For Servers: Should this be done on servers too? Web site could restrict who could view desktops v/s who could view servers … but it would save time/effort when someone leaves the group/company there too. Could even have non-TSG folks who would be able to get access to specific boxes – no idea if that’s something Michael would want, but same idea as the desktop side where now I wouldn’t give someone the password ‘cause it’s the password for thousands of other computers … may be people they wouldn’t want having local admin on any WIN box they maintain … but having local admin on the four boxes that run their app … maybe that’s a bonus. If it is deployed to servers, make sure they don’t put it on DCs (unless you want to use LAPS to manage the domain administrator password … which is an interesting consideration but has so many potential problems I don’t want to think about it right now especially since you’d have to find which DC updated the password most recently).

LAPS For VDI: Should this be done on VDI workstations? Even though it’s a easier to set the password on VDI the base VDI images than each individual workstation, it’s still manual effort & provides an attack vector for all of the *other* VDI sessions. Persistent sessions are OK without any thought because functionally no different than workstations. Non-persistent with new name each time are OK too – although I suspect you end up with a BUNCH of machine objects in AD that need to be cleaned up as new machine names come online. Maybe VDI sorts this … but the LAPS ‘stuff’ is functionally no different than bringing a whole bunch of new workstations online all the time.

Non-persistent sessions with same computer name … since the password update interval probably won’t have elapsed, the in-image password will be used. Can implement an on-boot script that clears AdmPwdExpirationTime to force change. Or a script to clear value on system shutdown (but that would need to handle non-clean shutdowns). That would require some testing.

We can have a full proof of concept type test by loading schema into test active directory (verify no adverse impact is seen) and having a workstation joined to the test domain. We could provide a quick web site where you input a computer name & get back a password (basically lacking the security-related controls where # of requests generate some action). This would allow testing of the password on the local machine. Would also allow testing of force-updating the local admin password.

Once we determine that this is worth the effort, web site would need to be flushed out (DB created for audit tracking). Schema and rights would need to be set up in AD. Then it’s pretty much on the desktop / GPO side. I’d recommend setting the GPO for a small number of test workstations first … but that’s what they do for pretty much any GPO change so not exactly ground breaking.