We’ve got one raised bed completed — the soil raked out, blocks pretty much straightened (and all of the other blocks from the old garden beds have been transported to the new garden location, so we’re ready to get more raised beds started) 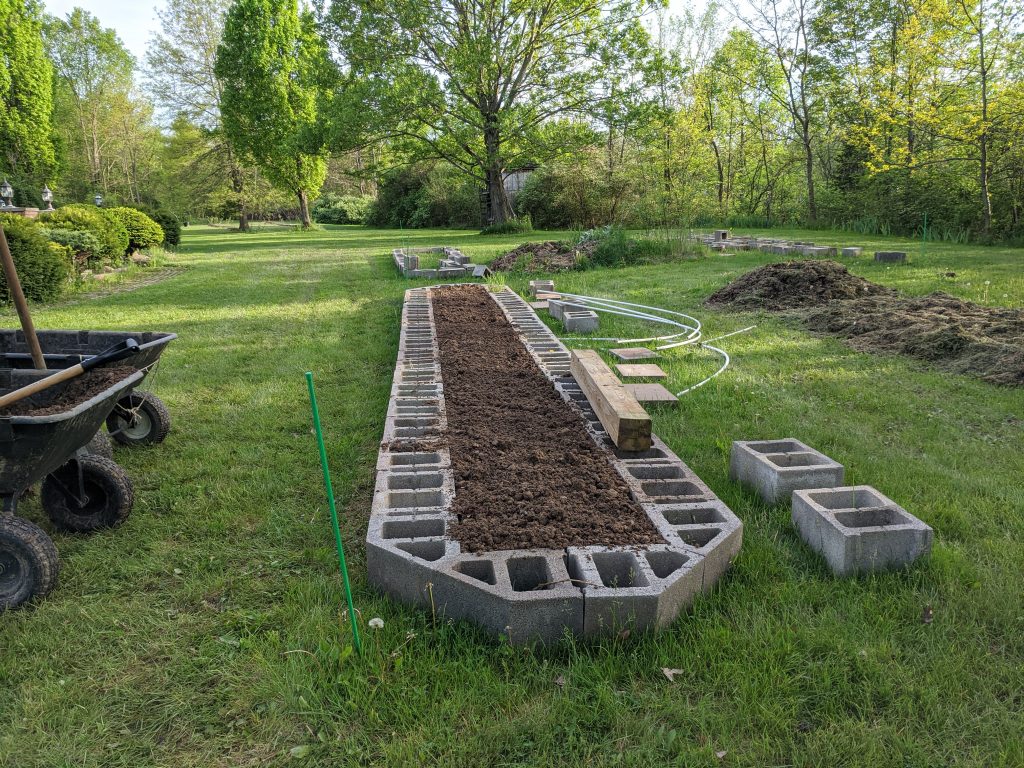 That means it’s time to get some plants in the ground — we brought the ten tomato plants and ten pepper plants that have been growing indoors since April 15th. I placed the tomato cages in the garden and set a pot inside each cage. Anya and I built the pepper cages (and then rebuilt the pepper cages because a few bent stakes + half a dozen in use to mark out the other bed locations mean I didn’t quite have enough to build squares … but we got ten triangles). Then it was time to dig. Anya was excited to use the gardening tools I got her a few years ago (and even let me keep my trowel in her bag). 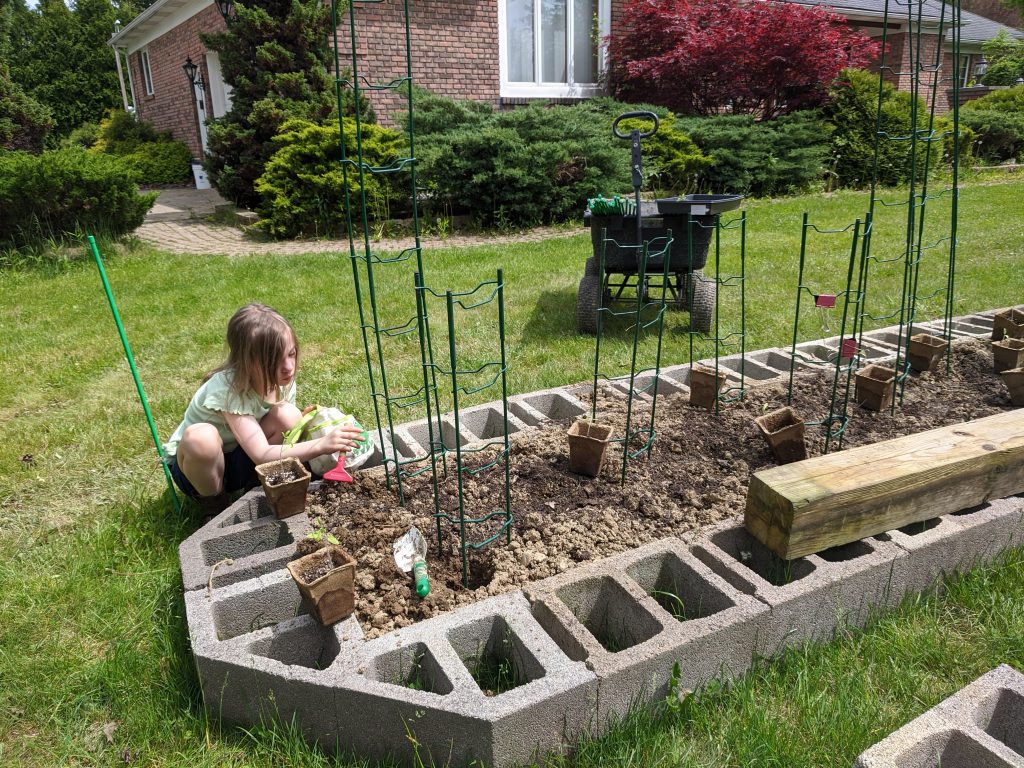 85-90 degree days probably aren’t the best time to plant starter plants, but we had a couple five gallon buckets of water from the well and ensured the soil was nice and wet before planting. Lots of digging … 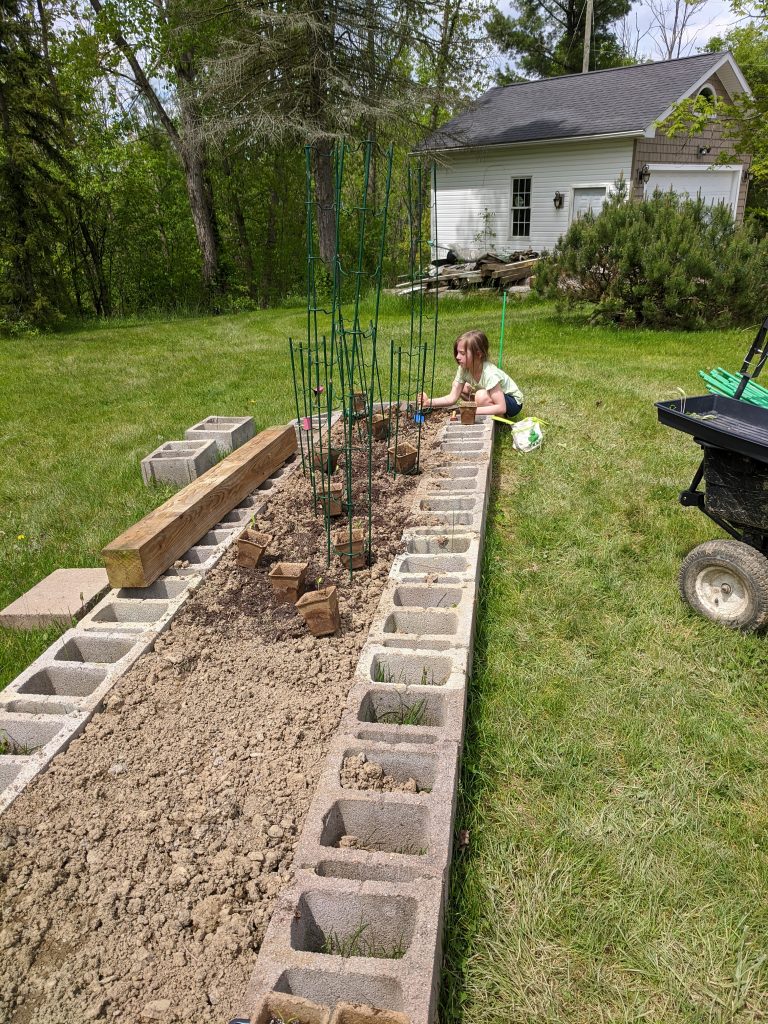 And still more digging … we have twenty plants outdoors. 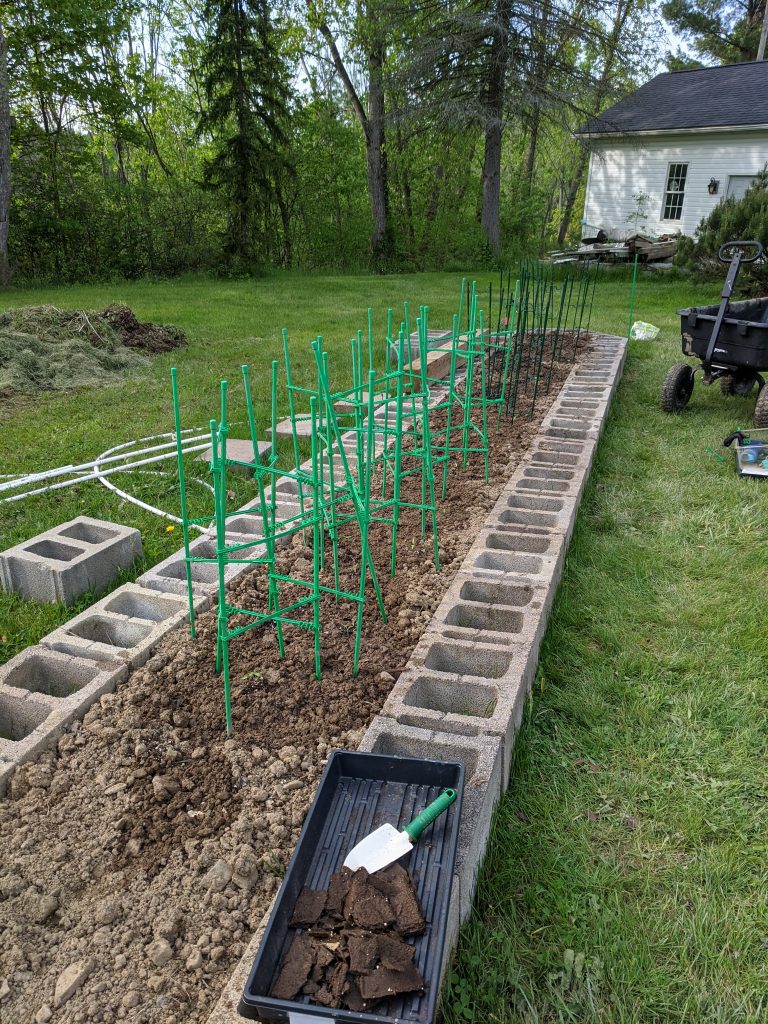 Since it’s been so hot, I wanted to add some sort of mulch to keep the soil from drying out. About an inch down, it’s moist and cool … but the top inch is getting very dry. I told Anya about the first garden Scott and I had in Ohio — a friend of his ran a greenhouse, and the friend’s dad rented out plots of land for gardening. The guy’s dad told us to plant our tomatoes really deep because the stems would actually root out and make a stronger plant. Figure the stems would root out better if they weren’t in hot, dry soil!

We have grass clippings that I’ve been mixing with leaves from last year as I haul the leaves from the old garden beds (I threw a couple inch layer of leaves on top of the bed at the end of the season to act as a mulch until I was ready to plant again). But I’ve only got about half of our grass clippings incorporated, and the old garden is about 75% cleared of leaves. I’ve certainly got extra grass available. Now fresh grass can pull some nitrogen as it first decomposes — it’ll return that nitrogen eventually — and it gets hot as it decomposes. I’ve intentionally sprinkled a thin layer of grass mulch instead of heaping an inch or three of mulch around the plants. Now we’re ready to grow! 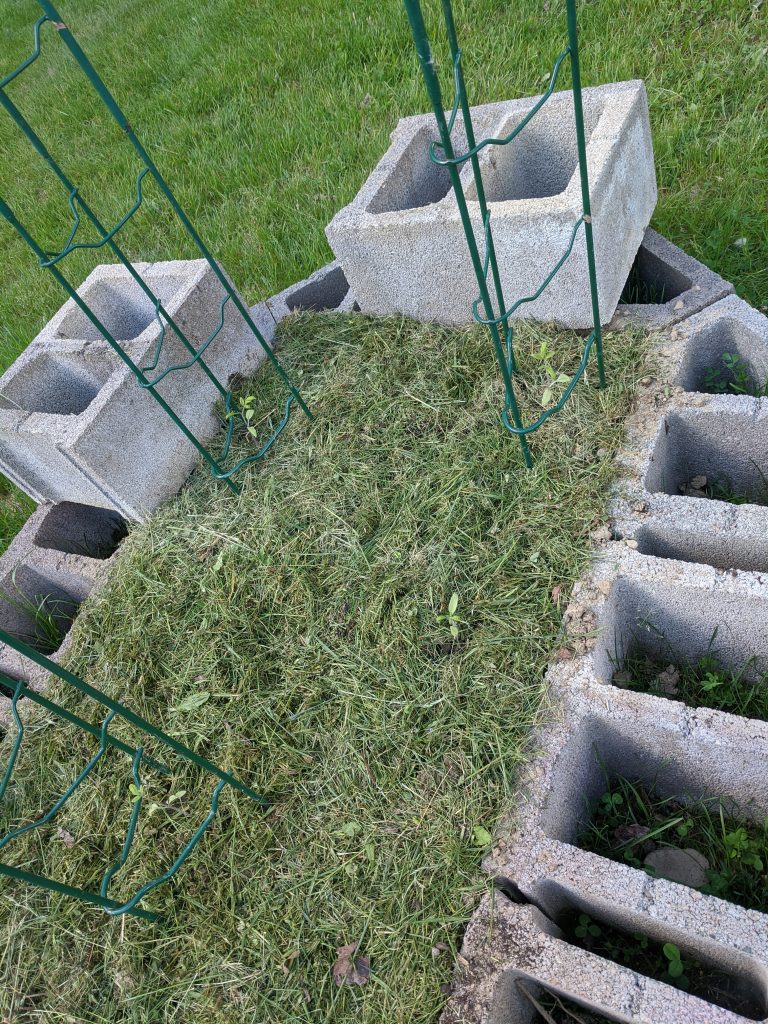 We’ve got dirt in one of the beds — ready to get some plants in tomorrow! 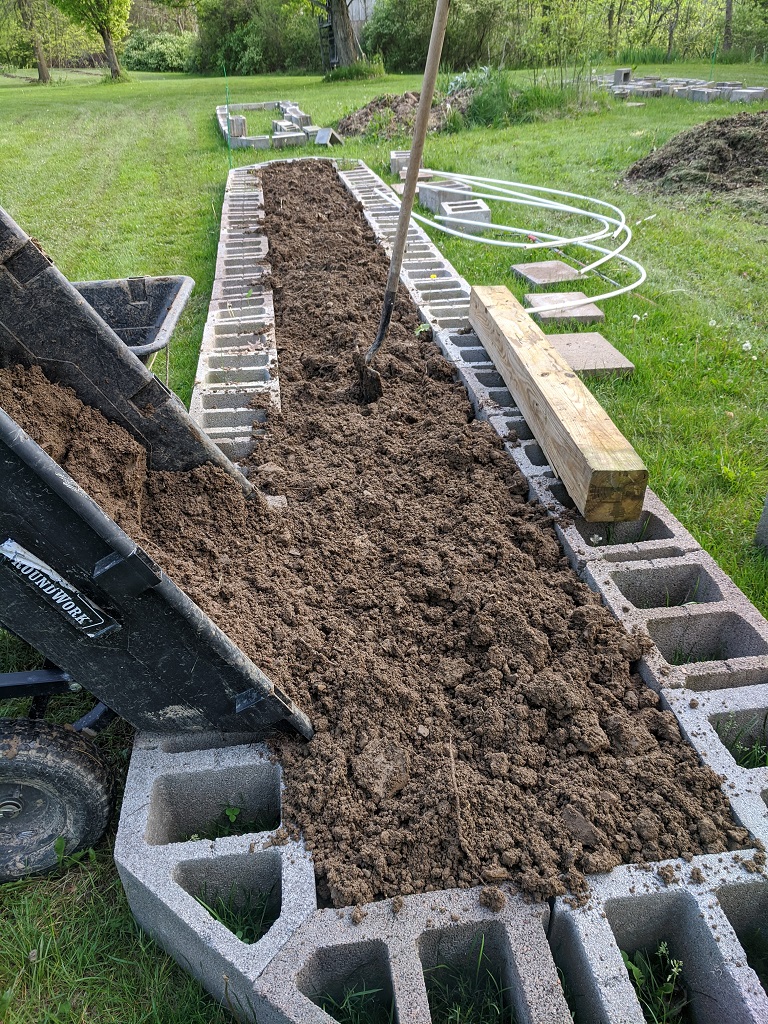 We had a day-long break in the rain yesterday, so I put some work into rebuilding the raised beds. I transported all of the small blocks to the new garden area. There’s a pile of not-yet-composted material (and some clay soil) that will need to get hauled over to our new compost area … but that’s the last step. 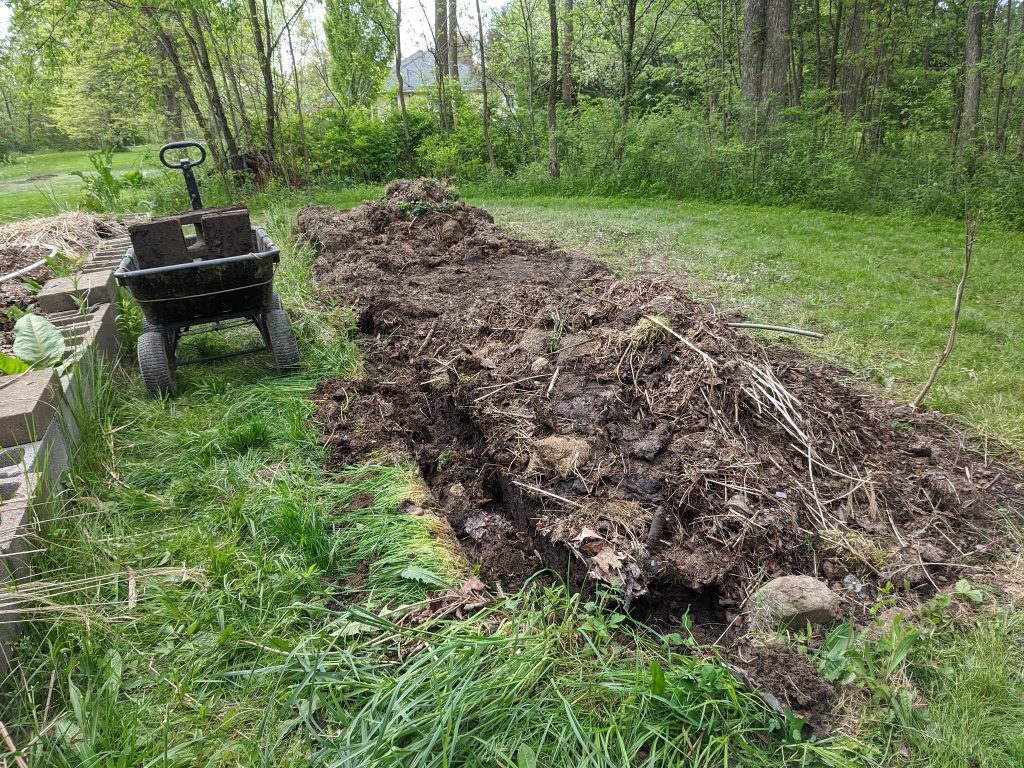 I also got a tightly packed leaf layer along the bottom of the bed. Reading about building raised beds on existing lawn, people put down a layer of cardboard or newspaper to prevent the existing plants from invading the garden. It’ll rain all day today, and we’ll stomp it down again tomorrow. Then there’s a bunch of dirt to haul before I can get some plants out into the new garden space. 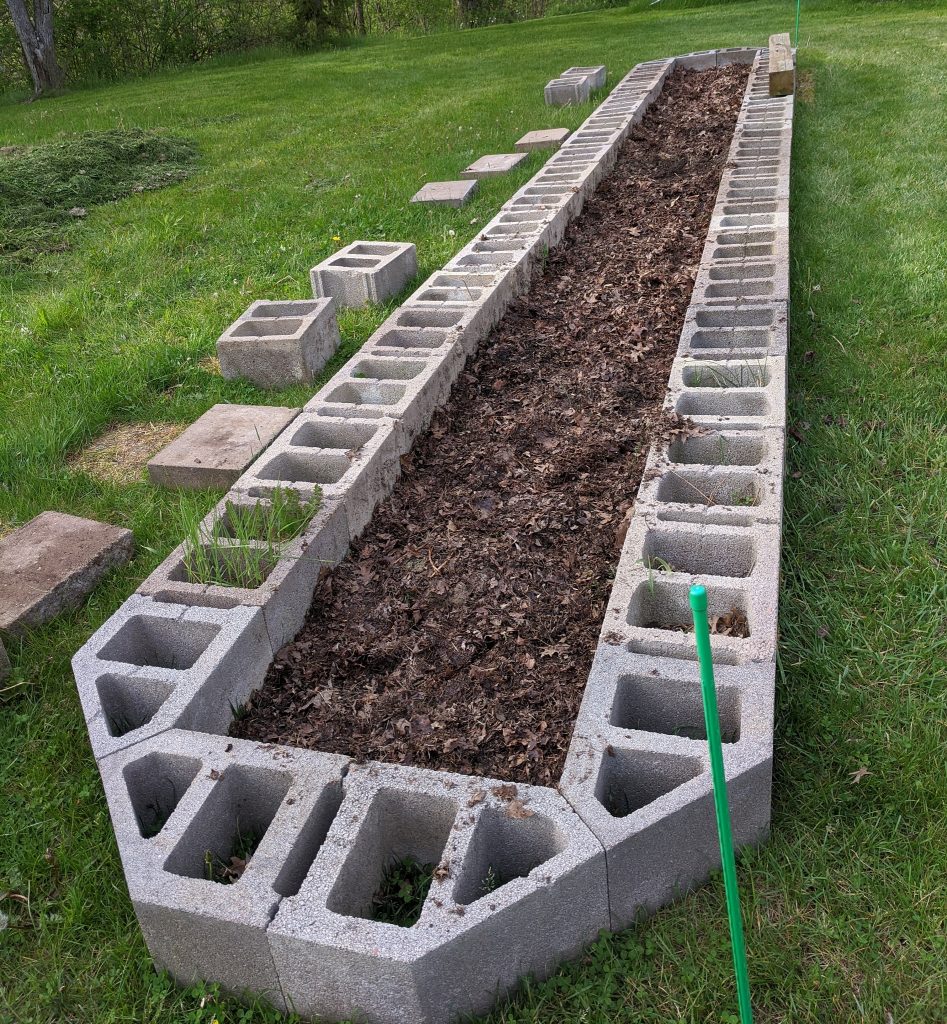 We built a pair of raised beds near our back woods — it was a nicely sheltered location, but too shady to grow much. The space is limited, too; and we wanted to have more garden space. The first step was going to be tilling, but we encountered an old tree stump under the grass. A good bit of excavation later, it was a pine tree with a very twisted root system. And several >3″ diameter roots running both horizontally into the garden area and down farther into the ground. Soooo … that’s a no on tilling a big patch to make a garden. 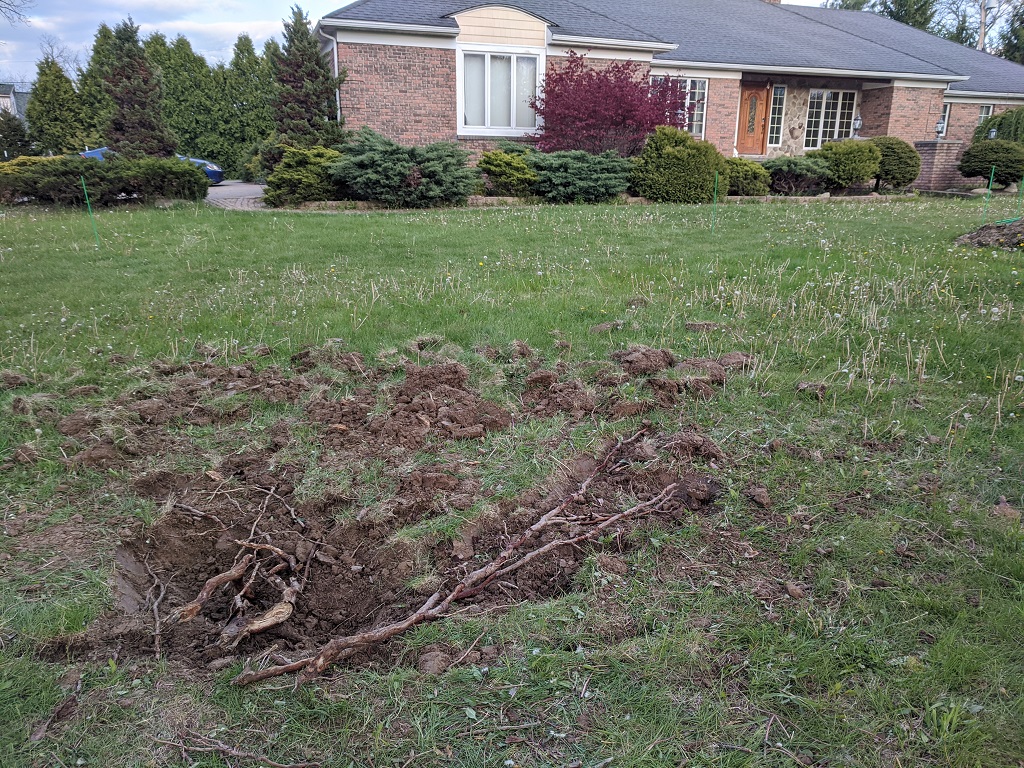 We have the blocks from the existing raised beds, so we’re creating four one-brick-high raised beds in the front yard. We’re going to compost grass clippings, leaves, kitchen scraps, etc between the beds and create hills for additional garden space next year. We’ll move the soil from the two raised beds into these new ones, and we’ve got some additional compost from the past year.

The first step is deconstructing the existing raised beds 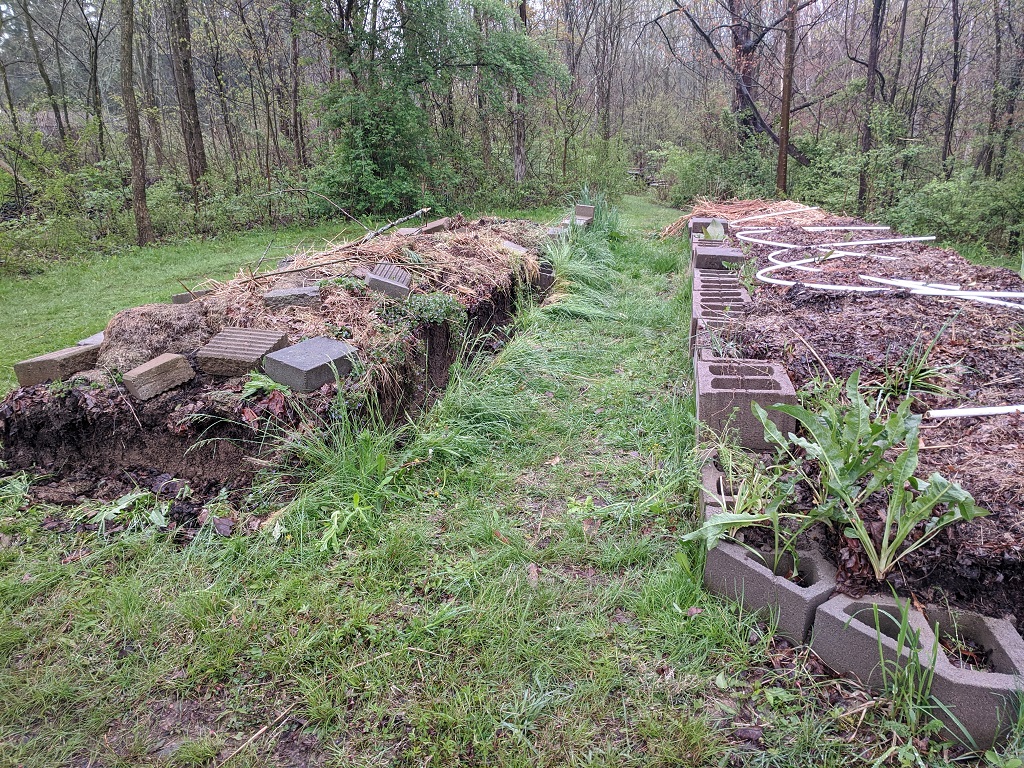 And we’re constructing four new, lower, beds with the blocks 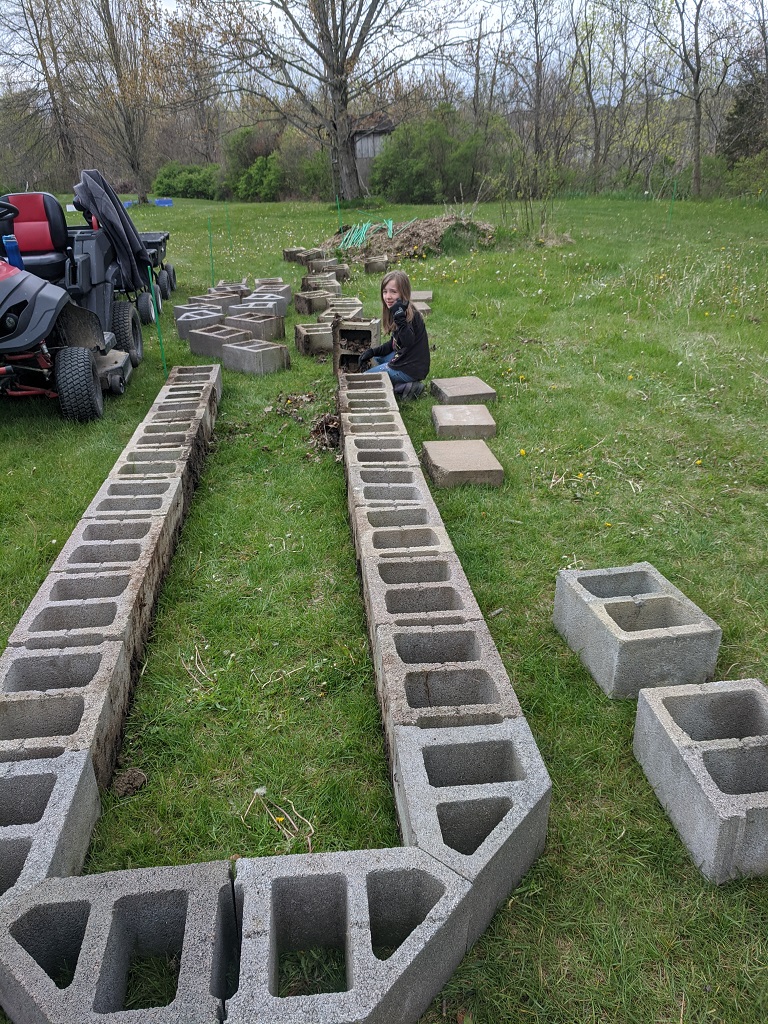 We’ve got two beds completed, and hauled about a third of the blocks for the remaining two 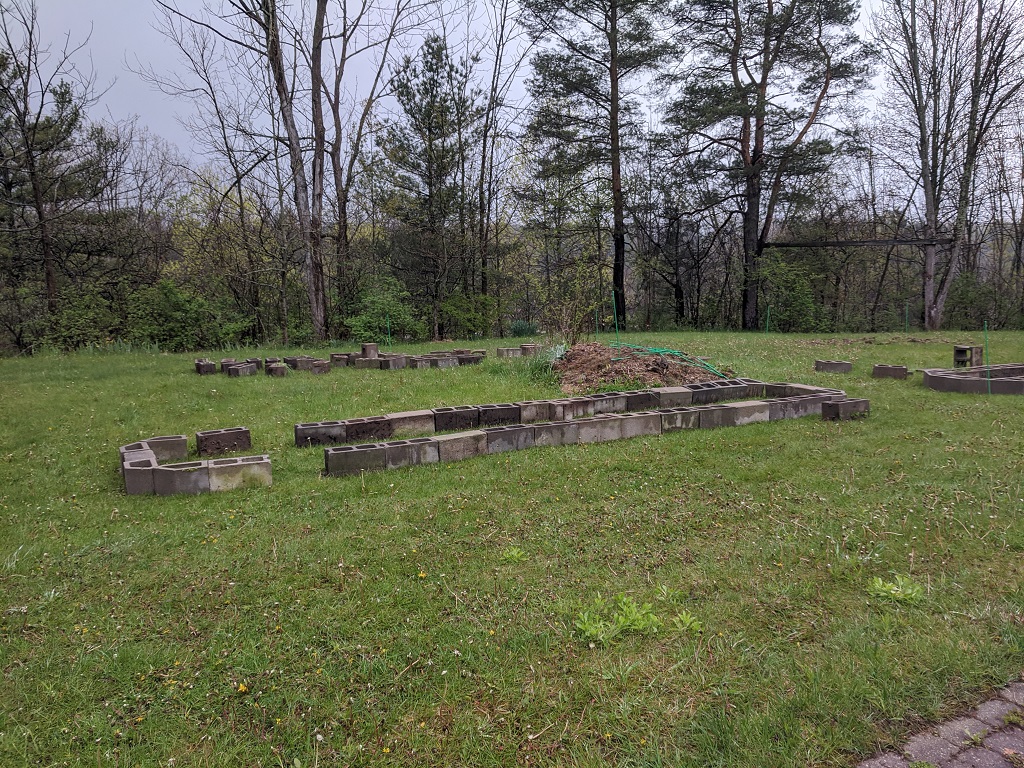 We’ve got to level off the geothermal hill — it’s been settling for a few years, and we can add compost on top if the area happens to fall farther. Unfortunately, a big storm blew in this evening … so we gathered up our stuff and ran for the house!