Using filebeat-7.17.4, we have seen instances where no harvesters will start and no IP communication is established with the logstash servers. Stopping the filebeat service, confirming the process and any associated network ports are closed, and then starting the service does not restore communication. In this situation, we have had to restart the ​logstash​ servers and immediately begin to see harvesters spin up in the log files:

I took over management of an ElasticSearch environment that has a lot of configuration inconsistencies. Unfortunately, the previous owners weren’t the ones who built the environment either … so no one knew why ServerX did one thing and ServerY did another. Didn’t mess with it (if it’s working, don’t break it!) until we encountered some users who couldn’t find their data — because, depending on which logstash server information transits, stuff ends up in different indices. So now we’re consolidating configurations and I am going to pull the “right” config files into a git repo so we can easily maintain consistency.

Except … any repository becomes in scope for security scanning. And, really, typing your password in clear text isn’t a wonderful plan. So my first step is using environment variables as configuration parameters in logstash.

The first thing to do is set the environment variables somewhere logstash can use them. In my case, I’m using a unit file that sources its environment from /etc/default/logstash

Once the environment variables are there, enclose the variable name in ${} and use it in the config:

Restart ElasticSearch and verify the pipeline(s) have started successfully.

I’ve been working on forking log data into two different indices based on an element contained within the record — if the filename being sent includes the string “BASELINE”, then the data goes into the baseline index, otherwise it goes into the scan index. The data being ingested has the file name in “@fields.myfilename”

It took a while to figure out how to get the value from the current data — event.get(‘[@fields][myfilename]’) to get the @fields.myfilename value.

The following logstash config accepts JSON inputs, parses the underscore-delimited filename into fields, replaces the dashes with underscores as KDL doesn’t handle dashes and wildcards in searches, and adds a flag to any record that should be a baseline. In the output section, that flag is then used to publish data to the appropriate index based on the baseline flag value.

There’s a long-standing bug in logstash where the private temp folder created for jruby isn’t cleaned up when the logstash process exits. To avoid filling up the temp disk space, I put together a quick script to check the PID associated with each jruby temp folder, see if it’s an active process, and remove the temp folder if the associated process doesn’t exist.

When the PID has been re-used, this means we’ve got an extra /tmp/jruby-### folder hanging about … but each folder is only 10 meg. The impacting issue is when we’ve restarted logstash a thousand times and a thousand ten meg folders are hanging about.

This script can be cron’d to run periodically or it can be run when the logstash service launches.

Logstash is a pipeline based data processing service. Data comes into logstash, is manipulated, and is sent elsewhere. The source is maintained on GitHub by ElasticCo.

Logstash was downloaded from ElasticCo and installed from a gzipped tar archive to the /opt/elk/logstash folder.

The Logstash server is configured using the logstash.yml file.

Logstash uses Log4J 2 for logging. Logging configuration is maintained in the log4j2.properties file

Each pipeline is configured in an individual config file that defines the input, any data manipulation to be performed, and the output.

As we have it configured, you must reload Logstash to implement any configuration changes. As errors in pipeline definitions will prevent the pipeline from loading, it is best to test the configuration prior to restarting Logstash.

Some errors may occur – if the test ends with “Configuration OK”, then it’s OK!

The configuration can automatically be reloaded when changes to config files are detected. This doesn’t give you the opportunity to test a configuration prior to it going live on the server (once it’s saved, it will be loaded … or not loaded if there’s an error)

Input instructs logstash about what format data the pipeline will receive – is JSON data being sent to the pipeline, is syslog sending log data to the pipeline, or does data come from STDIN? The types of data that can be received are defined by the input plugins. Each input has its own configuration parameters. We use Beats, syslog, JSON (a codec, not a filter type), Kafka, stuff

The input configuration also indicates which port to use for the pipeline – this needs to be unique!

Input for a pipeline on port 5055 receiving JSON formatted data 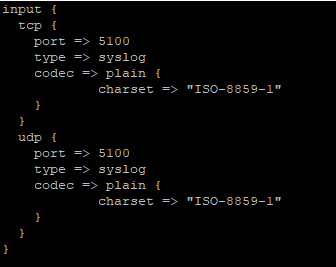 Output is similarly simple – various output plugins define the systems to which data can be shipped. Each output has its own configuration parameters – ElasticSearch, Kafka, and file are the three output plug-ins we currently use.

Most of the data we ingest into logstash is processed and sent to ElasticSearch. The data is indexed and available to users through ES and Kibana.

Some data is sent to Kafka basically as a holding queue. It is then picked up by the “aggregation” logstash server, processed some more, and relayed to the ElasticSearch system.

File output is generally used for debugging – seeing the output data allows you to verify your data manipulations are working property (as well as just make sure you see data transiting the pipeline without resorting to tcpdump!).

Filtering allows data to be removed, attributes to be added to records, and parses data into fields. The types of filters that can be applied are defined by the filter plugins. Each plugin has its own documentation. Most of our data streams are filtered using Grok – see below for more details on that.

Conditional rules can be used in filters. This example filters out messages that contain the string “FIREWALL”, “id=firewall”, or “FIREWALL_VRF” as the business need does not require these messages, so there’s no reason to waste disk space and I/O processing, indexing, and storing these messages.

This example adds a field, ‘sourcetype’, with a value that is based on the log file path. 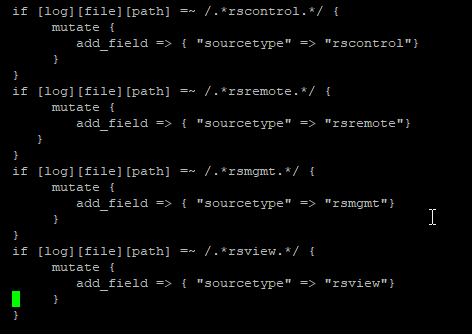 The grok filter is a Logstash plugin that is used to extract data from log records – this allows us to pull important information into distinct fields within the ElasticSearch record. Instead of having the full message in the ‘message’ field, you can have success/failure in its own field, the logon user in its own field, or the source IP in its own field. This allows more robust reporting. If the use case just wants to store data, parsing the record may not be required. But, if they want to report on the number of users logged in per hour or how much data is sent to each IP address, we need to have the relevant fields available in the document.

Patterns used by the grok filter are maintained in a Git repository – the grok-patterns contains the data types like ‘DATA’ in %{DATA:fieldname}

The following are the ones I’ve used most frequently:

In a system with a set format for log data, parsing the entire line is reasonable – and, often, there will be a filter for well-known log types. I.E. if you are using the default Apache HTTPD log format, you don’t need to write a filter for each component of the log line – just match either the HTTPD_COMBINEDLOG or HTTPD_COMMONLOG pattern.

But you can create your own filter as well – internally developed applications and less common vendor applications won’t have prebuilt filter rules.

Extracting an array of data

Instead of trying to map an entire line at once, you can extract individual data elements by matching an array of patterns within the message.

This means the IP and port information will be extracted regardless of the order in which the fields are written in the log record. This also allows you to parse data out of log records where multiple different formats are used (as an example, the NSS Firewall logs) instead of trying to write different parsers for each of the possible string combinations.

Logstash, by default, breaks when a match is found. This means you can ‘stack’ different filters instead of using if tests. Sometimes, though, you don’t want to break when a match is found – maybe you are extracting a bit of data that gets used in another match. In these cases, you can set break_on_match to ‘false’ in the grok rule.

I have also had to set break_on_match when extracting an array of values from a message. 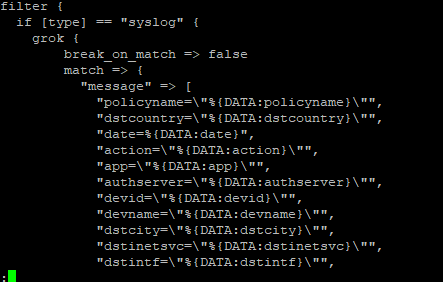 Viewing Data Transmitted to a Pipeline

Data from filebeat servers not received in ElasticSearch

After creating a syslog pipeline, it is convenient to be able to test that data is being received and parsed as expected. You can use the logger utility (from the util-linux package) using “-n” to specify the target server, -P to specify the target port, either -d for udp or -T for tcp, -i with the process name, -p with the log priority, and the message content in quotes.

As an example, this command sends a sample log record to the logstash server. If the pipeline is working properly, the document will appear in ElasticSearch.

The process to upgrade minor releases of LogStash is quite simple — stop service, drop the binaries in place, and start service. In this case, my upgrade process is slightly complicated by the fact our binaries aren’t installed to the “normal” location from the RPM. I am upgrading from 7.7.0 => 7.17.4

The first step is, obviously, to download the LogStash release you want – in this case, it is 7.17.4 as upgrading across major releases is not supported.

Before sending data, you need a pipleline on logstash to accept the data. If you are using an existing pipeline, you just need the proper host and port for the pipeline to use in the Filebeat configuration. If you need a new pipeline, the input needs to be of type ‘beats’

Download the appropriate version from https://www.elastic.co/downloads/past-releases#filebeat – I am currently using 7.17.4 as we have a few CentOS + servers.

Install the package (rpm -ihv filebeat-7.17.4-x86_64.rpm) – the installation package places the configuration files in /etc/filebeat and the binaries and other “stuff” in /usr/share/filebeat

Run filebeat in debug mode from the command line and watch for success or failure.
filebeat -e -c /etc/filebeat/filebeat.yml -d "*"

Assuming everything is running well, use systemctl start filebeat to run the service and systemctl enable filebeat to set it to launch on boot.

Filebeats will attempt to parse the log data and send a JSON object to the LogStash server. When you view the record in Kibana, you should see any fields parsed out with your grok rule – in this case, we have KAFKADIR, LOGLEVEL, LOGPARTITION, LOGSOURCE, and MESSAGE fields. 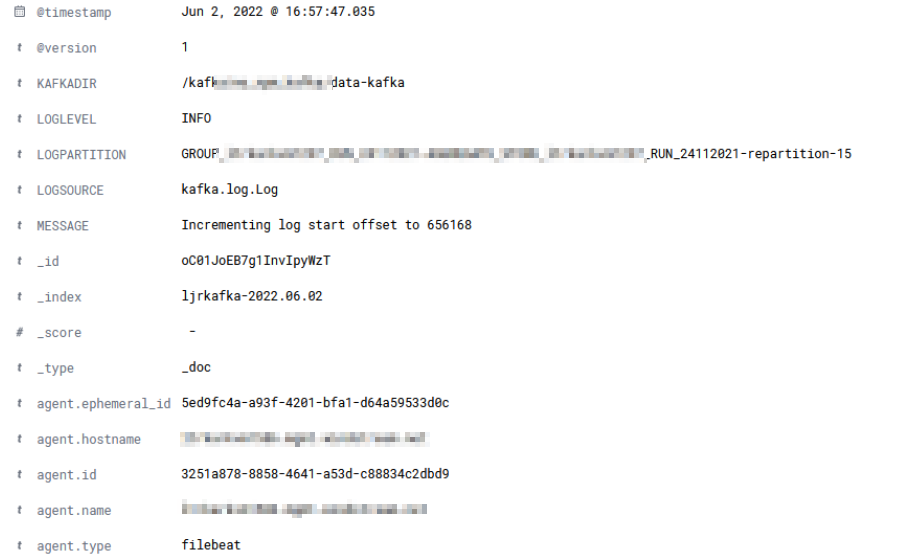 We now have a logstash data collector ready. We next need to create the index templates in ES

We have a number of logstash servers gathering data from various filebeat sources. We’ve recently experienced a problem where the pipeline stops getting data for some of those sources. Not all — and restarting the non-functional filebeat source sends data for ten minutes or so. We were able to rectify the immediate problem by restarting our logstash services (IT troubleshooting step #1 — we restarted all of the filebeats and, when that didn’t help, moved on to restarting the logstashes)

But we need to have a way to ensure this isn’t happening — losing days of log data from some sources is really bad. So I put together a Python script to verify there’s something coming in from each of the filebeat sources.