ORC presently does not allow for hunting deer with air guns. With smaller air guns, that makes sense from an ethical hunting standpoint (same reason, I assume, a minimum draw weight is defined for archery). But there are rather powerful air guns available — and I’d love to be able to hunt deer with something like an 50-cal AirForce Texan CF. There are other states that permit hunting big game with an air gun — and I’d encourage you to see about getting similar legislation enacted in Ohio.

Thank you for your time,
–Lisa

Trump’s potentially got exposure in issuing pardons if he’s covering up crimes in which he was involved. Bit of a legal stretch (and proving corrupt intent would be difficult). No point *now* with the OLC policy against indicting a sitting president, and we’ll probably get another “for the sake of unity, put the past in the past” administration. But it seems feasible.
And I’m curious how pardons impact 5th amendment protection. If you’ve got a pardon for *your* part in the crime, you’re not being ‘compelled in any criminal case to be a witness against himself’ and I expect could be compelled to testify against others (including Trump) who were involved. Or be charged for failing to provide honest testimony.
‘Having more Reps than any other state’ does not mean “the population is equitably represented”. The number of people represented by those Representatives (or electoral college delegates, for that matter)? Each House member represents ~702k Californians. Each electoral delegate represents ~677k Californians.
Congressional apportionment isn’t fractional, so there’s over- and under- representation — the distribution just advantages different states. Rhode Island had just over a million people in the 2010 census but have two reps — each of those individuals represent some 500k Rhode Islanders. There are states that fair worse in the HoR — Montana had just under a million and have one rep.
Taking the American government as a whole — low-population density states are over-represented in the Senate and Electoral College — which also means they are over-represented in SCOTUS. Asserting “the majority have a chance to win one half of the Legislature … a chance to create an impasse where nothing gets done” isn’t the most functional form of government imaginable. I understand and appreciate the “minority rights” idea behind over-representation. And, obviously, those in the minority will view the situation differently. But there’s a difference between the minority having enough power to force compromises toward their position and minority rule with … well, seemingly “fuck you”. Or minority rule with a majority who are able to prevent legislative changes (leading to the prevalence of Executive Orders).

Number of people represented by each rep in the Senate:

Number of people represented by each rep in the House of Representatives:

Worst deal for residents — high number of people represented by each rep:

The combination of which yields the over and under representation in the Electoral College (and the reason I think the National Popular Vote Interstate Compact is such a good idea).

And the worst deal

And the spreadsheet, in case it’s useful to someone else.

Our Township recently came across a provision in the Zoning Regulations that stipulated that, upon receipt of a request, the board shall approve said request. The county prosecutor’s office advised them that this phrasing means they must approve the request. Now, that’s a risk mitigation decision, not a purely legal one. If they don’t approve the request, they could end up in court arguing over the meaning of the word “shall”. Gutierrez de Martinez v. Lamagno 515 U.S. 417 (1995), as an example, indicates it’s not apt to be a losing case. But … our County Prosecutor’s office is quite circumspect and very cautious. You could argue that shall is not a word of obligation. But you could also replace ‘shall’ with ‘must’ or ‘may’ in your text and avoid any question. Given that the ordinances can be changed, the only down side to eliminating ambiguous language is time.

Last night, we attended a meeting where they discussed the proposed new language to avoid needing to rubber-stamp every submission. And … the new text is riddled with the word shall. When a request is submitted for a special event permit, the request shall, provided the requestors have addressed this list of considerations, be approved. I brought up the scenario where multiple requests are received for the same area for the same time-period. Each individual event has sufficiently managed crowds, parking, noise, health and safety facilities, etc. But in toto three Independence Day special events within a quarter mile of each other creates a traffic concern. Or twelve Memorial Day special events across the township will strain emergency response resources. They need the flexibility to say “sorry, you’re the fifth guy who wants to do something this weekend … no”.

America need an org that identifies police misconduct instead of DNA testing and will file motions for new trials to present the perfectly reasonable argument that flagrant misconduct is likely not an isolated incident. Somewhat like Project Innocence, but with a different basis for their requests.

There were some cops in Philly (well, I’m sure this isn’t unique to Philly) who got fed up with not finding evidence on people who they “knew” were clockin … so they planted what they needed to find, ignored search and seizure laws, etc. The city had to go back through a whole lot of cases because, hey, that’s reasonable doubt as Bob has been saying for three years that it wasn’t his crack. If memory serves, the city also had to fork over a bunch of money in restitution.
Would an officer who is willing to kill someone take the mindset of the Philly cops? ‘Knows’ the person is guilty, frustrated that no evidence can be found. Even without extrapolating additional misconduct, how many *other* people were ‘resisting’ like Mr. Floyd? People who ended up incarcerated for resisting arrest and/or assaulting an officer. The actions of the individuals in Minnesota seems like new evidence that would create reasonable doubt in other cases where the officers involved claim someone was resisting. Bob says he wasn’t resisting arrest. Officer Fred, who has demonstrably lied saying a compliant person was resisting, says Bob was resisting. That’s a far different assertion than Bob says he wasn’t resisting, Officer Fred, who is an upstanding officer with a decade of service, says Bob was resisting.

Every time I’ve watched a sci-fi movie where someone builds a robot that decides to annihilate humans, I wonder how the engineer missed out on the previous thousand movies where someone’s very good idea for a robot kills us all. I mean, sure it would be a really short movie if we pan into some lady sitting in a lab with a bunch of robotic bits spread out on a table and hear her say “Wait … I’ve seen Collossus: The Forbin Project … lets not do this”. And she shuts down the computer, shelves the components, turns the lights off, and goes home. But seriously, how could anyone about to install laser cannons on a drone not think “wait … “. Some movies address this with a four-laws derivative — I know the previous thousand robots went horribly awry, but here’s my idea at coding in guardrails.

Kind of think the same thing about zombie movies — the body of work tells you that really good precautions and quarantines are totally the way to go. But what happens IRL when there’s a contagious virus about? Exposed passengers from a cruise ship are flown back to the States. HHS’s welcome committee aren’t trained for infectious disease exposure and don’t kit up. 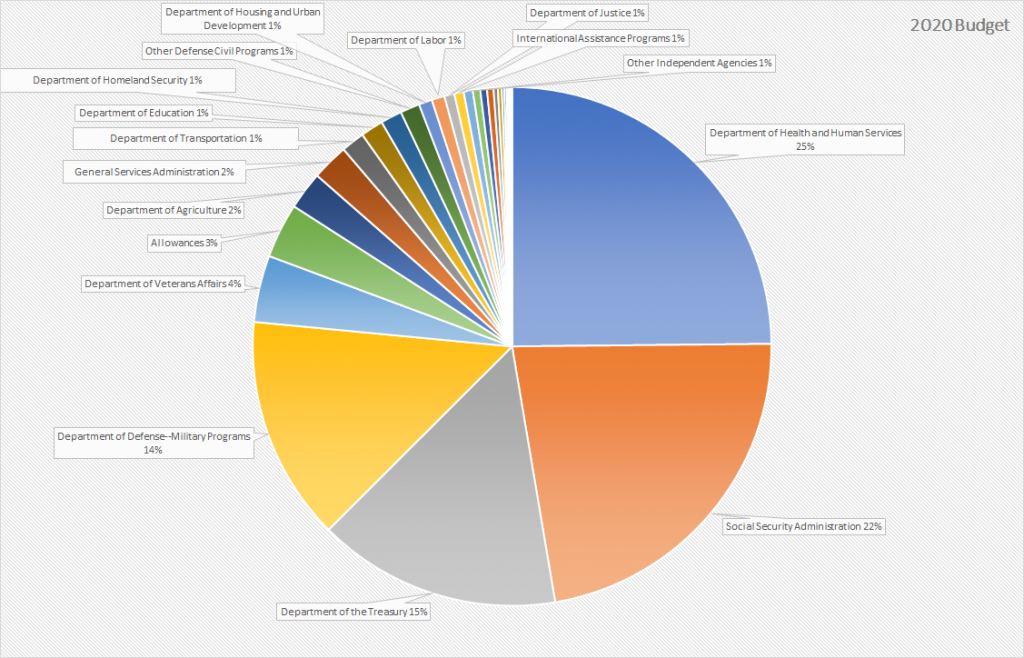 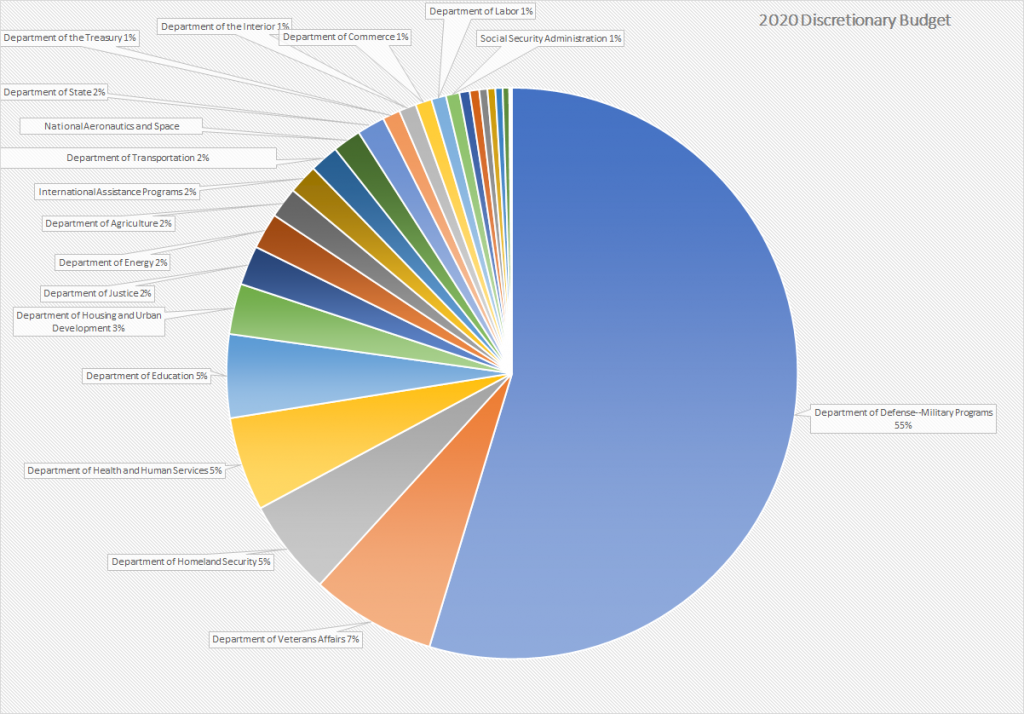 Here’s the latest pie charts of how the federal government spends its money. Again, there’s discretionary spending — spending from appropriation bills and the full budget which includes spending for things like Social Security, Medicare, and Medicaid which vary depending on the number of recipients and how much each recipient is being paid. This doesn’t mean the non-discretionary components couldn’t be changed — there’s been discussion of means testing Social Security payments and Medicare eligibility — but these changes are generally considered politically untenable (would you vote for the guy who just reduced your SS cheque because you happened to have a pension or money saved in a retirement account?). 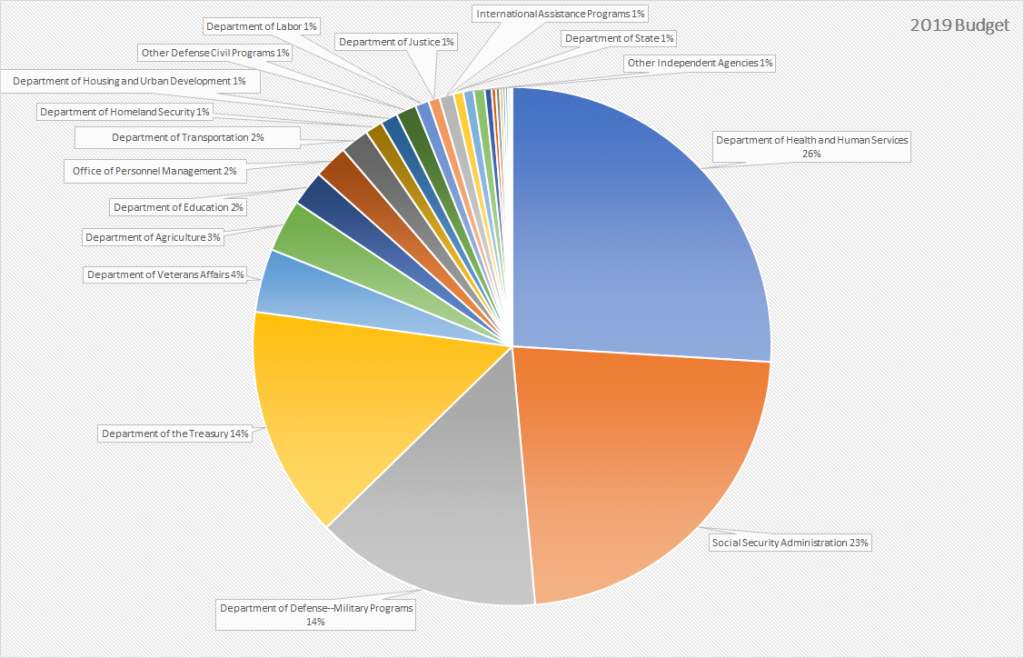 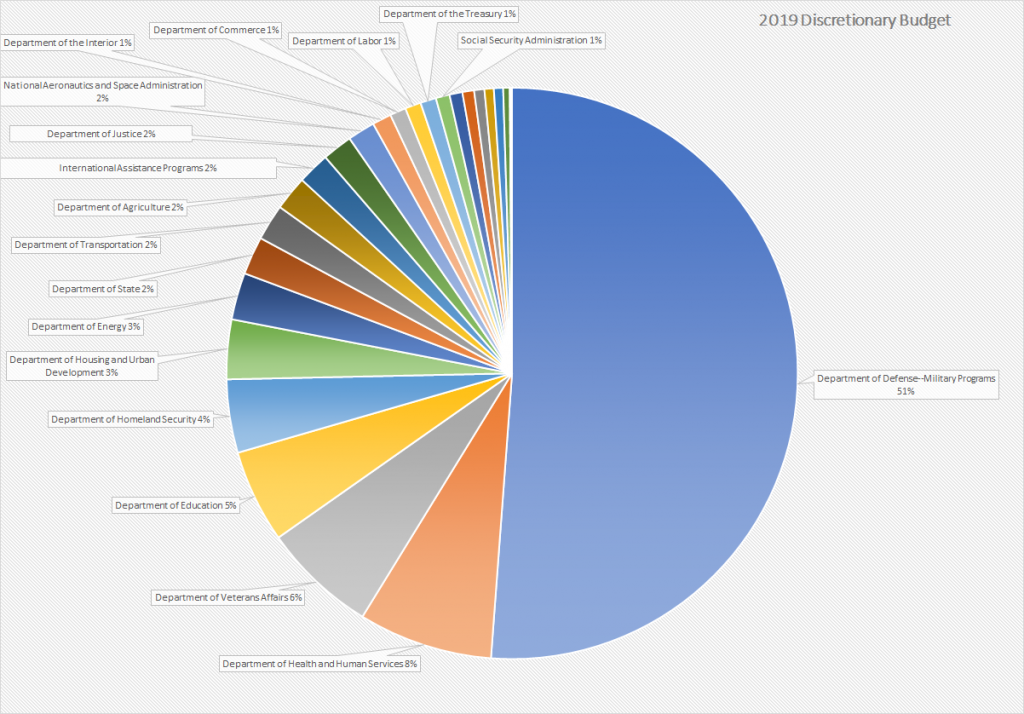 I always wanted to run for federal office on the platform of direct representation — more a technology than a platform. Develop a system that allows constituents to log in and vote for any legislation — basically like proxy voting for shareholders. I’d deliver summary and full text content of anything in advance of the vote, and I’d cast my vote as dictated by my constituents. And constituents could see the vote totals for each piece of legislation to prove that I am voting based on real input. Obviously, this platform suffers an immense privilege problem — it’s great for a demographic with free time to read through legislation and convenient Internet access. It also suffers a civic disengagement problem — does anyone actually want to read through the text of everything that’s coming up in my committees and to floor votes? It’s quite possible that I’d be voting against the National Law Enforcement Museum Commemorative Coin Act (H.R. 1865) because five people bothered to lodge an opinion … and only to troll the entire idea behind direct representation. And none of that considers the threat of malicious actors.

Once there is a platform available for one legislator, expending it to others in the same chamber is trivial. Adding the other chamber or state legislatures is an undertaking from a content-development standpoint (what *is* on schedule for the Oregon Senate today?), but the underlying development effort is the same. Somewhat like the National Popular Vote compact is an end-run around formalizing the eradication of the Electoral College, this would be an end-run around indirect representation.

But I’ve thought, of late, that starting at the Federal level is misguided — if for no other reason than the incredible amount of money it takes to run a campaign for federal office. But also because getting the six million or so Ohio voters set up for direct representation by their state Senator would be a logistical nightmare. It seems better to begin implementation at the local level — run for school board or a Township Trustee position where you are concerned about a few thousand voters. Use local offices as small proof-of-concept experiments. Maybe it doesn’t work out — maybe no one cares enough to check what’s being discussed and vote for their position. Maybe running and supporting the platform is too expensive or time consuming. Hell, maybe no one is interested enough in direct representation for a direct representation candidate to win in the first place.

The federal budget numbers for 2019 and 2020 are, of course, estimates … but it perplexes me how persistent the myth of the “tax and spend” Democrat and the “reduce government spending” Republican is. There’s no party shrinking the federal budget. Having a huge increase and then dropping back down to where you started isn’t much of a “decrease”. And outright increasing certainly isn’t a decrease.

If the difference is “tax and spend” and “just spend” … the fiscally conservative position should always be “don’t spend money you don’t have”.