Paul Ryan wants to talk about how his tax bill is going to help this mythical Cindy person. She was invented by the House Ways and Means Committee in a discussion of how awesome their tax bill will be for everyone. 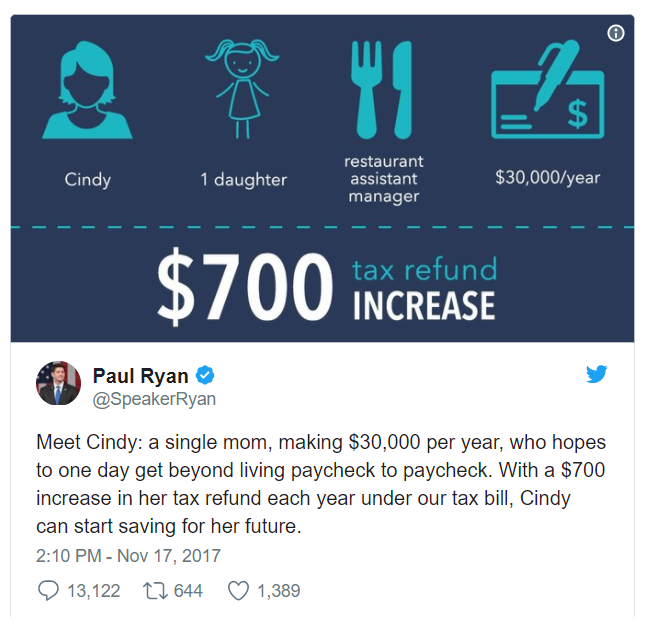 What if Cindy’s employer offers tuition reimbursement? Completing her degree is part of pursuing “her own professional aspirations”. Bummer! Tuition reimbursement is now taxed — so the 5250$ she is given to pay for University is now taxed, so the 711$ savings is now 186$ in tax savings. Still a savings, but not as impressive as the initial story. The budget also cuts moneys to local schools. Does the county reallocate funds from road repair to update text books? Cindy blows out a tire in an unrepaired pothole and that’s where her 186$ in savings goes. Maybe the school cut services instead. Great, she saves 186$ but at the expense of her kids education. Does the state just raise their income taxes? Does the county raise property taxes? Cindy doesn’t own her own home, but rent has to cover property tax expenses. Does her landlord lose money or does the landlord raise Cindy’s rent to cover the new local taxes? Cindy’s public library was going to build out a maker space where her kids could gain familiarity with 3D printing and robotics. Does the county raise taxes to fund the library, or do her kids miss out on this opportunity? Maybe she ends up saving a few hundred dollars a year in taxes, but losing beneficial services. Or maybe she ends up paying 300$ more in rent and is behind a hundred bucks a year.

The committee’s cherry picked scenarios aren’t exactly alternative facts, they’re real facts. But they conveniently omit the larger picture that is an individual’s budget. Not to mention hundreds of other real scenarios where an individual or business ends up paying more in federal taxes under this tax plan. Or, in Cindy’s case, saving money on federal taxes until the extra child tax credit expires and then paying more under the plan.

And none of their scenarios address the likelihood that Cindy will be working for many more years because this debt increasing fiasco of a tax plan will create a situation where we have to save money by enacting something like Ryan’s path to prosperity plan. Which ups the Medicare eligibility age, so individuals who could have retired under the current scheme now need to work just to retain medical benefits.

When government services are privatized, why are the functions not turned over to a not-for-profit company? The government provides services that shouldn’t be run for profit. Services that create a conflict of interest when profit is involved (the major component of my argument for single payer health care). The ideal scenario for the prison system is no “customers” — no one is breaking the law. That’s terrible for a company’s bottom line. To sustain profits, prisons need more prisoners … and retention, they need those prisoners to stay longer. There’s a civic disinterest in the conditions that lead to increased profits.

Hell, cut taxes in half and spin half the government into non-profits charities. Private contributions are tax deductible, and you just saved 5k on taxes … donate some of that to NASA, NEA, etc.