We had to rebuild a server over the weekend — it’s a lot harder to get Apache and PHP set up when you don’t have root access to just install things from the yum repository. And, unlike the servers where I built httpd and php from source … we basically relayed requests to the Unix admin to have packages installed. One of the confusions during the whole process was that we didn’t know what to use as the module name for PHP to load in the httpd.conf file. The line from our old server (LoadModule php5_module /etc/httpd/modules/libphp5.so) produced an error that there was no such thing to load.

When a library fails to load with some error, I know to use ldd … but I didn’t know there was a way to list out the modules in a library. Fortunately, one of my coworkers had already run nm and listed out the modules — nm -D –defined-only sharedLibraryFile | grep module — and we were able to identify that the libphp5.so that we had wasn’t anything like the one on the old server. By listing the modules for each of the shared object libraries installed by the php package, we got the proper module name for httpd.conf 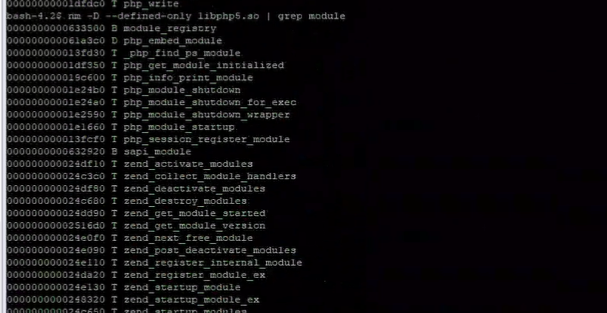