I’ve had an ongoing problem with the curbside grocery pickup — it’s a great time saver (and basically eliminates off-list purchasing / impulse shopping), and I get the limitations of asking someone else to think for you (I add a note that indicates the exact number of large/small *bunches* of bananas I actually want whilst ordering unit “1” banana, and I know they are not just going to figure it out and get jicama when they’re out of celery root). My problem is that the quality of the food that ends up in my order is absolutely not something I’d have bought. I won’t buy mushy, rotten oranges. Or visibly moldy strawberries. Or meat with huge chunks of fat. I’ve taken to putting in a big order of shelf-stable staples for pickup a few times a year and selecting the perishables myself. And accepting the time / quality trade-off when I ask them to select my produce for me.

Thought that was a problem unique to the grocery store, but we picked up chicken chow from Tractor Supply today. Last time, the 6 pound bag that was brought out instead of a 40 pound bag was really obvious. And quickly corrected. This time? We bought two bags of food — the first one was fine. Upon lifting the first bag out of the car, though, I discovered the second bag. A bag which looks like it was dragged across the warehouse floor and then taped up to retain whatever was left in the bag. This certainly isn’t a bag someone would have put into their cart at full price. I’ve seen other companies slap a discount sticker on a mostly full taped up bag. Unloading the ripped bag of something close to 40 pounds of chicken food, at full price, on a curbside pickup? Kinda sucky!

Luckily, Tractor Supply has excellent customer service policies. I used the ‘contact us’ form to tell them about the problem — and, yeah, I could have just brought it back to the store. But … had I been in the car park when I noticed the bag, I certainly would have asked for the bag to be swapped out. A couple extra minutes was worth it to avoid whatever contaminants got into the bag and whatever amount of food fell out of the bag. Half an hour of driving? Not worth it for what’s probably some warehouse dirt and maybe a pound of missing food. Within a few hours, a customer service rep rang be to apologize for the mangled bag. He refunded the purchase price and issued a gift card for our inconvenience. That’s more than fair. 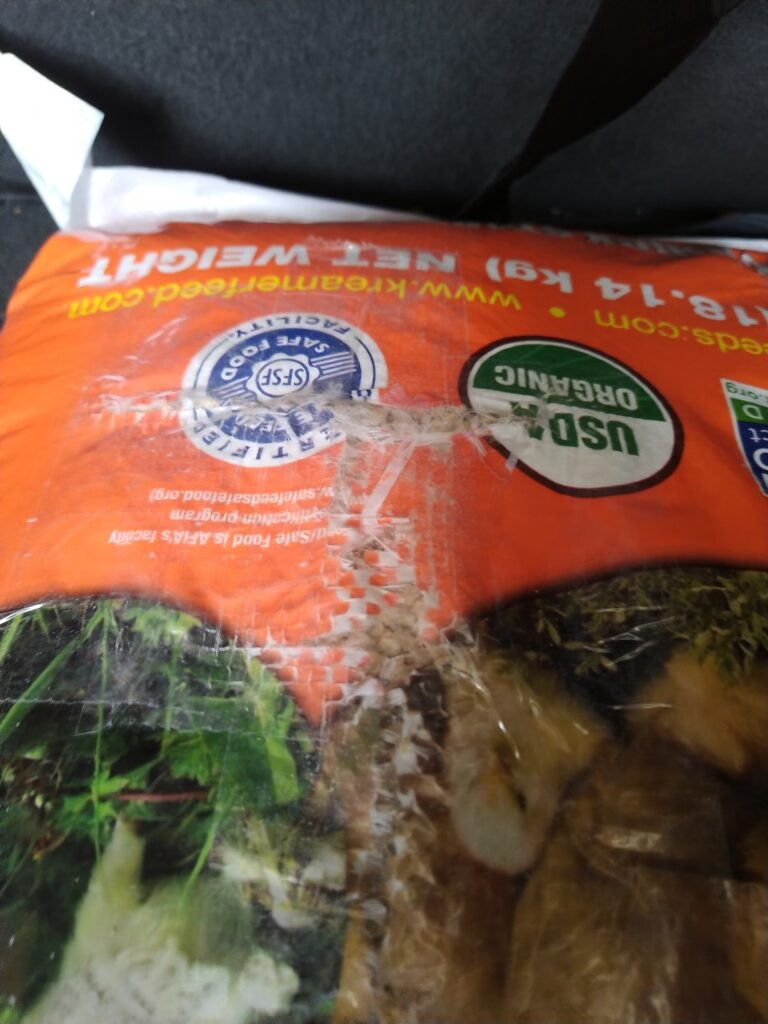 We ordered a chest freezer from Home Depot a few weeks ago with delivery expected a few days ago. That date moved out to Friday — no big deal. Prior to placing the order, we chatted with their customer service to verify that home delivery actually meant delivery into the house because there are all sorts of places that are considered “delivered”. And it would suck to get a big chest freezer at the bottom of our driveway and have the company call it delivered. We confirmed, multiple times, that the home delivery service would be able to navigate our narrow driveway and that the item would be delivered into the room of our choosing.

And then the delivery company called today. They only have a 26-foot box truck, so they will deliver the freezer to the bottom of our driveway. Several frustrating calls to Home Depot later — we were hung up on by a very rude agent who just kept telling us that the delivery company is a third party so there’s nothing Home Depot can do about it. And that “delivery” is only to the doorstep. This agent hung up on us. We finally got someone slightly helpful — delivery still means doorstep, and if the third party delivery service only has a 26-foot truck that’s what they have … but this rep was at least pleasant and willing to finish the conversation.

What really bothers me, though, is no one at Home Depot’s customer service seemed interested in knowing that the online chat folks are absolutely telling customers that “home delivery” means into the room of your choosing. Depending on one’s home, this could be a very big difference — like our case where the delivery service wants to leave the box a couple hundred feet down at the bottom of the driveway. We offered to send them the names and chat sessions to ensure agents are getting appropriate training, but nothing. We have, on three separate occasions and speaking with three different agents, been informed that the “home delivery” service means the appliance will be delivered into the room of my choosing — and warned that multiple flights of stairs would be an extra charge.

A 3D printer filament manufacturer, MakerGeeks, has been running a series of awesome deals since Black Friday. We placed an order for several of their their “grab bag” packages – which I assume to be production overruns and whatever isn’t selling. We want to make a few large prototypes – if it’s an amalgamation of oddball colours … whatever, it’ll still be functional. We can pay extra to select the colour once we’ve got a finished model file.

A few hours after placing my order, I got a mass e-mail saying essentially “we sold a lot more stuff than we expected, it’s gonna take a while to ship”. Wasn’t buying Christmas presents, so waiting a while … whatever. Two weeks later, I haven’t heard a thing from them. Odd. I sent a quick e-mail asking for someone to verify that my order didn’t get lost or something. And never heard back from them. Waited another week and sent a follow-up.

Checked them out on the BBB site and found out they’ve got a really bad reputation for non-existent customer service And not shipping ‘stuff’. Sent an e-mail to all of the contacts listed on the BBB site (the phone number is unanswered and rolls to a generic message). Another week with no response, and I filed a BBB complaint mostly to increase the number of people saying “these people don’t bother answering e-mail and suck at order fulfillment”.

Additional irony – I’d subscribed to their newsletter when we placed our order. The five weeks of no communication from the company did include an almost daily e-mail with information on their holiday promotion. So they’re not bothering to ship my stuff, but they’re actively soliciting new orders!?!

What bothers me, though, is that a simple automated job would be the difference between initiating a charge-back and waiting for my order to ship. There’s an order database somewhere. Pull a list of all open orders & send a message that says increasingly comforting versions of “we haven’t forgotten about you, we just haven’t gotten to you yet”. If it were me, I’d probably include something like “We currently have outstanding orders for 25,839 KG of filament that we’re working through. The machines are running as fast as they can, and we’re shipping 2,848 KG a day. We want to thank you for your patience as we work through this amazing volume of holiday orders.”. Actual message content is almost irrelevant. The point is a few dozen development hours would be saving orders and improving the company’s reputation.

Instead I get nothing. With no faith that the company will ship me anything ever … and since I don’t want to try disputing a charge six months after it was made (had problems with that before – prepaid a CSA membership through PayPal, waited eight months for the new cycle to start, but I wasn’t on their list and they claimed to have no record of my payment. Tried to dispute it through PayPal and was told the window to dispute the charge was up … but I didn’t know I wasn’t going to be part of the new year until the first delivery!), I presented my communication and their complete lack of response to the credit card company. About 24 hours later, the charge-back was completed.