We checked on the bees around noon today. We’ve seen a lot of activity at the hive, and they seem to love the field of clover in our yard — so we were curious to see how much the colony had built up. It wasn’t as full as we were hoping (we would have loved to add a super!). There were more bees in the upper deep than last time, but the hive box wasn’t super full. Maybe five frames with brood, several frames with honey, and a few frames that they’d started drawing out. We moved the frames around — the brood frames were all clustered together, so we moved (2?) frames up to the top deep and interspersed empty and half-empty frames with the full ones. Hopefully having empty frames in the middle will encourage them to build out the frames.

A little after 1PM today, we inspected our beehive. Scott set appointments to remind us to inspect the bees on Sunday afternoon every week for the first few weeks. I filled the second frame feeder with a gallon of 1:1 sugar water. Figured it would be quicker and easier to swap feeders rather than try refilling the feeder outside.

We opened the hive — there aren’t as many bees on the top entrance board now that the hive has a larger entrance, but they did build some burr comb between the frames and the top board. Scott scraped off the burr comb, and Anya held onto it. There were a lot of bees across six of the frames. The bees have started working on the north-most two frames, so they were ready for the second deep hive body.

We removed one of the frames from the lower hive body — looking at the frame, we saw both capped brood and larvae. That’s great — we know the queen is laying! I found a cool picture of the bee lifecycle that made me think we wouldn’t see any capped larva yet (we released the queen 8 days ago … and “capped” shows up on day 9.

They are collecting pollen (we saw some pollen on the bottom board) and nectar (there’s already capped honey as well as cells with not-yet-finished honey). The frame was placed into the new deep to encourage the bees to move up into the new box. We removed the empty feeder, replaced it with the filled feeder, and placed one new frame into the lower hive body so it has eight frames plus the feeder.

We then put the new deep on top of the hive — it has the one frame we pulled from the hive plus nine clean, new frames. There’s a little gap between the two hive bodies that shrinks up when weight is put on the top. We put the top entrance board on the deep, set the lid in place, and placed a large cinder block on top of it all.

We checked on our bees this afternoon — it was a nice, hot day (low 80’s!). We turned the entrance reducer to give them more space to come and go. I frequently saw bee traffic jams! We removed the queen cage and some burr comb the bees had built up between the two frames where the queen cage was placed. I’d given them a gallon of sugar water when we installed the package, and there’s a bit left. But they’ve consumed a lot of the syrup. We’ll have to refill their food when it warms up again next week.

I’d ordered a package of bees this year (we’ve got frames from last year that will give them a good head start), but the post office seemed to have lost them. They left Kentucky over the weekend and went into “umm … the package is on its way to the destination. Check back later” status. But, at about 6:30 this morning, the post office rang me up to let me know they had bees for me. I picked up the package and set them in the butler pantry (a nice, dark, quiet place!) and we put the bees in their hive at about 3PM. 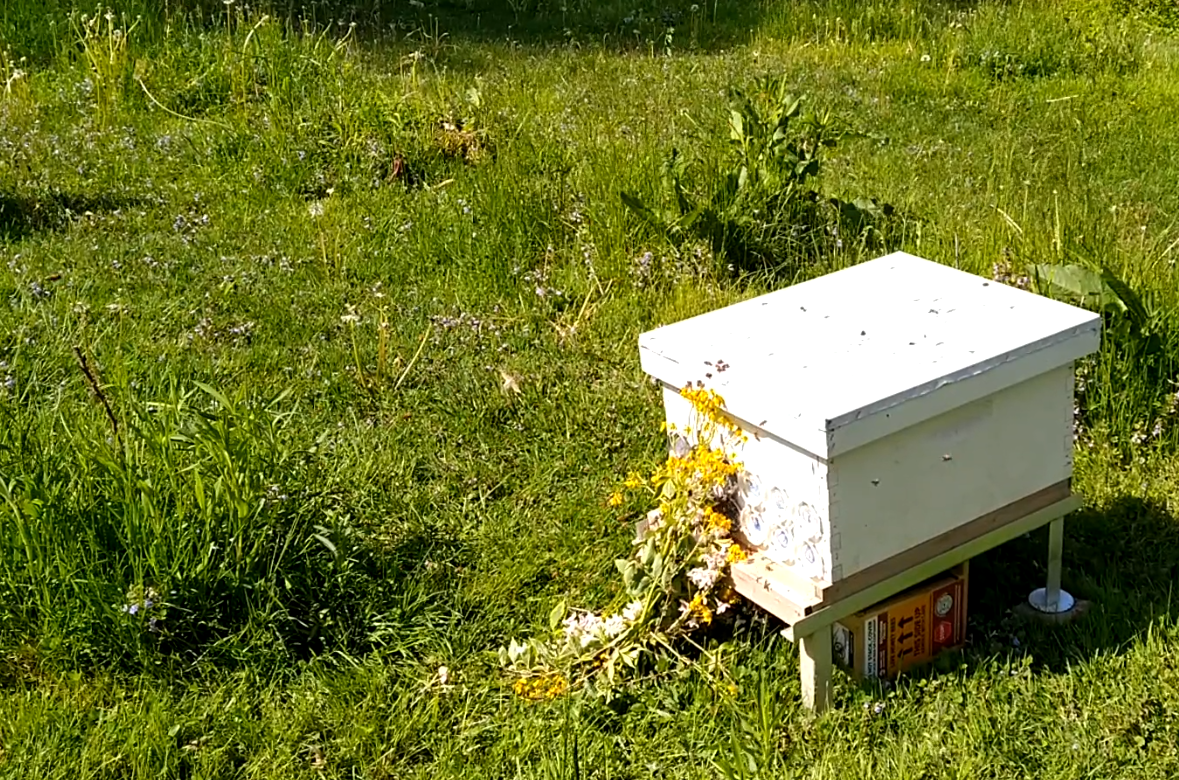 Our bees have been invaded by hornets — I don’t think we’ll have a hive much longer, but we spent the day blasting hornets with soapy water trying to protect the hive. A few of the honey bees came over to snuggle with us. It was a really cool experience, holding the little honey bees right on our fingers and letting them perch on our shoulders like really silly pirate parrots. 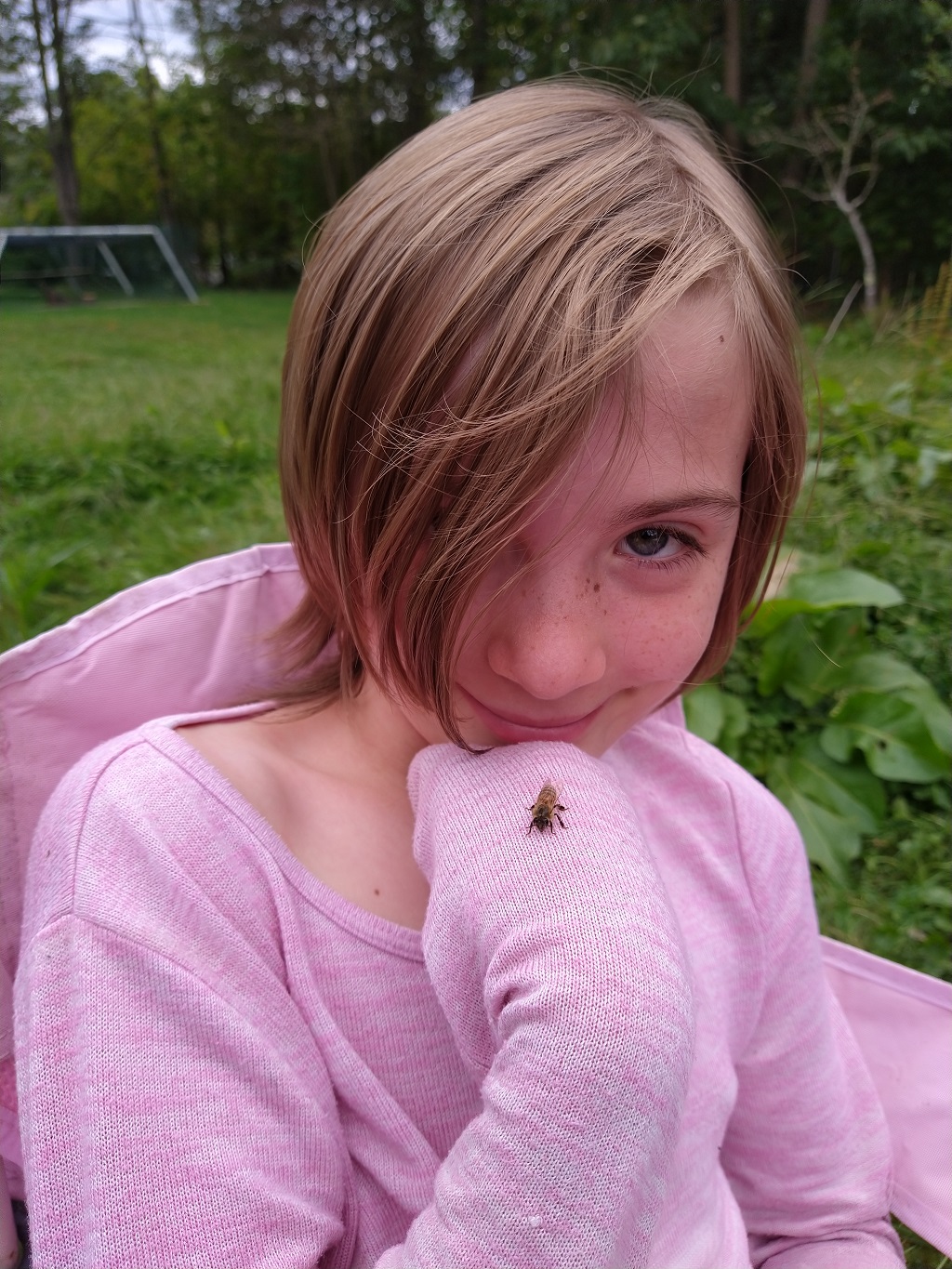 We got our nucs installed into their new homes — we were worried that there wouldn’t be any bees in the one hive because it was so quiet. But both nucs were full of bees doing all sorts of bee things. 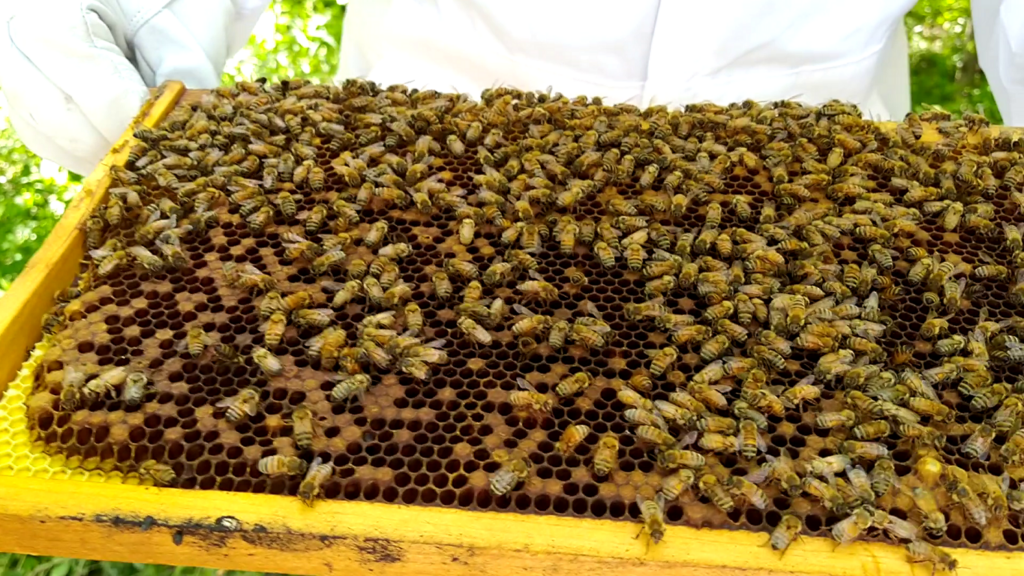 In one of the colonies, we found a marked queen. 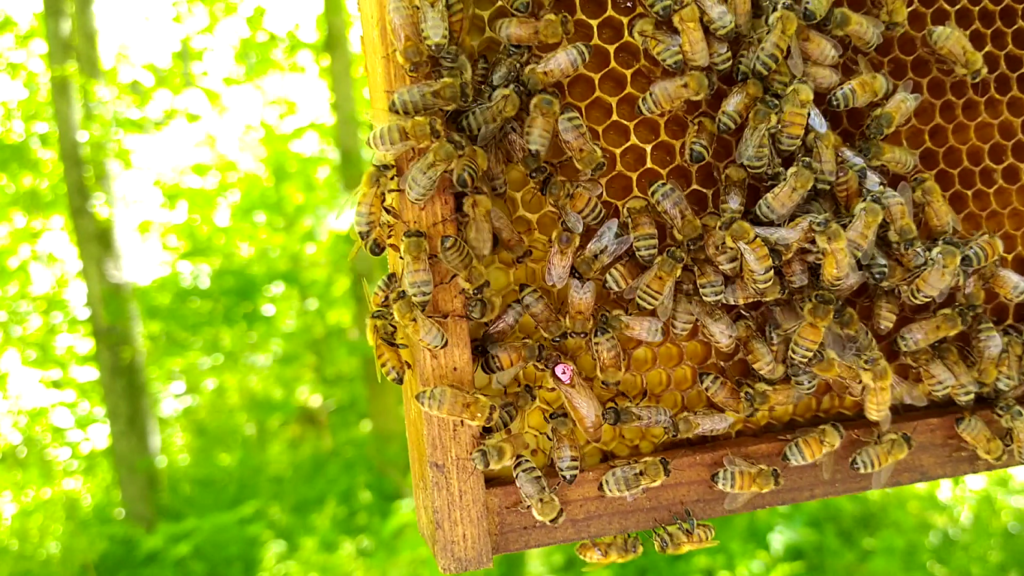 One of our chickens, Soaring Eagle, manages to escape the chicken tractor rather frequently. Even when I’ve locked it down — Anya doesn’t get the door closed up well, and I know exactly how they escape … but I’ve got that thing locked down. And, still, there’s a chicken in the yard. Because she’s a magic chicken.

We drove out to pick up our bees on Saturday. Scott was apprehensive about them because, well, it’s a big box full of bees. The guy was in the middle of explaining how the box is all sealed up and maybe a bee or two might escape, but they’d buzz around the back window as we drove and it’d all be fine. Except we started noticing a stream of bees coming out of the nuc. We, it seems, have magic bees too. The bee guy put bags around our nucs so we wouldn’t have a hundred bees buzzing around the car as we drove. That turned out to be a really good thing. The one nuc had a handful of bees in the bag. The one we’d noticed the bees coming out of? It most certainly did have a couple hundred bees outside of the box. I carried this box to the back of our property. Getting the bag off was a bit of a challenge even in a bee suit. They weren’t super thrilled about the relocation process. But they’re happily settled now. 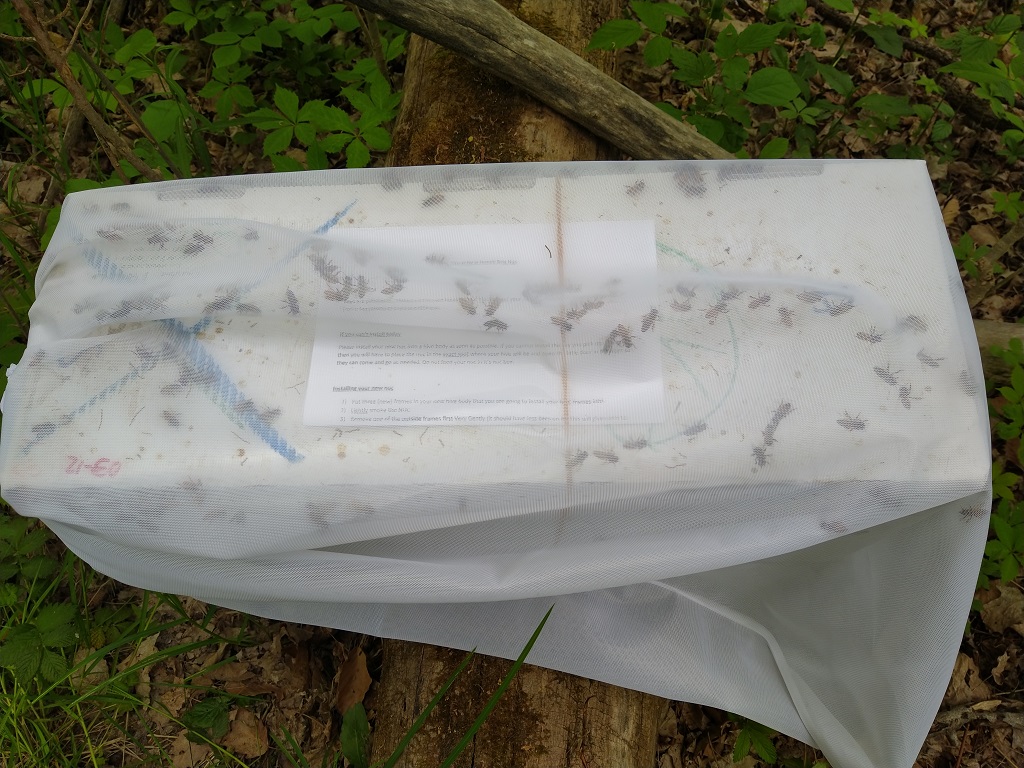