We got a desuperheater with our geothermal system. I was really excited for summer, expecting our electrical usage for heating water to drop dramatically. We even hooked up the Aeon Labs energy meters so we’d have numbers to show how much we were saving. Aaaand … we saved nothing. Usage actually went up between the non-HVAC period and the air conditioning season (more work outside, more getting muddy, more showers?). Super hot couple of days in early summer … nothing. I was really disappointed in the desuperheater. It wasn’t expensive or anything, but I thought it would do SOMETHING!

In mid-January, Scott replaced the sink faucet and noticed another plumbing problem. He threw the circuit breaker to the water heater to remind him to look into that other problem once the faucet was installed. A few weeks later, we heard an odd noise … I was walking around trying to isolate the source, and noticed the display on the water heater was off. Kind of worried that the odd noise was the water heater … I told him the display was off. And he remembered throwing the breaker a few weeks ago. Odd, since we’ve been doing silly things like showering in hot water and washing dishes. Haven’t noticed any hot water shortages.

Oooooh, the desuperheater was keeping the water hot. During the 50 degree days, but during the 5 degree days as well!?! When it didn’t manage to heat the water in summer?!? Turns out the desuperheater doesn’t do much if it’s cutoff if close to your water temperature set-point. We set the water heater to its lowest setting – hopefully we see reduced electrical draw. If not, I will probably get the “smart” control panel and write something to put it into vacation mode & only turn into “heat the water” mode when the temp drops significantly during a part of the day when we’re apt to want hot water (i.e. let the desuperheater do its thing if the water temp goes low at 3AM).

Looking at our power usage data, where the slope of the line is the rate of power consumption, there was a change in usage going into winter (odd, since the design is such that summer should have been the noticeable reduction). The slow becomes near horizontal now that there is a significant difference between the water heater’s set point and the desuperheater’s cutoff point. 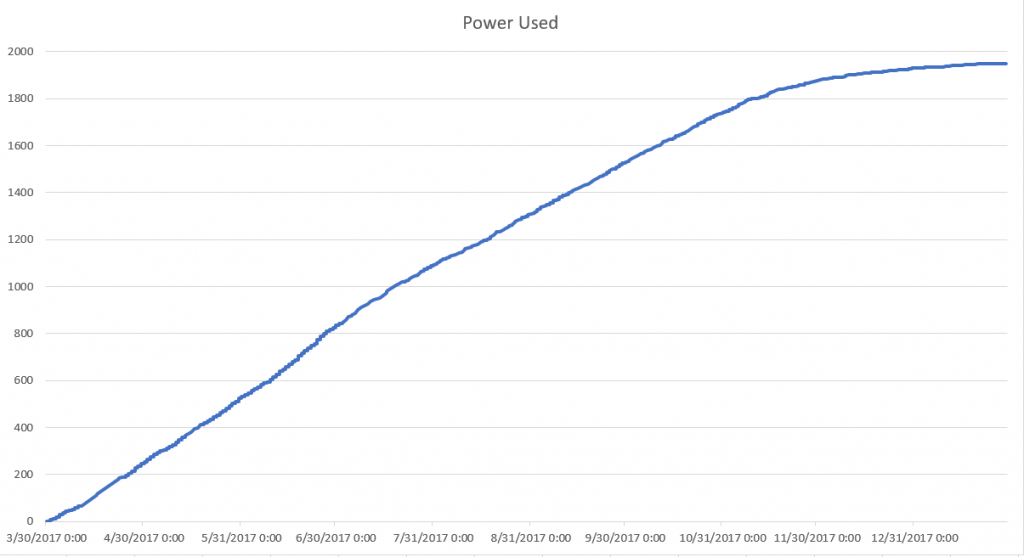 Or a more telling chart – the red lines indicate times where the water heater was drawing power. It hasn’t cycled on for weeks even on 20 degree days.

We’ve now been using our WaterFurnace geothermal system for a few months. This winter has been an odd combination of fifteen degree highs and seventy degree highs (yes, we went to the beach and played in the sand in February), but we’re starting to see significant energy savings v/s the Trane XV20i air exchange heat pump. Not only are we seeing lower electrical usage, but we keep the house at 72 degrees this year — almost too warm on occasion. With the air exchange heat pump, we were layering up, keeping the house at 68, and still feeling cold.

Energy use by the heat strips was my biggest concern with the system — that we’d still see the heat strips engaged in the middle of winter. Glad to report auxiliary heating system was not engaged since the earth loop was installed (December 2016, before the earth loop was hooked up, we used emergency mode to provide some heat from the coils – supplementing wood burned in our fireplace).

Our HVAC-related energy costs for the first three months of usage: 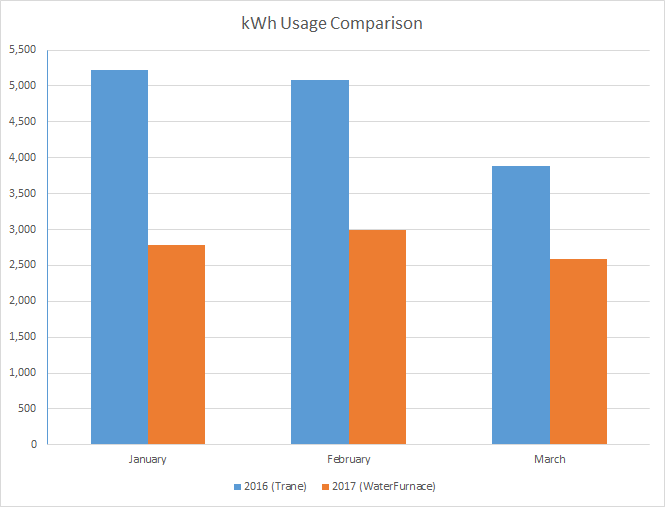 Our septic aerator used slightly less electricity than our HVAC did in March! As the temperatures warm up, I’m sure we’ll reach a point where the aerator is our high draw item (i.e. the thing that gets replaced next). We’re going to use our AeonLabs HEMs and some smart outlets that report energy usage to isolate other high-draw items and see what can be eliminated or upgraded … but we’ve certainly made progress in purchasing the geothermal system.

I’m getting code together to scrape the Symphony data into OpenHAB. In the interim, we’re watching the stats from the WaterFurnace Symphony web site. We’re running between 1,800 watts and 2,800 Watts to keep the house really warm (72 degrees at the thermostat) with outdoor temps in the 20’s. The loop temperature has stayed pretty consistent as well. It’s not cheap, per se, to heat 4k square feet; but this is a lot better than the power usage with the air exchange heat pump at similar temperatures.

We’ve got a functioning geothermal HVAC system running! They finished up the piping from the exterior wall to the furnace. 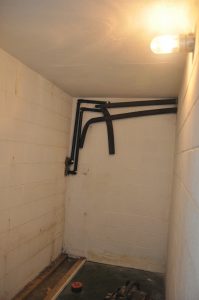 I was rather excited to see the containers of methanol — filling the tubes is the last step before bringing the system online. I like a nice fire … but it’s a cold way to heat your house. 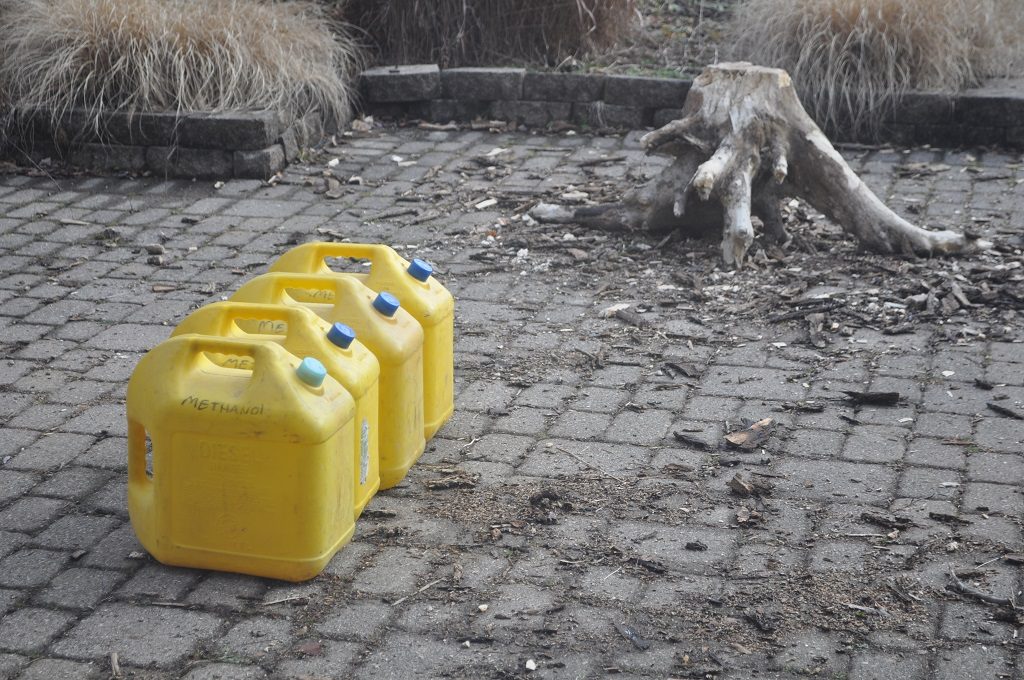 The loop filling contraption – hooks up to the domestic water supply, mixes the methanol, and pumps it into the loop field. Over a hundred gallons – since we know the diameter (3/4″ in the loopfield, 1.5″ to the house) and the length (8x 200′) … we’ll calculate the volume of the cylinder some day. But for now … we’re got HEAT!!! 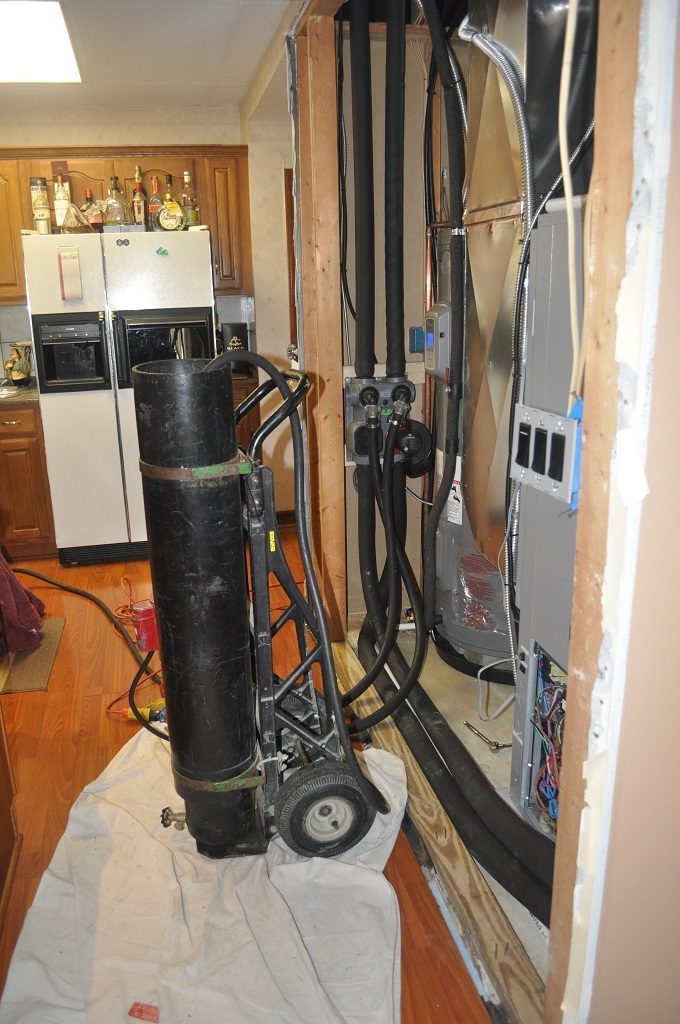 There are a LOT of tubes coming into our pit – and Anya is really going to miss the construction equipment when it’s gone. 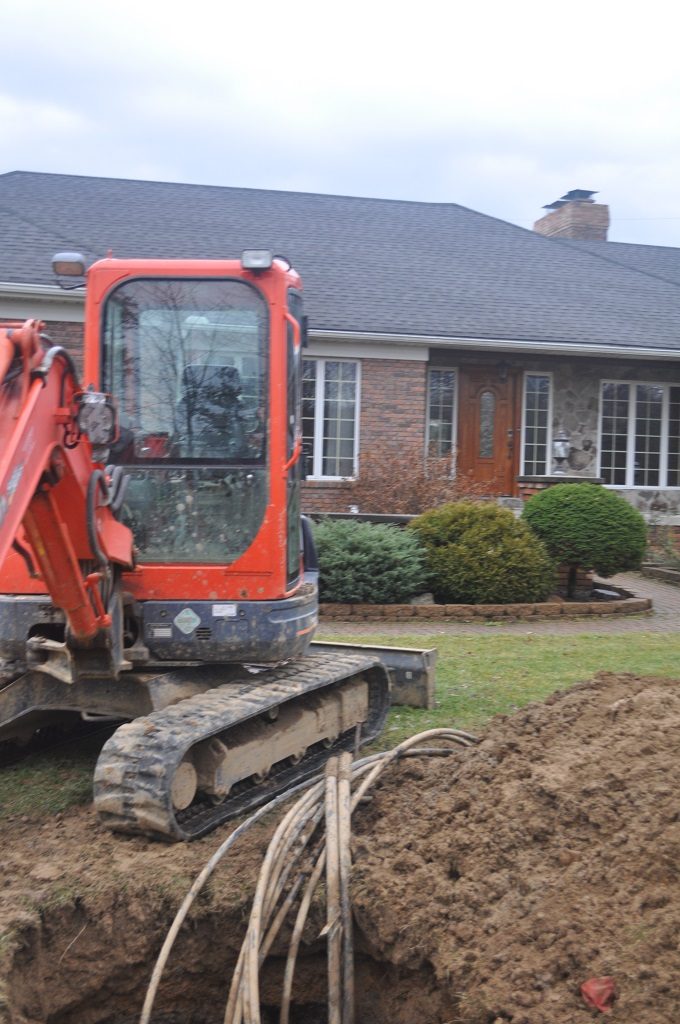 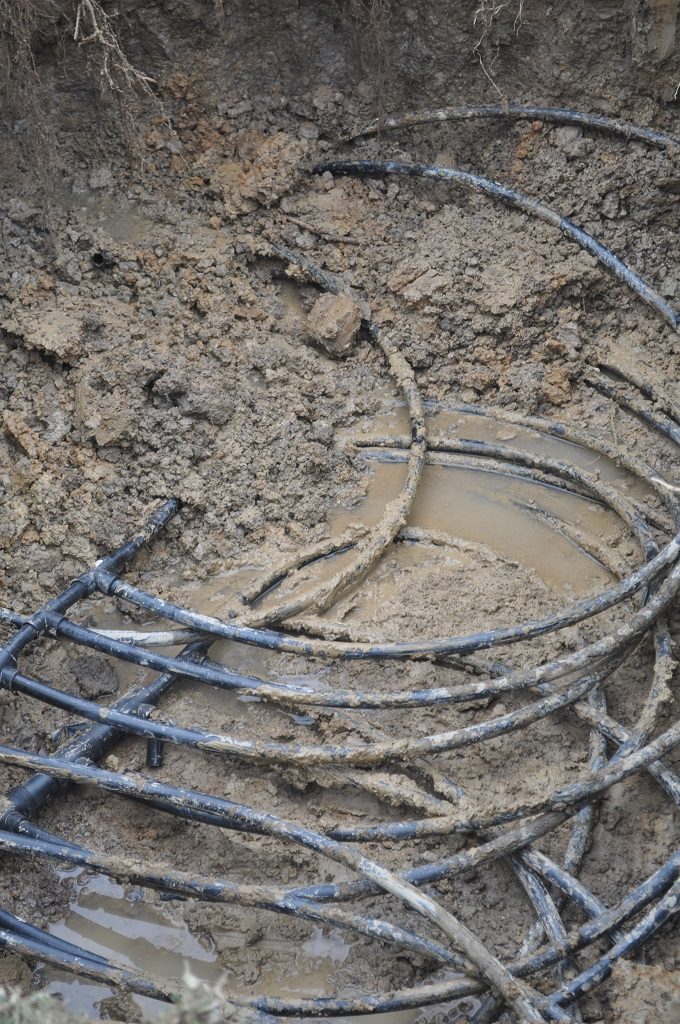 Still drilling … it’s really cool to watch. Especially from the dining room window where we get a good view and stay somewhat warm 🙂 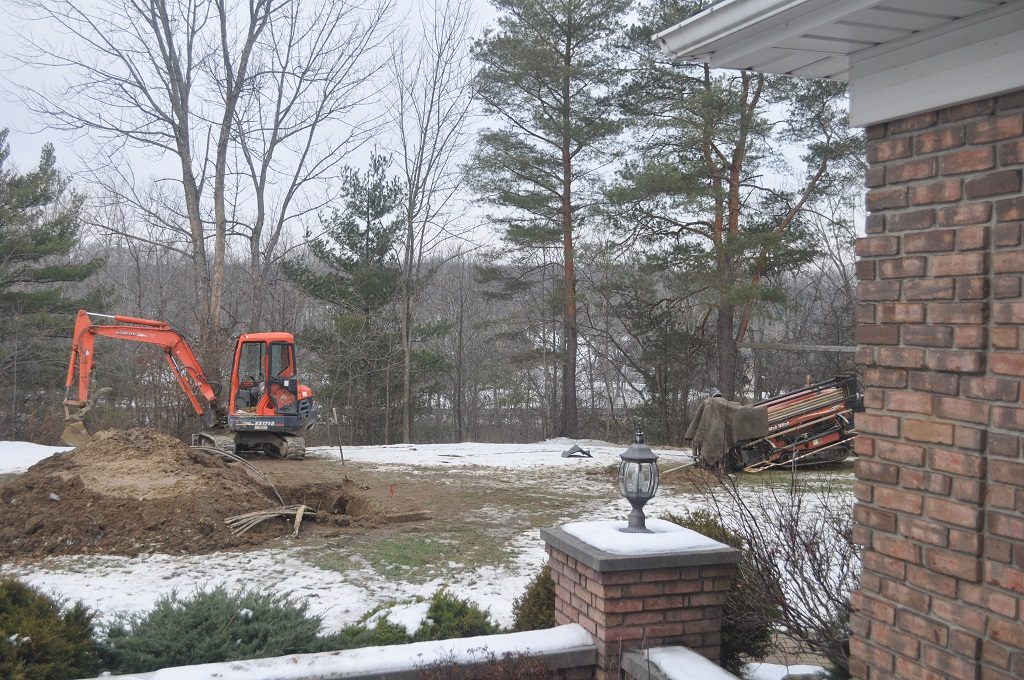 There’s a hole in the ground (and a big pile of dirt). They dig a pit into which all of the tubes are manifolded & a line is run from the pit into the house. They’re about to start drilling – that’ll take a while. Especially since temperatures the rest of this week aren’t good for people or machines. 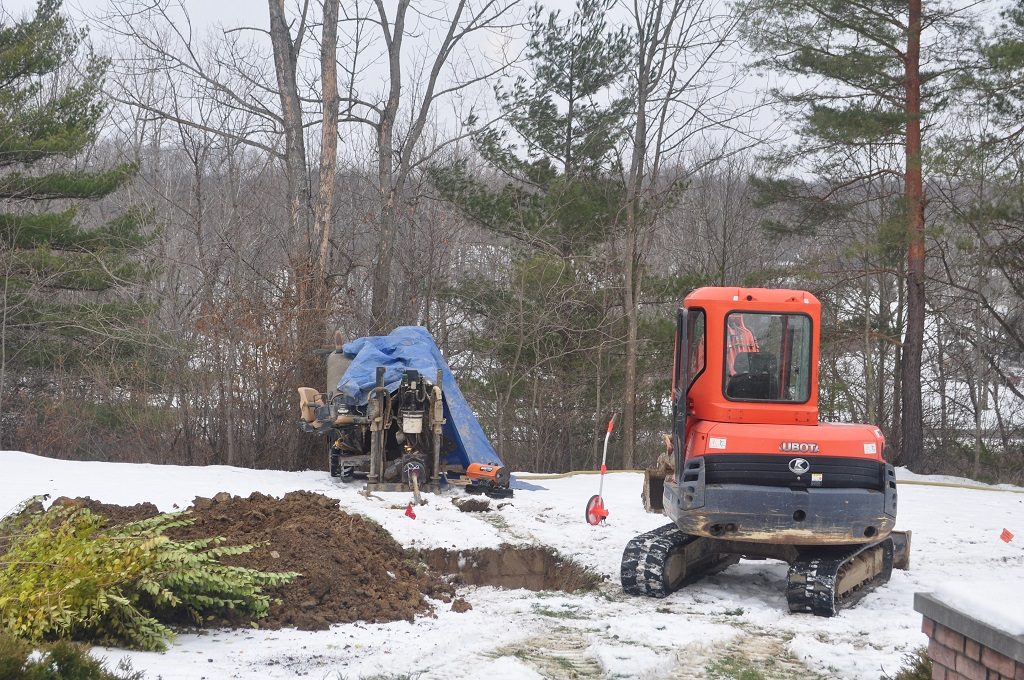 We have construction equipment! They just finished up with the previous job, and the equipment has been delivered to our property. 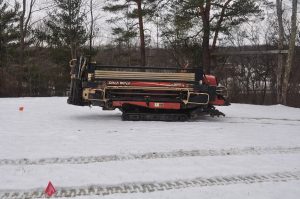 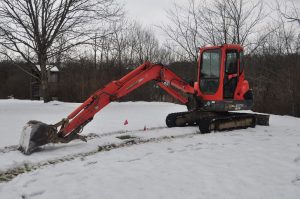 The geothermal system — WaterFurnace Series 7 — is installed in our house. There’s a pump mounted to the wall, but nothing is plumbed together because the loop field has not yet been installed. That’s what this equipment is for – they are going to dig a big hole in the yard (maybe 8 foot by 4 foot). A whole bunch of 3/4″ tubes will run into this hold & connect to a manifold. There’s another hole dug next to the house, and 1.5″ tube will go from the manifold to the exterior wall, through the exterior wall, through the pantry, and into the furnace room to attach to the pump.

This heat will be used to heat the house … and as long as the loop field temperature stays fairly reasonable (upper 30’s, I think), we should be able to sustain a comfortable temperature without engaging the heat strips. We’ve talked to quite a few people who use new-ish geothermal units that have only used the heat strips in extreme temperatures (it was -20 for a week a few years back) or when they increase the thermostat by more than two or three degrees. If you lower the house temperature to go away on holiday, don’t set the thermostat back to normal immediately upon returning home. Slowly increase the set-point by a degree or two every few hours a day before you plan to return – by slowly increasing the temperature, you’ll avoid using the heat strips.

We have heat! Well, we’ve had heat – when we were house shopping, fireplaces were a big thing to some people. Kind of a ‘whatever’ to me – not like I’d refuse to consider a house because of a fireplace, but I didn’t care if there was no fireplace either. The house we purchased has this Lopi Freedom Bay wood burning insert. More of a curiosity to me when we were house shopping, but it’s allowed us to make non-hasty decisions about HVAC equipment twice now. We got a super high end (and super expensive) air exchange heat pump in November of last year. It didn’t work well for us — 20kW of heat strips kicking in for a few months gets expensive. The service from the company that installed it, however, was right abysmal. Things we reported in November of 2015 were still unresolved during the summer of 2016. And, yeah, we could have been ringing them every day to force some action … but few of the issues were worth that level of effort. The thermostat software locks & the system is in the state is was at lockup (i.e. you wake up shivering in mid-summer because the AC has been running full-blast for hours). It reboots and works for another month or two. The air handler leaked. Until they patched it and our lower level got ten degrees warmer, I didn’t realize how MUCH it leaked. The list goes on. We’d bother them every month or two, sometimes get some action and sometimes not. The installer, though, had a one year 100% satisfaction guarantee. Without a bunch of fine print or conditions. Which, really, is why I was OK getting an air exchange heat pump from them.

On several levels, we were not satisfied. The company tried adding some conditions to their written guarantee after-the-fact, but they eventually relented and removed the system from our house and refunded the full contract price. They were not, however, able to restore us to the original condition … not that I wanted an old gas Trane with a cracked heat exchanger … but the circuit breakers and copper wire they pulled would have been nice. They were willing to leave the NEW circuit breakers and wiring in for the > 900$ line item from their bill. But, seriously, 200$ of stuff from Home Depot is not something for which I’m keen on paying near a grand.

Initially, I wasn’t sure how much more a geothermal system would cost … until we got some quotes and discovered that we could get a fully variable geothermal system for 500$ less than we payed for the air exchange heat pump. WOW! The configuration we chose ended up being 100$ more – we added an additional 200′ bore. Because it is going to take about three weeks before the drilling can commence, they installed the HVAC equipment without connecting it to the earth loops & set it up to run in emergency heat mode — which is essentially a really expensive 20kW electric heater. But it keeps us from freezing when the fire goes out overnight 🙂