We’ve had a horrible time using the DigiBoil we ordered some four or five months ago. The temperature is way off. The manufacturer says there’s no calibration on the unit — and, if we want to be able to calibrate the unit, we should pay the money for a Brewzilla. A quote from their latest e-mail:

“The Digiboil is primarily designed (and marketed) for other purposes – we sell a great many for use with stills or as HLTs, typically. To that end, the granularity of temperature control of the Brewzilla is not typically needed for the Digiboil.”

In my opinion, that’s a little disingenuous. We ordered a DigiMash — a package to turn the DigiBoil into an all-in-one electric brewing system.

We were considering the iteration with a pump included

I’d totally believe it was originally designed as a HLT, accessories packages were put together to make it a brewing system but those accessories were discontinued because the thing doesn’t work well enough to be a brewing system. But my opinion is that it was certainly was marketed as something fully functional. And the extra couple hundred bucks for the Brewzilla got you more advanced features like step mashing.

The strangest thing is that the problem seems to be the controller — building up a NodeMCU-based controller would make something better than a Brewzilla (you can flash your own firmware if you want the logic to change — we got put off the Brewzilla because v3.1.1 units weren’t available in the US when we were looking to purchase something. The v3.1 logic started the timer when the elements kicked in. You’d have to buy an upgraded 3.1.1 board to get the new logic that starts the timer when the target temp is reached (and sixty minutes at 155 isn’t the same as sixty minutes spent going from 135 to 155 then holding at 155).

Our beer-brewing equipment arrived today! The packaging was not robust — every box had some fairly substantial damage. There’s a dent inside the kettle and one of the fermenters has a pushed in section (supposedly this will pop right out when we fill it). My first surprise was that we got a DigiBoil in a box and the mash upgrade kit in another box. The kettle is even branded as DigiBoil. Which … from a manufacturing / material standpoint makes sense. Why would they have two different sets of packaging and product labels? And three different SKU’s — DigiBoil, DigiMash kit, DigiBoil Mash Upgrade. It was a better deal buying the DigiBoil package — the DigiMash 65L was $259.99 and the mash upgrade $89.99, so we saved ten bucks ordering 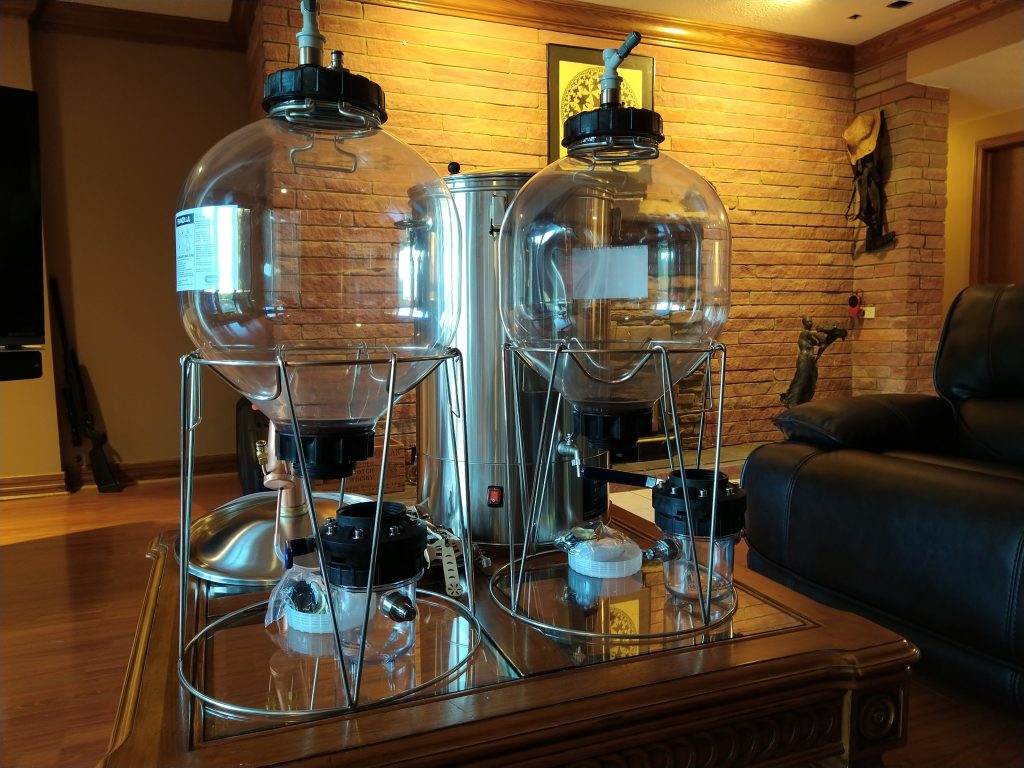 We saw a DigiBoil at the local homebrew shop when we stopped by to pick up yeast. Scott had been pricing out a three-kettle system with pumps (along with some sort of table) and it wasn’t cheap. The DigiBoil was about 200 bucks. I took a quick picture of it to research later. Quickly discounted it as an option because it’s just a big pot with electric elements to boil water. We needed something for mashing too.

At which point we decided to shop around and see what other options were available. There’s the Grainfather — super expensive and, if I wanted to walk away while it cooked, I’d want to go farther than Bluetooth range. We came across Brewzilla — the software controls of a Grainfather minus connectivity, but 650 bucks is a lot more reasonable for a 65L brewing platform. Unfortunately, the 3.1 version starts the timer when the elements kick in to reach that temperature. Version 3.1.1 systems change this logic so the timer starts once the temperature is reached. The control board can be swapped out, but I really don’t want to blow fifty bucks upgrading something I bought this week. And, while there were some 65L 3.1.1 Brewzilla’s hit the US at the start of 2020, suppliers are all awaiting delivery “late summer 2020”, “late September 2020”, or “Autumn 2020” … which I took to mean “we don’t know when”. Understandable, but pretty much put the Brewzilla out of the running.

In looking at the Brewzilla, I found a mash upgrade kit for the DigiBoil. And a kit which includes both the mash upgrade and DigiBoil called a DigiMash. Both a 120V and a 240V 35L DigiMash are available, as well as a 240V 65L system. At around 240 bucks for the 240V 35L system, it’s a great deal compared to a three-kettle system. Because we frequently do double batches and potentially recipes with larger grainbills, the 18 pound capacity was limiting. At 340 bucks for the 65L DigiMash, it sounded like a great deal. No re-circulation pump, but it’s easy enough to hook a pump up to the output valve. Brewzilla has a port in the bottom of the vessel that goes down to a pump under the unit — a short silicone tube connects to the pot and another short silicone tube that connects to the metal fitting through the side-wall of the vessel. On the video we found, that tube was pretty cruddy looking … which isn’t exactly a selling point.

DigiMash doesn’t have the software-control of Brewzilla — you can set a 158F mash temp and come back and hour later, but you cannot perform step mashing. Which … not something we’ve done. And, really, you could. You’d just have to change the temps manually. It sounds like an interesting experiment to put together an ESP12e and a few relays to control the elements. Potentially, we could turn the DigiMash into an open source customizable controllable (and WiFi connected) brewing system.