Skip to content
Microsoft is adjusting some non-core features to save capacity while the number of remote workers increased dramatically. This won’t impact core services (signing on, viewing/sending messages, uploading/downloading files), but don’t be concerned if you’re getting replies where the person seemingly didn’t type, presence updates seem slow, avatars aren’t showing up next to someone’s name (or yours in the upper right-hand corner of Teams), etc. 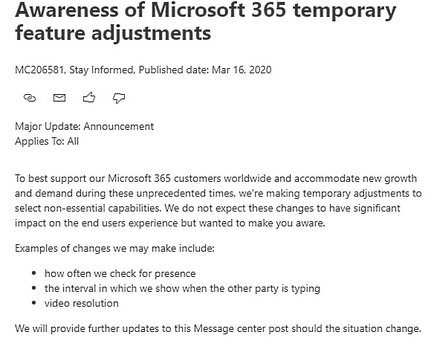 In addition to a Science Experiments For Covid19 Break, lots of e-books from the local libraries, the free learn-at-home program from Scholastic, and a handful of new physical books, I’ve got four daily educational activities for Anya during this school not-a-break:

“School superintendents, sports commissioners, college presidents, governors and business owners have taken it upon themselves to shut down much of American life without clear guidance from the president.“
Reading this, I cannot help but think the response to this pandemic is playing out according to a fundamental tenant of Republican philosophy. Push power down closer to ‘the people’. Each school district, city/township, county, and state gets to decide how to respond to this virus. In other words, it’s a feature not a bug.
Personally, I think it’s important to have a strong federal government to coordinate things that impact everyone — environmental regulations, educational concerns, energy efficiency, public health. I hope people who push for decentralized government think about how chaotic our response is and extrapolate to how their preferred form of governance can react to other important situations, whatever those may be.

I’ve had several situations now where a group is looking to start an online video meeting. To eliminate platforms that don’t support the number of people required, I put together this quick list. Teams and Zoom are, unfortunately, something home users are less apt to be familiar with … but it really is “click to join the call” easy.

Hangout Meet has a 250 person limit, but only if it is part of the gSuite subscription. It’s not part of our school district’s education package. Not sure if it’s part of our Township’s government package. Update: Google is now offering paid Hangout Meet features for free through 01 June.

Interesting combination of data — there have been 13,624 tests (although the data points for the past few days is currently incomplete) and 1,663 infections. That means like 87% of the people who have been tested weren’t infected. Which could be that they’ve been tested before they are infected enough, or it could be that there are a LOT of uninfected people getting tested. Since the actual number of tests is going to be higher, the percent actually infected is lower.

Striking how the states where Biden is leading count so much quicker than the ones where Bernie is leading .. 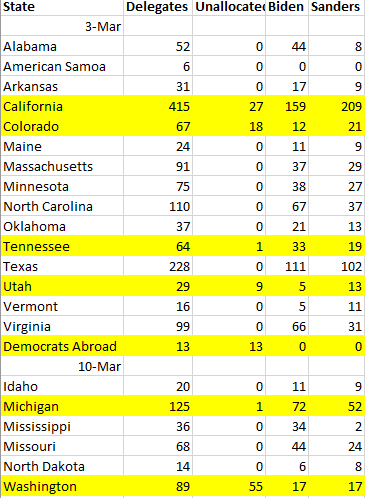 Of course you can use the math libraries and actually round, but this is a quick one-liner that truncates to two digits.

(Warning: If saying Castro had a decent literacy program offended you … you probably want to skip this comment). There’s one thing I think Trump does well — play the media. In the 2016 election, he didn’t need to buy a bunch of advertising because every major news outlet handed over HUGE chunks of airtime to him. Did they mean to? Probably not. They thought they were doing X and Trump was working the system to accomplish Y. I worry that the Democratic candidate this Autumn will be unable to complete with Trump because Trump is playing a different game. It’s like kitting up for a baseball game and showing up at a Formula One race. You might be an awesome baseball player … but you really should have brought a car. Bernie playing the media like this — because you *know* they weren’t there to cover an “I look forward to the debate Sunday” speech … they thought he was pulling out of the race — shows me that he can compete with Trump on issues *and* can play the media to his advantage.

And, yeah, I look forward to Biden answering for his history on Sunday. His fabricated Civil Rights legacy. Direct quotes where he is willing to cut Social Security. The money he’s received from credit card companies and how that influences his position on bankruptcy and consumer protections. His support of the PATRIOT Act — his pride that it’s based on legislation he drafted!

Letter sent to my Ohio State Representative and Senator:

I am writing to encourage you to support GA133 HB-546 introduced on 10 March 2020. The bill alters the definition of hybrid and electric vehicles to reclassify plug-in hybrid vehicles. These are vehicles that will both plug into an external source to charge for a modest electric range AND use the gasoline engine when the charge is depleted. Examples of vehicles in this category are Chevy Volt, Toyota Prius Prime, Chrysler Pacifica PHEV, Kia Niro PHEV, Honda Clarity, and Ford Fusion Energi. These vehicles are not intended to run on electricity alone — they use a combination of electricity and gasoline.

The first question, of course, is are there even “Bernie Bros”? And the answer may well be NO. Like Biden’s “giant delegate lead” being reported with over 100 delegates from Super Tuesday still unallocated and data from 44 machines in Texas missing, This may be a narrative that’s being reported with little supporting evidence.

There may be “Bros” but as a numeric rather than statistical fact — how many Twitter followers does Bernie have (highlight mine)? 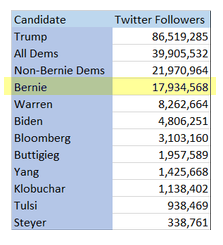 Even if we leave aside lexical sentiment analysis, the accuracy of which can legitimately be discussed. If we leave aside what actually constitutes negative commentary — someone who posts convey a negative-sentiment as they face bankruptcy after a serious illness isn’t the same as someone who attacks immigrants or espouses white supremacist beliefs — are the Bros Bernie’s? One thing people grappled with, back when the Internet first became a consumer offering, is that I may not be what I say I am. And not the type refuted by ‘yeah, there aren’t that many barely 18 girls on the planet’. “I’m a 32 year old guy living in Bloomington, IL who is really into R/C airplanes”. No way to tell — my ISP uses MPLS routing so my IP address geo-locates to Nebraska, Georgia, Pennsylvania, Arkansas, and North Carolina quite regularly. It’s not like social-media sites take any extreme measures to validate identify — a ten cent registration fee and your information needs to match up with the billing details, send us a copy of your cable bill, we need a copy of your birth certificate and state-issued ID card?! I’ve got friends who play games through Facebook who create additional accounts to “friend” and boost their game performance. Is it inconceivable that some 4-chann’er would create a social media account posing as a liberal? What percent of ‘Bernie Bros’ are MAGA’ers? How many MAGA’ers are trolls? What percent are Russian operatives? Does perpetuating the ‘Bernie Bro’ myth create division in America (i.e. something the Russians want)? Not saying there aren’t assholes who support Bernie. There are. And, statistically, I expect a significant percentage of those individuals to be active online. But what part of Bernie’s campaign is designed to *attract* assholes? But I don’t see evidence that Bernie’s supports have a higher percentage of assholes then any other campaign. A fortunate, but often ignored, facet of free speech is that freedom to speak freely does not imply freedom from consequences for your speech. Moving discourse online has significantly disrupted the threat of consequences.

Even if we discount the existence of real negativity and assume anyone who claims to be a Bernie supporter is a Bernie supporter … what can Bernie do about it? He’s already disavowed the comments and said he does not consider these individuals to be part of his movement. Is he supposed to get a warrant to unmask the identify of everyone who posts a snake emoji on Twitter and deliver a cease and desist letter? Drop by and speak to them about their online behavior?