We have turkeys in the coop! Anya put the little guys in the coop by themselves, and then she brought our friendliest hens in (one at a time) and hung out in the coop as a referee. Then she brought the Bresse hens in without problem. And finally our least friendly older hens and then each of the roosters. Everyone was fine. And, when I opened the coop this morning, the little turkey guys were out on the floor with the chickens — eating their food and ready for a refill on their water. 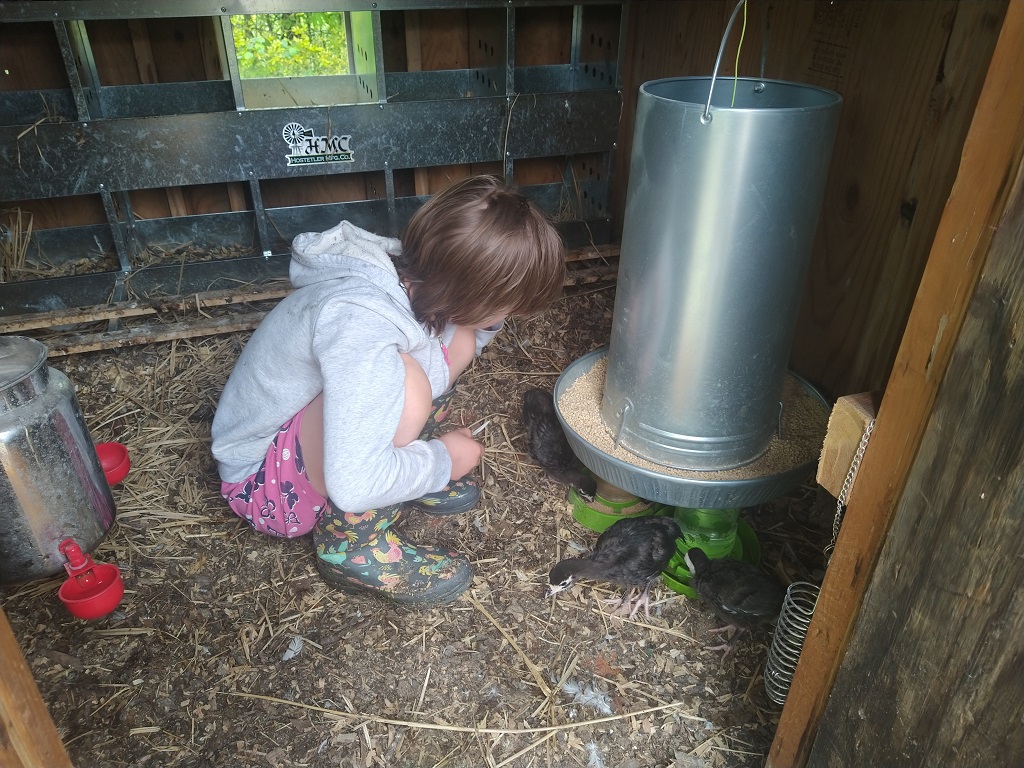 We picked up four friends for TurkeyGuy on Sunday. I wasn’t going to chance shipping again. We considered getting some of the franken-turk broad-breast things from Meyers down in Polk — I really don’t want to create demand for animals that grow so quickly their bodies give out. And a big draw to raising our own animals is that the animals make more all on their own. Luckily, I found someone about an hour away from here that’s really into breed preservation (and heirloom vegetables too!). So we went on a second adventure over the weekend and picked up four more Spanish Black turkeys. We had a great time meeting the folks at Ohio Heritage Poultry — and got to see all sorts of heritage turkeys. One of the coolest things is that they’ve got a Spanish tom that will sit on the nest — both turkey parents take turns keeping the eggs safe and warm, so each one gets a chance to run around, eat, drink … I’m hoping this is an instinctual thing that carries on with our turkeys because that seems so much healthier than a single bird isolating herself and barely budging from the nest.

Anya fed and watered our new poults before we headed home. The new guys are a little older than TurkeyGuy — we put the new guys into the brooder and they were instant friends. TurkeyGuy wants to be big like them — he stands with the largest poult and stretches his neck out so they’re the same height. Today, Anya set the baby tractor in a shady spot outside and took all of the poults on their first outdoor adventure. They’re such chill critters — they wandered around, pecked at clover, scratched around in the dirt, and napped. It’s going to be colder for the next week … but they’ll be happy to get outside again next week.

I figured out a good way to feed somewhat spry turkey poults — the really weak ones, we used a q-tip or pipette to feed … but the one that is walking around and doing turkey things. Well, some turkey things but not the ‘eating’ and ‘drinking’? I mixed the baby turkey chow (turkey & game bird starter) with some of the electrolyte water to make a mush. Then I put a little bit of the mush on my finger-tip. Spry baby turkeys love to peck at your fingertip. You can move your finger toward the bowl of mush, lower it into the mush, and get them to eat from the bowl. Even if they just eat the mush from your fingertip — they’re getting food and liquid.

Anya found another way to lure the turkey to its food — basically the cat / laser pointer game. We have a laser temperature gun, and she pointed the light onto the floor of the brooder. And moved the light as the little guy chased after it. When the light settles into the food or water, they’ll peck at it. You have to be careful not to get the laser light into its eye!

I’d spent a good bit of time, earlier this year, researching turkeys. I ultimately decided not to buy them this year — we were adding American Bresse chickens to our flock, and we are getting a few beehives. But we kept thinking about it — specially now that the Bresse are pretty much grown up. It was, however, too late to be ordering turkeys. They were all sold out! I managed to find one hatchery — Cackle — that had a “surplus” box of random heritage turkeys available. And hatching the very next day. We decided to order five, and the turkeys hatched basically the day we ordered them.

They shipped the little guys out the next day — and then we encountered the problem with sending live animals. The delivery was Friday. Then it was Saturday. Then it was Monday — that’s a long time for little guys to be trapped in a box! We rang up the USPS 800 number and our local post office this morning. The local post office offered to call us as soon as the truck got in — 4:30 AM — if we wanted. Better than waiting another four hours until they open. Luckily, the USPS folks in Akron were proactive about animal welfare and called me Saturday afternoon. He asked if we were expecting a shipment of live chicks. I said, “oh yeah; you’ve got our turkeys, turkey?” (because we all say turkey, turkey to each other all the time). He paused for a second to parse that out then said ‘yup’. He was concerned that the animals wouldn’t make it if they were sitting at his office for the rest of the day and all day Sunday. Did we want to come out there and pick them up? Yes! They’re even open 24/7. We wrapped up the work we were doing outside and drove right over. After I went into the distribution center and was directed to the chap who called, he called out “you here for your turkeys, turkey?” — always nice to come across goofy people.

Opening the box, we had two dead poults right off — one very dead, a second taking its last breaths. We got it a little liquid, but it was way too late. Between Saturday night and Sunday, most of the turkeys didn’t make it. We hand ‘fed’ them liquids to keep them hydrated, and we moved the less vigorous birds out of the brooder into a warm box so they wouldn’t get hurt by the ones that were walking around. The two slates and what I think was a Narragansett died too.

There’s a yellow poult that is still able to stand and open its eyes, but it’s quite weak. There’s a black one with a yellow head that’s doing well — it’s drinking on its own and venturing around the brooder pecking crumbles off the floor (and it’s found the food dish a few times too). I talked to the hatchery today because (1) the post office said that priority mail express is the only one with a guaranteed delivery time-frame  and (2) there wasn’t any food in the box. Turns out there is a delivery guarantee for live animal express mail. So the post office did screw up (not that it helps). They also put cubes of gel nutrient stuff in the box because it’s consumed and doesn’t leave trash — there’s enough for the three days that it’s supposed to take to deliver your birds (also doesn’t help, but made me feel a lot better about doing business with the company). We also had a chat about expecting delays given the logistics changes at the post office — mail essentially gets put on the truck the day after it gets to each hop, and it takes a lot longer for delivery. If four or six day delivery is going to be the norm, they should be putting four or six days worth of food cubes into the box!

Here are the possibilities for the turkeys we’ve got …

Bit of research in preparation for next year — I’m thinking Narragansett turkeys — they’ve got some dark quills (so aren’t the ‘perfect’ commercial turkey), but they’re great foragers and make more turkeys all by themselves (sadly, this is not something many commercially bred animals can do). They’re also pretty cool looking!