I’d seen some incredibly intricate soap molds online – the individual posting the pictures was wondering if anyone who had purchased some could verify the results were as beautiful as the product photos on the store site. No one knew. I don’t have any silicone molds that make a decent sized bar of soap. I’ve got a few that make really thin bars, and Anya loves the little bunnies and fairy. Scott has joked that I could improve some of my ‘cute’ crafts if I’d just put a dragon on it (I assume not a puffy baby dragon), and the seller has a number of dragon molds. So I bought a few molds and they were finally delivered!

Anya was so excited to see them – the soap was removed waaaaaay too soon and it hadn’t hardened. Unfortunately the intricate nature of the mold means your soap should be hard before unmolding. The upper right-hand corner broke off. But the soap is just as intricate looking and cool as the product picture. 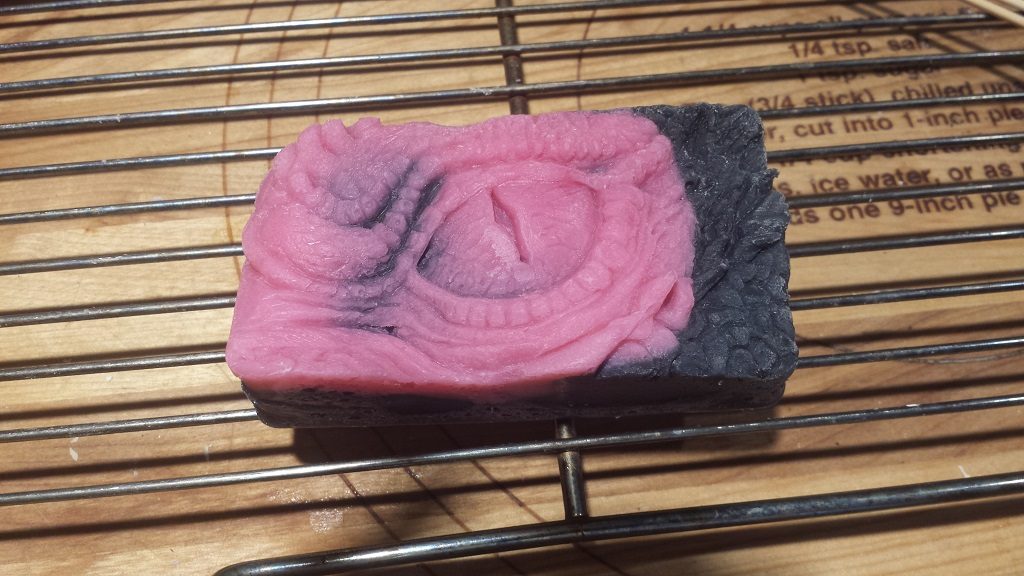 I made our saboun al ghar inspired soap today. First attempt at hot processing soap, and I had a massive soap explosion. I’d read that your container should be at least three times the volume of soap you are processing. I went with five times in an attempt to stave off a big mess. Blended my pomace olive oil and lye/water/salt mixture to a light trace, and set it over medium heat. It thickened, just like it supposed to. It turned into a gloopy oily mess, just like it supposed to. For future reference — the gloopy oily mess stage is where you want to keep a close eye on it and don’t look away for a minute. I turned back around and saw odd foamy soap stuff pouring out of the pot. Oops!

The whole mess was glopped into my large silicon lined wooden soap mold. Now it just needs to set for a while and harden.

Most old civilizations have traditional artisan production processes that are hard to sustain in the modern world. Some cheeses in Southern France were sustained through government grants until EU regulations considered such support unsporting. Su filindeu pasta now only made by three people in Italy. As war ravages a country, even well sustained traditional methods become endangered. The civil/proxy war in Syria has displaced most if not all producers of صابون الغار (‘Aleppo soap’). While we may not be able to faithfully reproduce the exact process to create what may be the world’s oldest hard soap, I think it is important to preserve the knowledge of the process. The ingredients and proportions. The time and temperature of processing, how the soap is poured onto floors to cool and set whilst being walked on with wooden boards to flatten it out. How it is cut and stacked to cure.

In addition to documenting and preserving the process, derivative processes are developed to preserve some facet of the original product. Fact is, a lot of products are not protected by AOC, PDO, or any of the other “X has to be made in Y using the historic technique Z” regulations. Like the unfortunate not-Cheddar cheese that I find in many American grocery stores, Aleppo soap could be made with coconut oil and dye. And maybe that’s where the objection to cultural appropriation comes from — not an objection to someone respectfully trying to reproduce a cultural artifact but of someone bastardizing the artifact for profit or fashion. Reproducing sacred items for frivolity.

After reading about the displaced soap masters, I want to make a soap inspired by the Aleppo process. I need more experience with hot processing soap to follow the traditional long cook method, but I want to hot process the soap to control which oils comprise the superfat. Fully saponify the olive oil, then add the laurel berry oil and saponify some of it.

Then comes the actual recipe – the challenge with traditional soap recipes is that the saponification factor of ash varies. Buying sodium hydroxide yields a consistent product useful in recipes with precise measurements. Ghar soap recipes have percentages of olive oil to laurel berry oil, but more or less call for enough ash. I’m debating between five and ten percent superfat. Five percent seems fairly standard for soap recipes, so I’m leaning in that direction. But I wanted to continue researching authentic recipes before finalizing my ingredients. 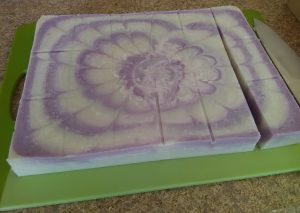 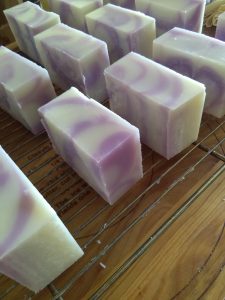 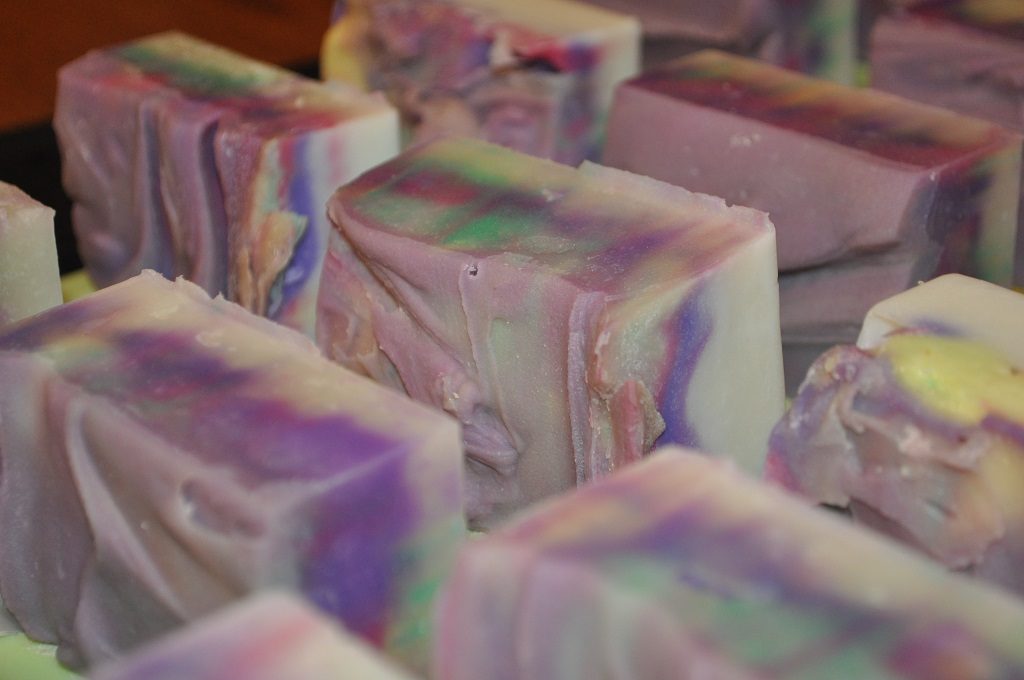 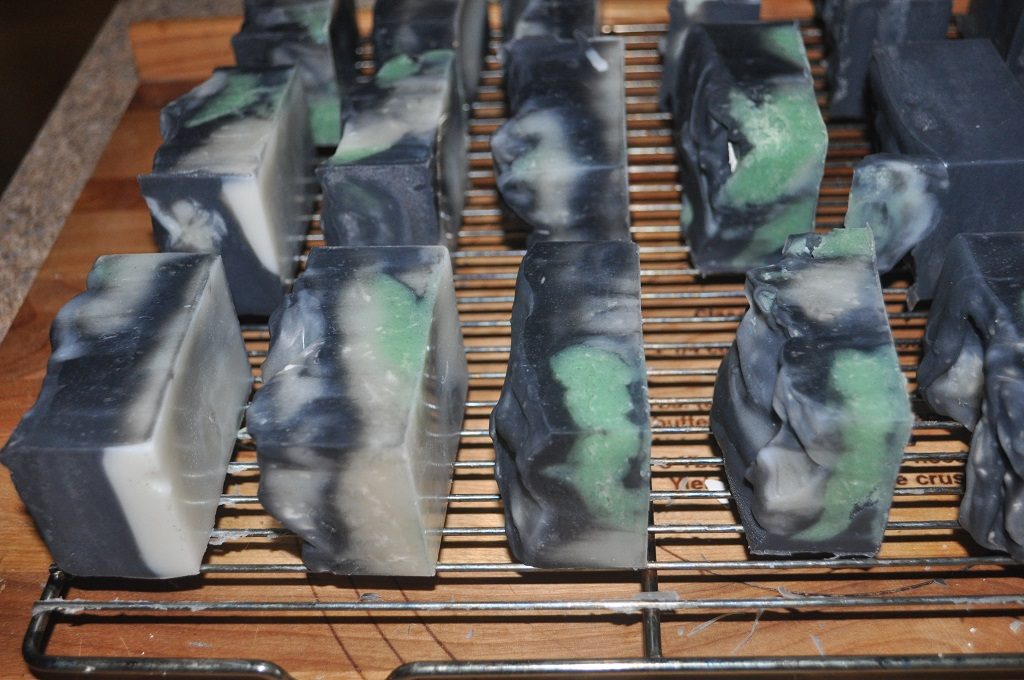 For a few years, I’ve been using this coconut oil recipe almost exclusively. I’ve added clay to color holiday soaps, but beyond that we’ve got the same basic pure white soap. I get 35 pound pails of coconut oil from a local distributor, Bulk Apothecary, and avoid shipping fees. You can make a lot of soap with 35 pounds of coconut oil (a year supply for us, plus a bunch to give away).

I’ve wanted to make a pumice soap with orange essential oil for cleaning greasy hands (like Fast Orange) for some time. Decided to make a couple other ‘special’ batches of soap too.

A ‘mechanic’ soap with pumice and orange essential oil for cleaning greasy hands. The soap will be 5% superfat instead of the normal 30% to aid in cutting greases:

I’ve been making my own soap for about three years now. I’ve used several different recipes, but my default is a 100% coconut oil soap recipe. I double the recipe to make a six pound batch of soap (66 oz coconut oil, 9.6 oz lye, 19.2 oz water, and 3-6 oz of essential oil if I add any).

The process is quite easy — put the oils (or oil, in this case) in a pot and heat until melted. 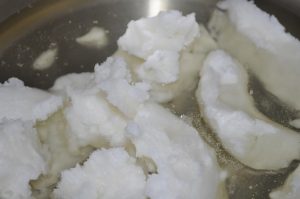 In a safe container (heat resistant plastic like polypropylene 5), combine the water and lye slowly — it gets HOT. I use a graduated pitcher from a science supply center. Soap recipes have a weight of water and not volume, so the markings aren’t useful for this particular application. 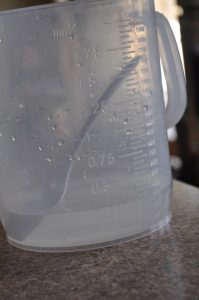 I turn the oven light on – it’s an incandescent bulb and heat the oven to about 110 degrees F. I then put the lye container and warm oil in the oven and let them set for an hour or so to reach thermodynamic equilibrium.

When the hour is about up, get everything ready. Always a stick blender. If essential oil, colorant, herbs, or abrasives are going to be added, I weigh them out and have them waiting. Remove the pot of oil and set it somewhere (Not a hot burner! This was the one thing that absolutely stumped me on my first batch.). Set the stick blender in the pot. Get the container of lye water. Turn on the stick blender and get the oil moving. Slowly add the lye mixture. 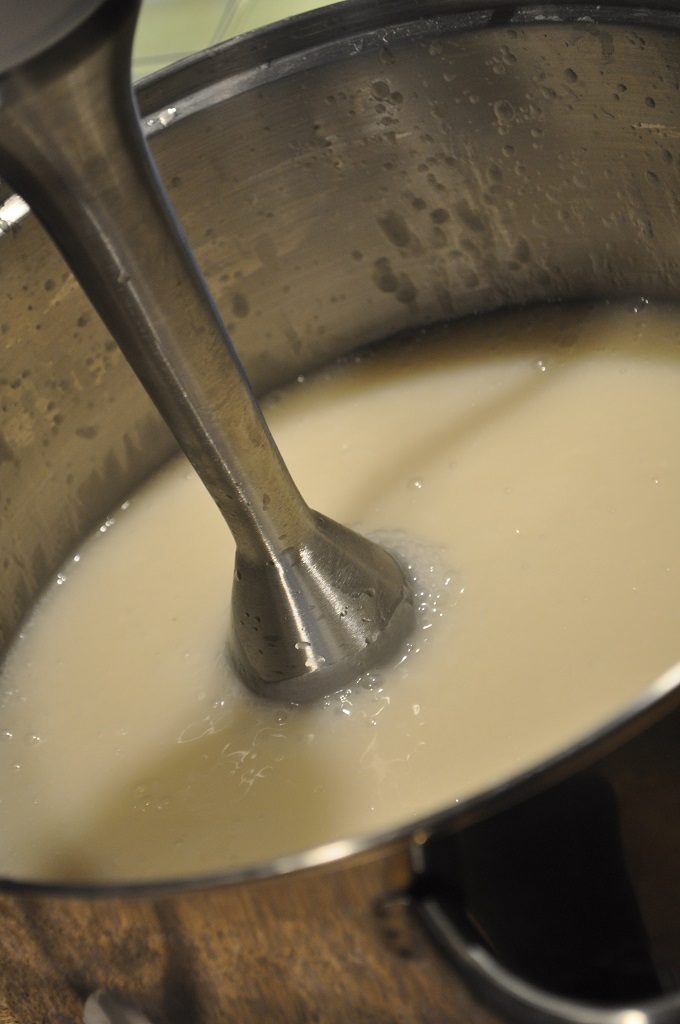 Keep the stick blender going until you reach ‘trace’ — kind of like making whipped cream or egg whites where there’s a soft peak and a firm peak state. You’re looking for it to thicken up enough that lines will form or a little bit dropped back into the pot stay in a little mound. You are NOT looking for something that holds peaks (it would be difficult to get into molds at that point).

If you are adding ‘stuff’ you want to do that at the first sign of trace. Some add-ins will accelerate trace (basically harden your soap quicker), and adding them into a medium trace can get you a big block of solid soap pretty quickly.

Once the soap mixture reaches trace, put into the soap molds. Tap the molds on a solid surface a few times to remove air bubbles. I place these molds on a cutting board (hard surface) and then place them back into the warm oven. Proper instructions tell you to wrap it up in towels to retain the heat. After about 12 hours in the warm oven, I turn off the oven light. Let it sit a few more hours to cool, then set on the counter overnight. If the soap is hard to get out a mold, pop the whole thing in the freezer – frozen soap pops right out.

Voila, you’ve got soap. Let it sit for a few weeks to cure (dry out).