You can even view the xmax and xmin values by specifically asking for them in a select statement: select *, xmin, xmax from TableName;

The transaction ID is stored in a 32-bit number — making the possible values 0 through 4,294,967,295. Which can become a problem for a heavily I/O or long-running database (i.e. even if I only get a couple of records an hour, that adds up over years of service) because … what happens when we get to 4,294,967,295 and need to write another record? To combat this,  Postgres does something that reminds me of the “doomsday” Mayan calendar — this number range isn’t aligned on a straight line where one eventually runs into a wall. The numbers are arranged in a circle, so there’s always a new cycle and numbers are issued all over again. In the Postgres source, the wrap limit is “where the world ends”! But, like the Mayan calendar … this isn’t actually the end as much as it’s a new beginning. 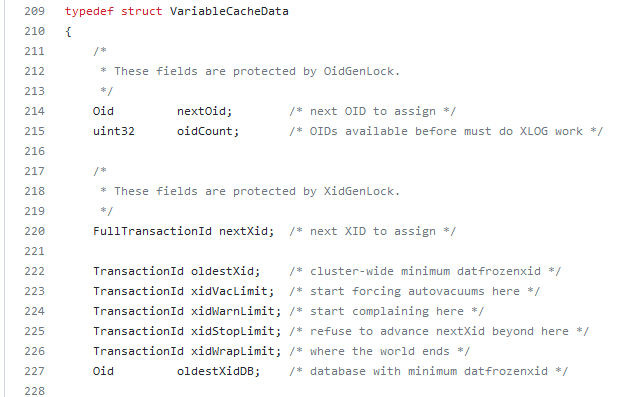 How do you know if transaction 5 is ‘old’ or ‘new’ if the number can be reissued? The database considers half of the IDs in the real past and half for future use. When transaction ID four billion is issued, ID number 5 is considered part of the “future”; but when the current transaction ID is one billion, ID number 5 is considered part of the “past”. Which could be problematic if one of the first records in the database has never been updated but is still perfectly legitimate. Reserving in-use transaction IDs would make the re-issuing of transaction IDs more resource intensive (not just assign ++xid to this transaction, but xid++;is xid assigned {if so, xid++ and check again until the answer is no}; assign xid to this transaction). Instead of implementing more complex logic, rows can be “frozen” — this is a special flag that basically says “I am a row from the past and ignore my transaction ID number”. In versions 9.4 and later, both committed and aborted hint bits are set to freeze a row — in earlier versions, used a special FrozenTransactionId index.

There is a minimum age for freezing a row — it generally doesn’t make sense to mark a row that’s existed for eight seconds as frozen. This is configured in the database as the vacuum_freeze_min_age. But it’s also not good to let rows sit around without being frozen for too long — the database could wrap around to the point where the transaction ID is reissued and the row would be lost (well, it’s still there but no one can see it). Since vacuuming doesn’t look through every page of the database on every cycle, there is a vacuum_freeze_table_age which defines the age of a transaction where vacuum will look through an entire table to freeze rows instead of relying on the visibility map. This combination, hopefully, balances the I/O of freezing rows with full scans that effectively freeze rows.

What I believe led to our outage — most of our data is time-series data. It is written, never modified, and eventually deleted. Auto-vacuum will skip tables that don’t need vacuuming. In our case, that’s most of the tables. The autovacuum_freeze_max_age parameter sets an ‘age’ at which vacuuming is forced. If these special vacuum processes don’t complete fully … you eventually get into a state where the server stops accepting writes in order to avoid potential data loss.

So monitoring for transaction IDs approaching the wraparound and emergency vacuum values is important. I set up a task that alerts us when we approach wraparound (fortunately, we’ve not gotten there again) as well as when we approach the emergency auto-vacuum threshold — a state which we reach a few times a week.

Using the following query, we monitor how close each of our databases is to both the auto-vacuum threshold and the ‘end of the world’ wrap-around point.

If we are approaching either point, e-mail alerts are sent.

When a database approaches the emergency auto-vacuum threshold, we freeze data manually —  vacuumdb --all --freeze --jobs=1 --echo --verbose --analyze (or –jobs=3 if I want the process to hurry up and get done).

Adding a WHERE clause after the table name limits the rows that are included in the publication — you could publish employees in Vermont or only completed transactions.

Quick SQL command to report the delta between the current and confirmed flushed LSN’s:

Commented to explain what each column means:

Development servers can be accessed directly, but access to our production Postgresql servers is restricted. To use a SQL client from the VPN network, you need to connect through an SSH tunnel.

In the connection configuration for a database connect, click the “SSH” tab. 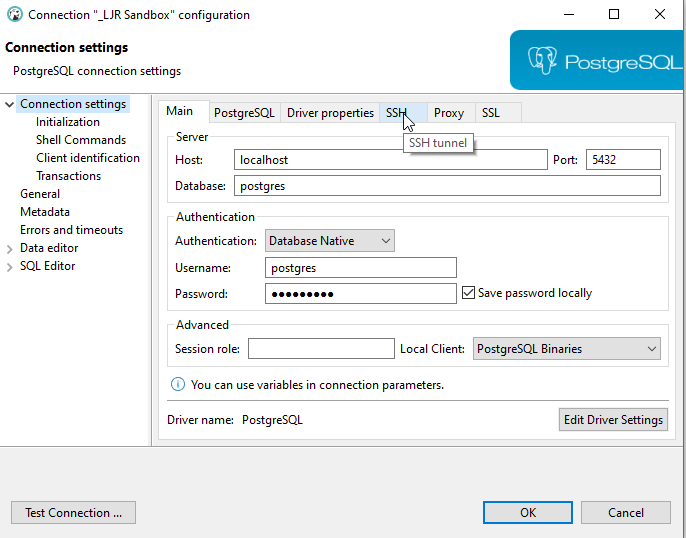 You can one-off configure an SSH tunnel for a connection, but the most efficient approach for setting up the SSH tunnel used to connect to all of our production databases is to create a tunnel profile. The profile lets you type connection info in one time and use it for multiple servers; and, when you need to update a setting, you only have one configuration set to update.

To create a profile, click the pencil to the right of the profile drop-down box.

Under the “Network Profiles” section, click “Create” to create a new profile.

Give the profile a descriptive name and click “OK”.

Check the “Use SSH Tunnel” box, enter the hostname (one of the ETL dev boxes is a good choice in our case – ltrkarkvm553.mgmt.windstream.net. Supply the username for the connection. You can use password authentication or, if you have a key exchange set up for authentication, select public key authentication. Click “Apply and Close” to save the profile. 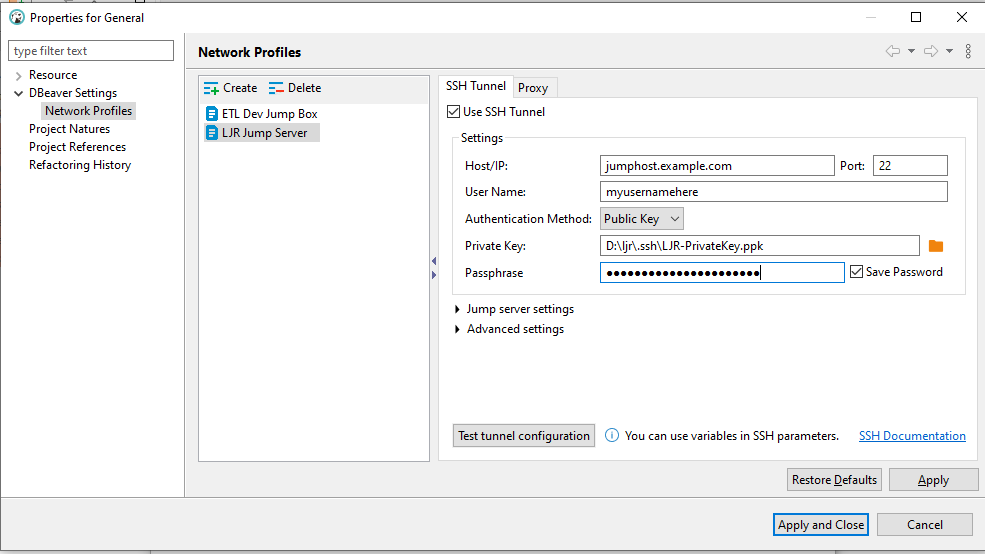 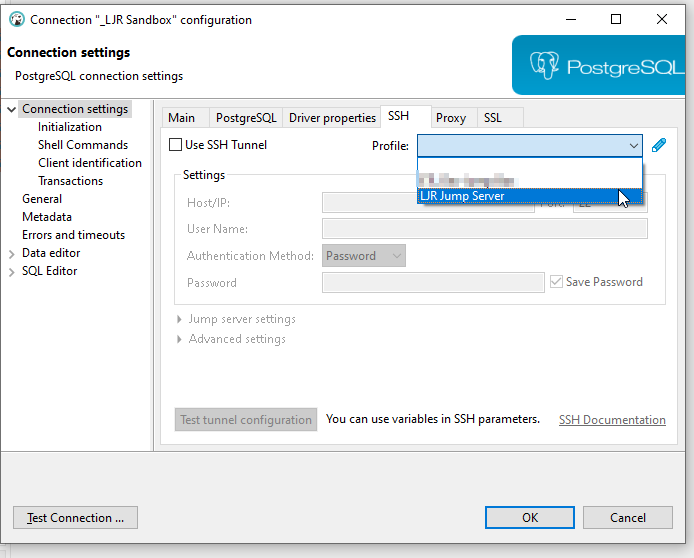 And all of the settings will pop in – they’re grayed out here, if you need to update the SSH tunnel profile settings, click the little pencil again. 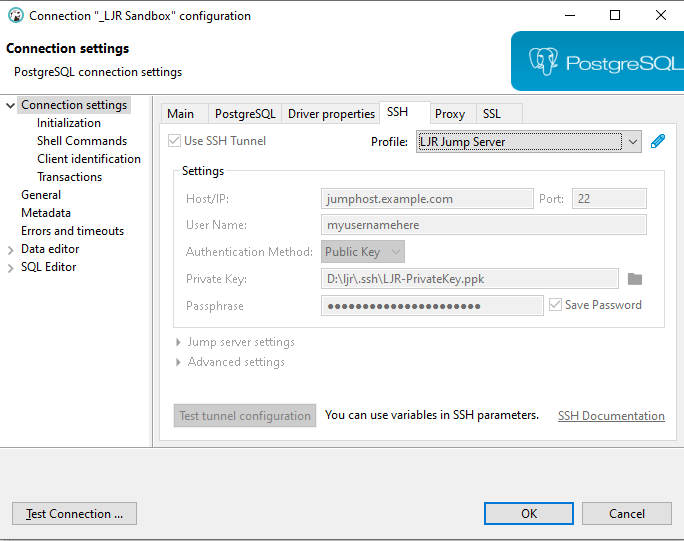 I’m having a problem with a database refusing to change INSERTS to UPDATES on the ON CONFLICT condition — it insists that a ‘duplicate key value violates unique constraint’. A little time with a search engine tells me that sequences can get out of sync, and then you cannot insert items into the table. How do you know your sequence is out of sync?

So null seems like it would be a problem! 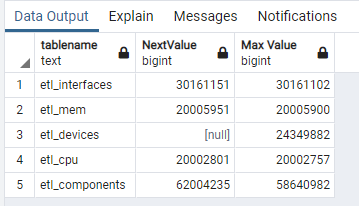 For future reference, when the next value is smaller than the max value in the table, the solution is to set the series value based on the max value