I’ve tried knitting a number of times with no success. My stitches are far too tight, and it is an effort to work every single stitch. Unlike crocheting, where I can work a stitch every second or two, knitting the first row of a scarf takes me twenty minutes. I’d shown Anya how to crochet, but holding the fabric, hook, and yarn tail took too much coordination. She wanted to try knitting instead … beyond my inability to knit, I don’t see the two knitting needles and yarn involving less coordination. But I remembered using a knitting loom when I was small. I picked up a set of round looms and a set of rectangular ones. Because the loom frame holds the fabric and the yarn tail can be anchored to the loom, minimal coordination is needed.

We’ve been making hats and scarves all day. The cheap plastic ones from the local craft store are great for making thick wintery stuff — the scarf below uses two skeins of DK-weight yarn twisted together because I don’t have much bulky weight yarn. The loom is also good for making “lacey” fabrics — a large, open knit. But a loom with smaller spaces between pegs is needed to make lighter fabrics. 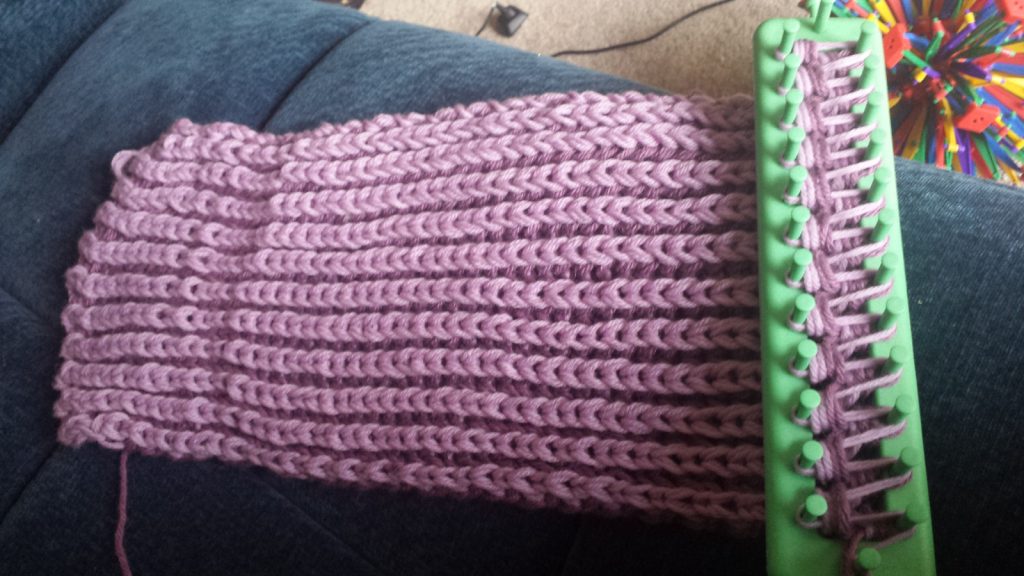 This is a two-colour brioche stitch using